Introduction: Where do you begin?

Since the publication of its first issue in the middle of 1963, the Avengers has grown into a tent pole franchise, helping to hold up both the shared medium called the Marvel Universe and the publication company known as Marvel Comics. Like most of the titles in the early days of the company, the Avengers was a runaway hit, though it would certainly have its ups and down during the intervening decades. Now over half a century gone by, it has evolved into a movie franchise that earned billions at the box office.

Unfortunately, with decades of publication history come decades of continuity history, which can be overwhelming at best and discouraging at worst. Fortunately for readers, the very nature of the Avengers title itself is self-renewing in the sense that characters are rotated in and out, allowing jumping on-points for new fans and keeping things fresh for old ones. Still, while self-contained stories are great for the uninitiated, one of the joys of continuity fiction is building upon that which came before and calling back to stories from long ago.

The purpose of this article is to give a crash course on the Avengers franchise and help a newer reader to understand what fits where in its vast history – when this character joined, when that villain first appeared and when those famous storylines occurred. Spoilers will be kept to a minimum but, needless to say, some will be unavoidable.

"There came a day, a day unlike any other, when Earth's mightiest heroes found themselves united against a common threat. On that day, the Avengers were born - to fight the foes no single super hero could withstand! Heed the call, then - for now, the Avengers Assemble!"

This tagline, appearing first in Avengers #123 in 1974, ran at the beginning of every issue for many years. It perfectly summed up the premise of the series, in which heroes (i.e. characters) came together to form a sum greater than their individual parts. Unlike the group of heroes appearing in the X-Men title, the first issue of which was published the same month as Avengers #1, or the Fantastic Four from two years before, the characters in the Avengers did not originate in that title. Rather, they were stars (or co-stars) of their own, respective books. As such, appearances of these characters in Avengers were in supplement to stories in their own titles and gave readers a new venue to follow their adventures.

By 1963, the Marvel Universe had been around for two years and in that short time had introduced numerous characters. While a few characters had their own title, most of Marvel’s line of titles were anthology books consisting mainly of two stories around ten pages each (give or take), each featuring an unrelated tale. In the late 1950s, these might have been two different science fiction stories, similar in nature to a Twilight Zone episode, or perhaps more accurately one of the ironic-twist ending science fiction stories from the then-defunct Weird Science and Weird Fantasy series published by EC Comics earlier in the decade. However, with the rise of super-hero characters in the Silver Age, each short story would now feature a different hero.

In the early months of 1962, the Fantastic Four had already been around for half a year but it was still a little too early to tell if the success of this superhero genre was a legitimate trend or just a 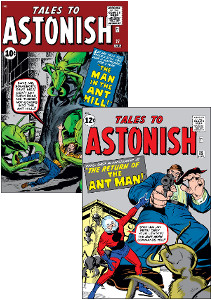 fad for the newly named Marvel Comics. A title with a slightly longer track record was Tales to Astonish, one of the science fiction anthologies. The very name of the title was meant to evoke its fantasy background. It was filled with stories of monsters, aliens and the time-honored trope of scientists meddling with things best left alone. In the tradition of this latter story type, Tales to Astonish #27 brought the cautionary tale of scientist Henry Pym, who had invented a shrinking serum. In the short, 7-page story called “the Man in the Ant Hill!” Dr. Pym inadvertently shrank himself, without thinking ahead about access to his corresponding “enlarging serum.” A series of decisions equally lacking foresight caused Pym to be lost in an anthill and almost eaten alive by the colony. Due to a combination of good luck and a helpful ant, Pym reached his enlarging serum and returned to his normal height. As with most stories of this kind, Pym destroyed his creation, deciding it too dangerous to be used by any human again. Though this was clearly meant to be a one-off story, writer Stan Lee would remember this character and revive him and his shrinking serum again later that same year in Tales to Astonish #35, transforming him into Ant-Man.

Between Pym’s initial anthill adventure and being christened the Ant-Man, another scientist

named Bruce Banner made his first appearance in Incredible Hulk #1 in May 1962. Much like Pym, Banner was a victim of his own creation, in this case in a fictional depiction of the real-world’s then ongoing arms race. Due to the domino effect of interventions by a fearless teenager and a Soviet spy, Banner was exposed to the radiation of the gamma bomb he had created, transforming him into the Hulk. Though the Hulk began in his own series, the Incredible Hulk was not one of the early success stories of Marvel and it was canceled with #6 in March 1963. Following the cancelation of his series, the Hulk would next appear as a founding member of the Avengers, though his tenure would be short. It would not be until late 1964 that the Hulk would star in his own solo stories again, though it was not in his own series. Rather, he would share co-feature status with Hank Pym’s Ant-Man beginning with Tales to Astonish #59.

A few months after the Hulk’s first appearance, another anthology series introduced the mighty Thor with Journey into Mystery #83. While most creators reached back to Greek stories when dealing with the mythological, co-creator Jack Kirby was more interested in the Norse myths. Popular from the beginning, Thor would immediately gain cover billing on the series, but it would be the next year with #91 that the entire book would be dedicated to the thunder god’s tales. Even then, he shared the book with a short “Tales of Asgard” feature, a status quo that would continue for years. As time passed, “Journey into Mystery” became “Journey into Mystery with Thor,” until eventually it changed its name simply to “the Mighty Thor.” The title would keep this name for decades.

The same month as the cancelation of the Hulk’s ongoing title, March 1963, saw another technological genius cursed by his own ingenuity. In Tales of Suspense #39, industrialist and engineer extraordinaire Tony Stark nearly died in the jungles of Vietnam. He only survived thanks to a suit of armor created by himself and fellow prisoner and scientist Ho Yinsen. Returning to the United States, Tony Stark became the hero known as Iron Man, the exploits of whom were chronicled every month as a co-feature in Tales of Suspense.

Back in Tales to Astonish, scientist Henry Pym had continued his adventures as the Ant-Man. However, his life as a solo adventurer would end with the introduction of Janet van Dyne. Breaking the mold of the male hero having a standby girlfriend, unaware of the hero’s identity, in her first appearance not only did Pym reveal himself to be Ant-Man but he made Janet his partner, transforming her into the Wasp. In the story, Janet’s father, a scientist in his own right, had been murdered and Pym saw Janet as a potential ally to aid him in taking down those responsible. In a bit of almost certainly unintended foreshadowing, Janet even voiced her desire to avenge her father.