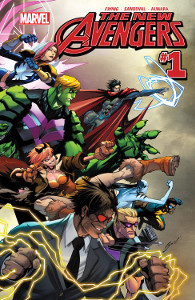 Many new series emerged from the events of Secret Wars, collectively promoted by Marvel as being part of the “All-New, All-Different Marvel” relaunch. Among those new titles were several new books, including New Avengers (4th series), the first issue of which hit the stands in December 2015. In this series, billionaire Sunspot had successfully completed a hostile takeover of Advanced Idea Mechanics and had repurposed it for good as Avengers Idea Mechanics. Based on their floating Avengers Island, located in international waters off the coast of California, Sunspot attempted to convince the rest of the world of his intentions. Humorously, SHIELD sent Hawkeye as an infiltration agent, a truth to which the archer confessed without prompting upon arrival. Unfortunately, despite his best efforts, Sunspot could not avoid coming into conflict with SHIELD and it soon became clear that his plan would not work. Instead, Sunspot’s AIM was folded into SHIELD as its intelligence division, becoming American Intelligence Mechanics. The series ended with #18 in January 2017.

Another title to emerge in December 2016 was the All-New, All-Different Avengers. Apparently intended to be the new “core” Avengers title, the series featured old Avengers Iron Man and Vision, but filled in the rest of the cast with new incarnations of old hero identities. Among these new incarnations were Nova (Sam Alexander), Ms. Marvel (Kamala Khan), Spider-Man (Miles Morales), Captain America (Sam Wilson) and Thor (Jane Foster). Following the Civil War II storyline that began that summer, a number of the young heroes departed to form the new Champions. This “All-New, All-Different” title ended a few months later with #15 in December 2016 to allow for the brand new Avengers (6th series). 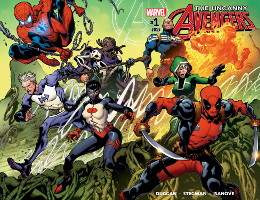 Although Uncanny Avengers (2nd series) seemed to have deliberately been a finite series, Uncanny Avengers (3rd series) debuted in December 2015 to a more aspiration issue count. As with the initial series, the Avengers’ “Unity Squad” intended to demonstrate to the public the ability of mutants and humans heroes to work together. Following the recent conflict between the X-Men and the Inhumans regarding the Terrigen clouds circling the planet, a new faction was to be added to “unity” part of the equation – Inhumans.

In the summer of 2016, it had been a full decade since the Civil War miniseries had torn apart both the heroes of Marvel Comics and the fans who read them. At least in part, history would repeat itself when Civil War II hit the stands. The core part of the crossover was a 9-issue 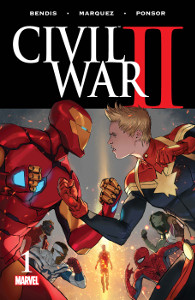 miniseries, preceded by a #0. In the story, the heroes were posed with a quandary – should they act on intelligence gained from a new Inhuman precog named Ulysses, using his foresight to stop crises before they occurred? Leading the camp for using the information was Carol Danvers, who as Captain Marvel believed in saving lives no matter what. On the other side of the question was Tony Stark, who believed that the precog’s powers were untested and potentially unreliable, and that people should not be arrested or incarcerated for crimes that they had not yet committed. Tensions rose when Jim Rhodes died and She-Hulk was nearly beaten to death on a mission ordered based on precog-generated intelligence. However, debate turned into another “superhero civil war” after Bruce Banner was killed by Hawkeye before he could go on a Hulk-enhanced killing spree, only for the archer to be cleared of all charges. Eventually the heroes did learn that Ulysses’ powers were indeed fallible and the whole debate was rendered moot when he transformed into a cosmic being and left Earth. 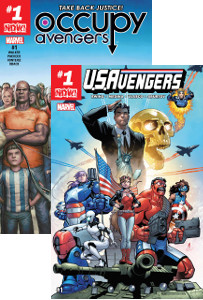 Continuing the story left over from the end of New Avengers (4th series), the title of “U.S. Avengers” followed the American Idea Mechanics and its tenure as an intelligence division for SHIELD. Sunspot led the team under the identity of Citizen V and was joined by his old friend Cannonball, Squirrel Girl, a new Iron Patriot, a new Red Hulk and Enigma. The series proved short-lived and ended with #12 shortly after the end of the Secret Empire crossover event that occurred in the latter half of 2017.

Another short-lived series debuting in early 2017 was Occupy Avengers, which focused on Hawkeye as he traveled the United States while dealing with the fallout of his actions during the events of Civil War II. Along the way, he would run into old allies and old villains. The series ended with #9 in September 2017, its final two issues dealing with the events of the Secret Empire crossover. 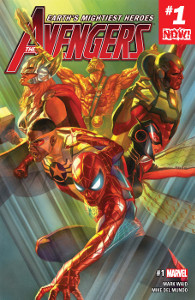 In January 2017, a new Avengers #1 (now the 6th series to bear that name) launched, written by Mark Waid. Emerging from the All-New, All-Different Avengers title, which had ended the month before, the new Avengers series was like the series of old – Earth’s Mightiest Heroes. Rounding out its cast were the Sam Wilson Captain America, the original Spider-Man, the new Thor, the Vision, the new Wasp (the daughter of Hank Pym) and Hercules. In their first story, the Avengers faced a confounding time-traveling adventure involving Kang and then they worked with a reformed Doctor Doom. The series ended with #11 following the end of the Secret Empire storyline. However, to be more precise, the series did not end… but was renumbered.

In the summer of 2016, most of the Avengers titles had participated in a small crossover called “Avengers Standoff!” written by Nick Spencer. Bookended by Avengers Standoff: Assault on Pleasant Hill issues labeled “Alpha” and “Omega,” the storyline began with a simple investigation into a clandestine SHIELD super-prison called “Pleasant Hill.” This simple investigation led to the realization that a sentient cosmic cube named Kobik was being employed to keep the prisoners docile. At the end of the story, Kobik had restored the aged Steve Rogers to his prime, allowing him to retake the mantle of Captain America. Unknown to all present, however, was that the Red Skull had sabotaged Kobik and the sentient cosmic cube had retroactively transformed Steven Rogers into a Hydra sleeper agent.

Spencer continued to explore this dual personality of Rogers in his new title, Captain America:

Steve Rogers, which was published simultaneously alongside the title Captain America: Sam Wilson, also written by Nick Spencer. Both series culminated in Spencer’s controversial Secret Empire crossover event, which ran for from June to October 2017. The core of the series was a 10-issue miniseries (not counting a #0 prequel issue) but it intersected with several supplementary miniseries and a dozen other titles. In the story, Roger’s long months of planning paid off with Hydra taking over the United States, transforming it into the fascist state. The heroes which remained free struggled as best they could but were overwhelmed. After realizing the influence of the Cosmic Cube in their situation, the Avengers worked to assemble its shards and ultimately used it to undo not only Roger’s corruption but the horror of a Hydra-controlled America.

Following the end of the Secret Empire event, Marvel embarked on an initiative it called “Marvel Legacy.” In recent years, many of their most long-lasting properties had seen replacements with 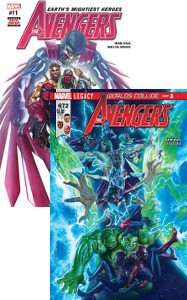 newer versions and by 2017 it had been determined that they had possibly been alienating older fans in doing so. In addition to addressing this in the individual series, Marvel decided to address the question of their issue numbering systems. As core series being relaunched with a new #1 had become commonplace in the previous decade, it had become confusing to irregular readers where what series or issue might take place. To address this, Marvel took a page from the trend in 2003 & 2004 by renumbering their main titles. The number utilized in these books would add together the numbers from previous series.

However, this new numbering system was not to last either. After ending the series with #690 at the conclusion of the "No Surrender" storyline, the Avengers relaunched with a new #1 in May 2018, making it the 7th series to bear that name.