During the early 1990s, the comics industry had gone through a period of rapid expansion, with a speculator market driving sales of comics for nearly all publishers. Marvel was at the top of this trend, breaking modern sales records with 1990’s Spider-Man #1, 1991’s X-Men #1 and 1991’s X-Force #1. However, as with all booms comes the inevitable bust. Titles that began with a flash in the early 1990s found themselves canceled in the mid-90s, along with titles that had been around long before the boom had started. In January 1994, Marvel canceled Avengers West Coast with #102, the nine-year west coast experiment coming to an end. Wonder Man was canceled the same month with #29 and Quasar suffered the same fate in July with #60. Worse for Marvel, the long published titles of Avengers, Iron Man, Thor and Captain America also suffered. 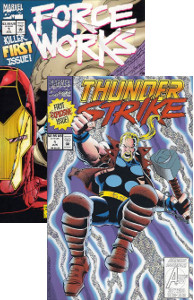 Still, Marvel tried to revive their flailing series. A few months after Avengers West Coast’s cancelation, there was a genuine attempt to continue the book in a different form with a title called Force Works, which launched in June 1994. Intended as part of a separate “Iron Man” line of titles to support the Saturday morning cartoon and toyline, Iron Man and Force Works were joined by War Machine, another spinoff Iron Man character and book. Thor also received a sister title when his former replacement became “Thunderstrike.” Avengers Unplugged, one of a series of 99¢ titles aimed specifically at newsstands, was also thrown into the market. The following year, Marvel attempted an alternate, “soft” reboot of the other Avengers titles with a crossover called “The Crossing.” Among other changes to long established characters, the adult Tony Stark was replaced with a teen version of himself and the Wasp metamorphosed into an insect-like form. No doubt intended to revitalize these characters, they were instead rejected by fans and sales grew worse.

At the height of the speculator market in 1992, some of the most popular artists at Marvel left the publisher to form their own company. The result was Image Comics, which soon became the most influential comic publisher after Marvel and DC. In 1996, two of the founders at Image, Jim Lee and Rob Liefeld, were approached by Marvel with a proposal. They would take over the flailing titles of Fantastic Four, Iron Man, Avengers and Captain America for a proposed period of one year. Lee and Liefeld accepted and the project was named “Heroes Reborn.”

Within the context of the ongoing continuity in the Marvel Universe, the beginning of Heroes Reborn would be birthed from a crossover running through the X-Men titles. In the X-books, it was

learned that Professor X’s mind had been corrupted by Magneto’s darker side, resulting in the creation of a being called Onslaught. During the final battle, the X-Men and Avengers realized that non-mutants were weakening him. In an act of ultimate self-sacrifice, the Fantastic Four and most of the Avengers rushed into the energy field that comprised the Onslaught creature. The result was that Onslaught was defeated but the world’s most beloved heroes were now dead. In September 1996, the titles of Avengers, Captain America, Iron Man and Fantastic Four were all canceled. Two months later, all four titles were relaunched with new creative teams and new #1s. Other titles like Thunderstrike, War Machine, Force Works, Avengers Unplugged and even Thor were simply cancelled.

The Heroes Reborn relaunches were a bit of a mixed success. While Jim Lee’s Fantastic Four and Iron Man series were highly regarded, the Avengers and Captain America series under Rob Liefeld’s control suffered from low sales. After seven issues, Marvel exercised an option in their contract to retake creative control of the remaining run and gave the Avengers book to Walt Simonson. Although each series was only intended to run twelve issues, a special thirteenth issue was allotted to each title as a coda, each written by James Robinson. All four series ended in November 1997. The following month, with very much fanfare, Marvel released a weekly, 4-issue miniseries unimaginatively named “Heroes Reborn: The Return.”

The Avengers were back.

If the Heroes Reborn experiment had taught Marvel anything, it was that the Avengers were a property readers would buy if the product was good enough. To that end, Marvel enlisted two “A” 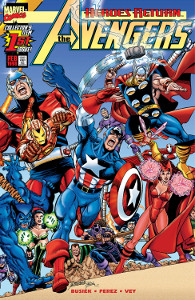 creators – writer Kurt Busiek and penciler George Pérez. Two months after “The Return,” Avengers (3rd series) #1 was released in February 1998 and everything seemed new again. The first three issues featured a massive story including every character who had ever been an Avenger. New members were brought on as well. Former New Warriors members Justice and Firestar were inducted, as well as the brand new character of Triathlon. Old plot points were brought back to the fore. Wonder Man, who had been killed in the early issues of Force Works, found his way back, thanks to the magic and the love of the Scarlet Witch. Their burgeoning romance led to conflict with the Vision, who by this time had recovered all of his emotions, including his own love for his ex-wife. Along the way, the Avengers faced against perennial enemies of Ultron, Kulan Gath and Count Nefaria.

Aside from the Avengers title itself, Busiek penned a 12-issue maxiseries called Avengers Forever, which ran from late 1998 into early 2000. In this series, Busiek drew upon the whole history of the Avengers, tying disparate story threads together into a complicated narrative that served to explain the history of Kang, his past as Rama-Tut and his future as Immortus. It also dealt with the Destiny Force, the near-limitless power into which Rick Jones had tapped so long ago to end the Kree-Skrull War.

of Baron Zemo, each villain had assumed a new identity and begun superhero activities, all with the intention of luring governmental agencies into trusting them so that the “Thunderbolts” could gain access to the world’s security networks. However, just as they reached their goal, the true Avengers returned and recognized the Thunderbolts for who they really were. Still, Zemo would have prevailed had it not been for the rest of his Thunderbolts switching sides, wishing to atone for their past crimes. [Thunderbolts (1st series) #1-13] The Thunderbolts would gain greater legitimacy when Hawkeye joined the team as leader, navigating the former criminals to the side of the angels. Hawkeye would remain with the team for several years. [Thunderbolts (1st series) #20-75]

The first event in the post-Heroes Reborn universe arrived in the year 2000’s “Maximum Security” storyline. The core of the series was a 3-issue miniseries, preceded by a #0 special, but it touched

on all of the books in the Avengers lineup, as well as several of the X-titles. In the story, the “intergalactic council,” formed by representatives of all the governments in the known universe, decided that the inhabitants of Earth were too dangerous to be allowed to meddle in non-Earth affairs. A solution was proposed to form an impermeable forcefield around the planet, which would also allow the governments of the universe to use as a prison to house their own intergalactic criminals. Eventually, the truth was revealed that the whole plan was the machination of the Supreme Intelligence, who had indeed survived the attempted assassination by the group of Avengers at the end of 1992’s Operation: Galactic Storm crossover. Additionally, the new species of the “Ruul,” were the genetically advanced Kree that had arisen as a result of the detonation of the Nega-bomb, and the Intelligence’s manipulation of the Forever Crystal, his spoils of war from the Avengers Forever maxiseries. In the end, the council reversed its ruling and Earth was freed.

Around this time, Marvel began experimenting with the idea of having a second Avengers title again. Avengers Forever #1-12 had run for a year essentially as just that, with its own roster separate from the main book. Other limited series starring separate rosters of Avengers would continue with Avengers Infinity #1-4 and Avengers: The Celestial Quest #1-8. Ultimately, however, a true ongoing second Avengers title did not emerge at this time. 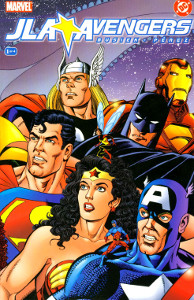 Back in the Avengers title, George Pérez had left as penciler with #34 but Busiek continued as writer. His final story would be an immense storyline running over a year. The “Kang Dynasty” seemed to be Busiek’s ultimate Kang story and ran from #41 in June 2001 to #55 in August 2002. After putting a coda on his run with #56, Kurt Busiek passed the torch. Despite his exit, Busiek found his way back to the team two years later when the opportunity of a lifetime arose. Ever since the 70s, it had been the hopes of George Pérez to draw a crossover between the Avengers and DC Comics’ Justice League of America team. The green light was given in the early 80s and some pages were drawn, but the deal could not be finalized on an editorial level and the unfinished project was scrapped. However, two decades later, Marvel and DC revisited the idea and a deal was reached. Originally, Mark Waid was to write the story but, when this fell through, Busiek got the job. Reunited with Pérez, the two created the 4-issue miniseries JLA/Avengers that was published in late 2003 to critical and financial acclaim.

Back in 1996, with the release of Heroes Reborn, a trend had begun to renumber existing books, allowing Marvel to release new #1s. Long thought a taboo with fans, the sales for the Heroes Reborn books proved otherwise. Additionally, when John Byrne attempted a soft reboot of the Spider-Man books in 1998 with new #1s, fan balked… but they still bought them. However, as the years passed and the renumbered series gained issue count, the purpose of the lower numbers lost their effectiveness. While a new #1 could provide a boost in sales, an issue numbered #40

The Avengers title was not alone in this practice. Both the Fantastic Four and the Amazing Spider-Man books had been using a “shadow” numbering system next to the renumbered sequence. What's more, as these two series reached their respective issue #500 using the old numbering system in late 2003, the newer sequence was abandoned altogether, leaving the series with only the original. Using this same system, Avengers (3rd series) #85 was to effectively be Avengers (1st series) #500 and Marvel intended to do the same thing. However, by this point the Avengers title was not doing as well. It needed more than just a renumbering. It needed reinvention. After Busiek’s departure, writing duties passed first to Geoff Johns, who stayed on the book nearly two years and then to Chuck Austen for less than one. Despite Johns and Austen’s best efforts, though, the book had lost its energy and by the fall of 2004 the Avengers was in a sales and creative quagmire. In desperate need of a revitalization, it was instead disassembled.