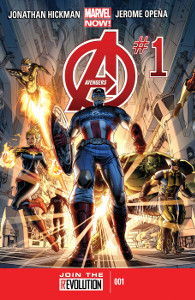 When Bendis departed the Avengers franchise, it was handed over to writer Jonathan Hickman, who right away put his stamp on the series. With a new Avengers #1, now the 5th series to bear that name, Hickman chronicled Tony Stark and Steven Rogers’s joint decision to “get bigger,” expanding the Avengers’ roster. Former New Mutants and X-Men Cannonball and Sunspot joined the team. New characters were also introduced – a brand new Hyperion, a new Captain Universe, a reality-warper named Manifold and, to many readers’ surprise, a mainstream Marvel Universe version of Starbrand and Nightmask. Although the two new characters bore resemblance to the original characters from Marvel’s “New Universe” line from 1986-1989, they had no direct connection. Most curious about the series was Tony Stark’s sense of impending doom. As the series progressed, the Avengers learned of the existence of the Builders, ancient and powerful aliens who seemed to be on their way to Earth. To prepare, Stark began to prepare planetary-scale weapons, though he simultaneously seemed to be preoccupied by other problems he was keeping to himself. 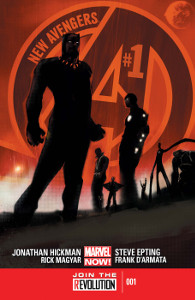 Indeed, Stark had other issues at hand, as seen in Hickman’s second title, New Avengers (3rd series). In the early issues, the Black Panther learned of a trans-dimensional threat to the world, one in which their own Earth would experience an interdimensional “incursion” with another. If the two worlds collided, both universes would be destroyed. If one Earth were destroyed first, however, both universes would continue to exist. Faced with a decision beyond himself, the Panther reformed the Illuminati. Despite his objections to its previous incarnation, Captain America joined the group. However, when he realized that the group was prepared to destroy other Earths to save their own, Cap vowed to stop them, resulting in the group wiping his mind. Stark then convinced Rogers that the Avengers needed to “get bigger,” leading into the events at the beginning of the other Avengers title.

Both of these Avengers titles continued parallel to each other, getting closer and closer in subject matter. The threat of the Builders led to the late 2013 “Infinity” crossover event. The core of the story was a 6-issue miniseries, which intersected with both main Avengers titles as well as the continuing Avengers Assemble and others in the Marvel line. Eventually, Captain America would regain the memories suppressed by the reformed Illuminati and move to stop the group. However, by that time the incursions had reached their end point, leading into the events of the 2015-2016 Secret Wars event. 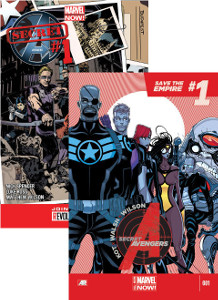 Aside from New Avengers (3rd series), other titles debuted in 2013. The first was Secret Avengers (2nd series), launching in April 2013. Like the original series, this title followed the adventures of a group of clandestine agents, fighting for causes best left out of the public eye. This time, however, the group operated under SHIELD in general and Nick Fury Jr. and Agent Phil Coulson more specifically. During the series’ run, members included Hawkeye, Black Widow, Mockingbird, Iron Patriot, the Hulk and even the Taskmaster. When the series ended with #16 in April 2014, it led directly into Secret Avengers (3rd series) the same month. This series lasted a little over a year, ending with #15 in June 2015.

An unusual Avengers title started in September 2013, spinning off from the Age of Ultron miniseries which had ended a few months before. During the event, Hank Pym had created a computer virus to fight Ultron. However, when Monica Chang, division chief of SHIELD’s artificial intelligence department, informed him that the virus had evolved into an artificial intelligence called Dimitrios, Hank Pym called on several of the Avengers’ robotic allies to help, forming the “Avengers A.I.” team. Among their number were Vision, Victor Mancha of the Runaways, Alexis and a Doombot. The series lasted for twelve issues, ending in June 2014.

Later that year in November, a new Avengers team and title emerged during the Infinity crossover event. When the rest of the Avengers were in space, investigating the threat of the Builders, this left Earth seemingly unprotected and ripe picking for Thanos and his allies. To their surprise, when 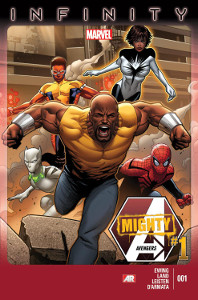 they arrived they found resistance in the form of Luke Cage and his Heroes for Hire. When he had left the New Avengers at the end of that series’ run, Luke had voiced a desire to reform his old Heroes for Hire organization. However, Luke had changed too much during his time with the Avengers and fighting off an alien invasion made the decision easy for him. They were not Heroes for Hire… they were Avengers. The title following this group’s exploits was Mighty Avengers (2nd series), the first issue of which was released in November 2013. An interesting feature of this group was the fact that most of its members were Hispanic or African-Americans. Including Luke Cage, their group included Spectrum (Monica Rambeau, formerly the second Captain Marvel), the third Power Man, White Tiger, Falcon, a new Ronin (actually Blade, the vampire hunter) and the Blue Marvel. Proving it was not exclusively a team for minorities, the team was joined by the “superior” Spider-Man (Doctor Octopus’ mind in the body of Peter Parker) and later She-Hulk.

Emerging from one crossover, in its first year the Mighty Avengers title would participate in two others. One was the Inhumanity crossover, which followed the destruction of the Inhuman city of Attilan and the release of two Terrigen mist clouds, which would begin to circle the globe,

triggering Terrigenesis in latent Inhumans. The second was the Original Sin event. While the Inhumanity mostly occurred in individual crossover issues, the Original Sin crossover was more like events of old, with a core miniseries and affecting other titles in their own books. In the story, it was revealed that the Infinity Formula that had prevented Nick Fury Sr.’s aging since WWII had been running out and that he was now desperate to find a replacement for the secret mission he had been carrying out for decades – the preemptive assassination of extraterrestrial forces that might threaten the Earth. Avengers (5th series) and Mighty Avengers (2nd series) both had crossover issues in the story, and notably Avengers founder Thor was greatly affected. As secrets were at the core of the story, Thor was told a previously unknown truth that so rocked him that he lost his worthiness, which eventually led to Jane Foster taking both the hammer and mantle of the God of Thunder.

Slightly closer to Hickman’s core titles was another spinoff series that started in March 2014 was Avengers World. This series replaced the recently cancelled Avengers Assemble as a tangential book involving the main team. Its first fourteen issues told the story of the entire dozen plus Avengers roster dealing with three major threats simultaneously. The series ran for twenty-one issues, ending in July 2015 right before the Secret Wars event began.

By the end of 2014, the storyline building in Uncanny Avengers (1st series) had reached its culmination, which led into the second major crossover between the Avengers and X-Men franchises. In the Uncanny Avengers series, the Red Skull had parlayed his new telepathy into greater power and had become Red Onslaught. The end of the Uncanny Avengers series with #25 led direction into Avengers & X-Men: AXIS, a 9-issue miniseries that double shipped between December 2014 and February 2015. Throughout the series, a small army of Avengers and X-Men fought against his campaign of “World War Hate.” Unfortunately, though their main plan against Red Onslaught succeeded in 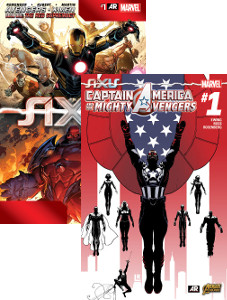 subduing him, in the process they “inverted” the personalities of most present, turning heroes into villains and villains into heroes. In the end, the inversions were reversed (with a few exceptions) and the Red Skull escaped.

Since the first Vision and the Scarlet Witch miniseries, it had been known that Quicksilver and the Scarlet Witch were the children of Magneto. However, events during the Avengers & X-Men: AXIS miniseries drew this fact into question. Shortly after the crossover, both characters joined the rest of the Avengers Unity Squad in Uncanny Avengers (2nd series) on a trip to Counter Earth. Their intention was to find the High Evolutionary and learn the truth. It seems that the series was always intended to be a finite one and it ended with #5 in October 2015.

By the early months of 2015, all of the storylines Jonathan Hickman had been building began to intersect in his two core Avengers titles. In the last nine issues of each series (plus the final five of Avengers World), they featured a banner of “Time Runs Out,” signifying that the heroes of Earth had learned what the Illuminati had been fighting against in secret, as well as the futility of the cause. Realizing that there was no way to win, Reed Richards turned to the only strategy left to him – not to lose. In June 2015, both titles ended, #44 for Avengers (5th series) and #33 for New Avengers (3rd series). The following month, Secret Wars #1 hit the stands.

In the first issue of Secret Wars, the final incursion had begun. As some fans had theorized, the final other Earth that would collide with the main (or “616”) universe was the Earth inhabited by the 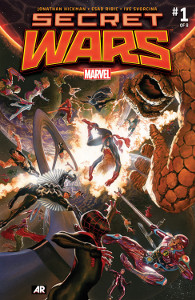 Ultimate Universe (or “1610”) line of books. As both world tried in vain to stop the other Earth, two “life boats” designed by Reed Richards launched, in hopes that they would both survive the final incursion. To the surprise of both vessels’ inhabitants, they landed on a planet called Battleworld, which turned out to have been created by Doctor Doom. Through a complicated series of events, Doom had acquired the near-omnipotent power of the Beyonders, who had been working toward the destruction of the multiverse, and used their power to save a patchwork of sections from over a dozen realities to create his new world, in which he of course was God. While the 9-issue miniseries followed the heroes who found themselves on this world, nearly three dozen miniseries or specials chronicled side stories. In the end, Doom was defeated and the energy he had acquired was used by Reed Richards to restore the universe, which included a merger from aspects of the Ultimate Universe.