With the team reduced to three members (Hawkeye, Wasp & Goliath), the Avengers were looking

for new recruits and soon received one in the form of the Black Panther, who had been recommended by none other than Captain America himself. [Avengers (1st series) #52] This was just in time, as they had to face the second incarnation of the Masters of Evil, led by a mysterious robot named Ultron-5. [Avengers (1st series) #54-55] The mystery of Ultron-5 would deepen with the introduction of the Vision, a synthezoid created by Ultron-5 to be a weapon against the Avengers. Eventually the truth was learned. Ultron-5 was the fifth incarnation of an artificial intelligence created by Hank Pym in the lab and which had grown to hate its creator. Even more amazing, the Vision had been created in turn by Ultron, using the personality template of Wonder Man, who had refused to betray the Avengers so long ago. [Avengers (1st series) #57-58]

No sooner had the Vision been introduced than so was the apparently new character of Yellowjacket. The mystery of the arrogant and near-villainous Yellowjacket played out over two 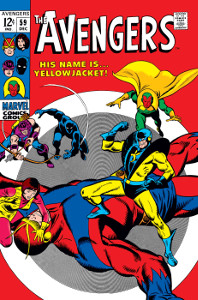 issues [Avengers (1st series) #59-60] during which it seemed that he had killed Goliath. The truth was soon revealed that Yellowjacket was actually Goliath (or rather, Hank Pym), who had suffered a chemically-induced mental breakdown and adopted the new identity of Yellowjacket in his mania. Although this story unambiguously had Pym’s mental issues be the result of outside forces and was clearly intended to have been temporary, this story would inadvertently lay groundwork for other writers to portray Henry Pym as being mentally unstable, capable of committing crimes himself and even contemplating suicide. Years later, when penciler Bob Hall drew Avengers #213, he interpreted writer Jim Shooter’s description that Pym pushed the Wasp more violently than Shooter intended and drew it as a slap. For many fans, this made Pym an irredeemable “wife beater” and writers thereafter did their best to restore his character in the eyes of readers, with limited success. For better or worse, all of those stories are due, at least in part, to this two-issue Yellowjacket tale.

When Pym decided to maintain the identity of Yellowjacket, the Avengers were suddenly without a “giant” on the team. Deciding that his abilities as a gimmick-laden archer were making him a liability, Clint Barton lay down his bow and took up Pym’s growth serum, becoming the new Goliath. [Avengers (1st series) #63] Clint would maintain this identity for a few years, eventually returning to being Hawkeye in #97. Interestingly, Hawkeye would again make this transformation years later during the 1992 maxi-crossover Operation: Galactic Storm. 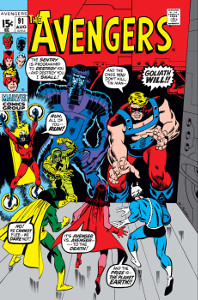 return of the Scarlet Witch allowed Roy Thomas to play with the question of the humanity of the Vision, who clearly seemed to have emotions directed at the Witch. The question of their burgeoning romance came to a head during what would be the Avengers’ most cosmic-storyline yet, known as the Kree-Skrull War. [Avengers (1st series) #89-97] In the story, the Avengers accidentally become involved in the millennia-old conflict between two previously established interstellar empires. To the surprise of all involved, the conflict was ended by longtime Avengers associate Rick Jones, who possessed a previously unknown connection to humanity’s potential for unprecedented power, and with it forced an end to the war. Writer Kurt Busiek would later pick up the plot thread of the “Destiny Force” as a basis for his 1998 maxi-series Avengers Forever. Years after that tale, writer Brian Michael Bendis would use the Avengers’ involvement in the Kree-Skrull War as the reasoning behind his retroactive creation of the Illuminati. 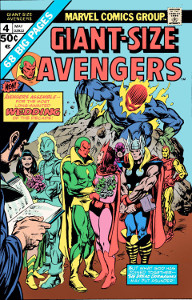 Following Roy Thomas’ departure, writer Steve Englehart took over for the next four years, penning the book from #105 to #152. Well-known stories of his include the so-called Avengers/Defenders War, in which “Earth’s Mightiest Heroes” came into conflict with the self-described “non-team” of heroes. [Avengers (1st series) #115-118] He also created the character of Mantis, whose apparent fate to become “the Celestial Madonna” would be an ongoing plot for two years. This plot would come to a close in Giant-Size Avengers #4, which would also culminate in an important plot Englehart took up from Thomas. While Thomas had introduced the idea of a romance between the Vision and the Scarlet Witch, Englehart brought them together in actual matrimony. The strange relationship between these two unlikely lovers would play out over decades in the Avengers title proper and its spinoff series, including not one but two miniseries depicting the married couple.

Following the departure of the newlyweds on their honeymoon, the Avengers would announce the first of several future “open membership calls,” requesting applications for membership on the team. Of these those responding was the mutant Beast, who had left the X-Men title recently, shortly before Giant-Size X-Men #1 and the introduction of the “All-New, All-Different” team. Although he would always be associated with the outlaw team of mutants, the Beast’s relationship with the Avengers would remain a core aspect of his character. 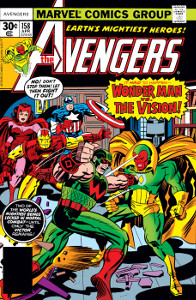 When the Vision had been introduced years before, it had been established that he possessed the “brainwaves” of the fallen hero Wonder Man. Before his departure as writer, Steve Englehart actually brought the hero back. As time passed, the sharing of brainwaves led to the expansion of the Vision’s family, by making Wonder Man his de facto brother. This in turn led to stories exploring their familial relations and all of the ups-and-downs that arise between siblings.

When Gerry Conway wrote his first issue of Avengers with #153 in 1976, he was only the fourth writer in the title’s thirteen-year history. Conway’s run, however, would only run half-dozen issues and the writing chores for next several years would alternate between Jim Shooter and David Michelinie. During their rotating stewardship of the title, readers would follow the apparent death of Thanos, the famed “Korvac Saga,” the introduction of the bureaucratic, thorn-in-the-side Peter Henry Gyrich and the exploration of the mystical and parental history of Quicksilver and the Scarlet Witch. Aside from rotating writers, the roster rotated as much as ever. Old members, such as Captain America, Iron Man and Thor, returned from time to time. New members joined (officially and unofficially), such as Ms. Marvel, Jocasta, Tigra and She-Hulk. Among the artists during this time were some of Marvel’s historical greats – George Pérez & John Byrne. 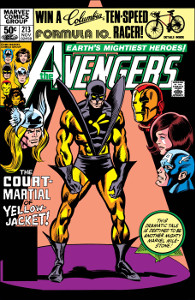 Almost certainly the most controversial story of this time was the “Trial of Yellowjacket.” [Avengers (1st series) #212-214] In this story, writer Jim Shooter picked-up on Henry Pym’s former erratic personality as Yellowjacket during Roy Thomas’ run and replicated it here. Without the excuse of a chemically-induced cause, as was the case years before, Pym grew irrational and bitter on his own, striking a surrendering opponent when her back was turned in order to be the hero of the day. This led the Avengers to conduct their first ever court-martial of a member. In the story, the combination of anger and shame of the trial caused a mental breakdown in Pym, resulting the infamous scene in which Pym backhanded his wife, the Wasp. Expelled from the team, Hank Pym went on a journey of self-redemption that one could argue writers are still attempting to complete decades later.

As noted at the beginning, the title of the Avengers was a series composed of characters that had not only first appeared elsewhere, but had their own ongoing series. By the late sixties, all of the early anthology books had morphed into titles of “book-length” stories starring one character. By the early 1980s, Journey into Mystery had long since turned in “the Mighty Thor.” Ant-Man and Wasp’s series of Tales to Astonish had become the Incredible Hulk (2nd series) with #102. Tales to Suspense had been Iron Man’s series, which he had shared with Captain America for several years. The title had become Captain America’s solo book with #100 in April 1968 and the following month Iron Man had gotten his own series, beginning with a (then) rare #1. 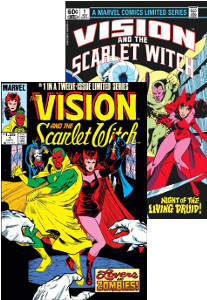 Since keeping track of all of the other titles given to other Avengers would unnecessarily complicate this article, they will only be mentioned when they are relevant to the Avengers title itself. One such series occurred, however, in 1982 when the Vision left the title with his wife to star in the first of their own miniseries – “the Vision and the Scarlet Witch.” At this time in comics’ publication, miniseries were rare, so it must have been a big surprise to readers when just two years later the pair of wedded Avengers received a second miniseries of the same name, this one being an even rarer 12-issue “maxi-series.” A year after the pair’s first miniseries, Hawkeye would get his own 4-issue miniseries, where he married another hero, Mockingbird.