With most crossovers, the end of the event usually provided a sense of closure to the overall story. Conversely, for Secret Invasion, the miniseries’ ending seemed more like a new beginning and the story’s denouement almost a prologue to a new event. In the final issue, it was not Earth’s heroes or Nick Fury and his Secret Warriors who ended the threat of the Skrull queen, it was Norman Osborn, the former costumed criminal known as the Green Goblin.

Osborn’s rise to that moment was due to the Thunderbolts, whose team and series had gone through many changes since they were last led by Hawkeye. With #76 in 2003, the title had gone through a modification found inexplicable to most fans, changing focus from a team of villains searching for redemption to following the exploits of completely new characters who competed in 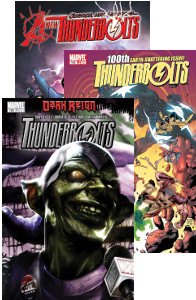 an underground fighting league. The new direction proved unpopular and the series was canceled after six issues with #81. The original group soon found their way back into print, first with a 2004 Avengers/Thunderbolts miniseries, then with their own series named “New Thunderbolts” in January 2005. With their first issue, the prominent #1 hosted a shadow numbering sequence of #82, mirroring the dual numbering system at the time by rebooted titles. This scheme continued until New Thunderbolts #18 (or #99), after which New Thunderbolts was officially changed to Thunderbolts #100. With issue #110 came a new writer, Warren Ellis, who immediately shook things up, steering into the ethically-challenged post-Civil War “Initiative” storyline. Brought under the U.S. government’s direct control, the Thunderbolts were now a government strike force assigned to bring in non-registered super powered individuals. Most of the original team were fired and replaced with truly hardened criminals, eager to be paid to hurt people. The worst of the worst, Norman Osborn was appointed to be their director.

Christos Gage took over as writer with #122, coinciding with the beginning of the Secret Invasion crossover. His last issue was #125, which led directly into Osborn’s appearance at the climax of Secret Invasion #8. The story in that issue did not stop there, though. The rest of Secret Invasion #8 depicted the now popular Osborn being lauded with public accolades and given control of not 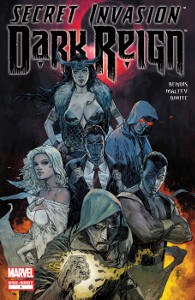 only the Thunderbolts, but SHIELD, the entire Fifty-States Initiative and the Avengers itself. Osborn immediately began transforming SHIELD into HAMMER (the words the acronym abbreviated to be assigned later) and making a deal with his own Cabal of powerful supervillains, from Doctor Doom to Loki, promising to help them attain their goals if they permitted him to take credit for the peace. [Secret Invasion #8, Secret Invasion: Dark Reign]

Without allowing readers to take a breath, the Secret Invasion event had led into another called Dark Reign. Rather than a crossover in a traditional sense with a core miniseries, it was more of a story banner. Nevertheless, the influence was so large that it affected storylines running through a near majority of the titles being published by Marvel, and was supplemented with almost two dozen miniseries or one shots. Ostensibly starting at the end of Secret Invasion #8 in January 2009, the ongoing storyline lasted into early 2010 when it was bookended by another crossover.

One of the central books depicting Osborn’s plans was a new title following Osborn’s creation of his own team of Avengers. Although they did not refer to themselves as such, these new 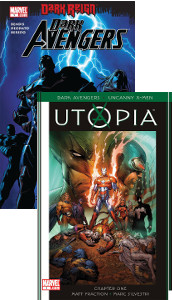 Avengers appeared in a title called Dark Avengers. Eventually, the title of Thunderbolts was changed to Dark Avengers, making this first title Dark Avengers (1st series). Osborn’s Avengers fought among themselves as much as against the targets at whom their director aimed them. One of Osborn’s targets were the X-Men, who at the time were based in San Francisco. Considering them a factor outside his control, something not to be permitted, Osborn took advantage of the chaos around a referendum vote for Proposition X, which sought to limit the right of mutants to reproduce. Seeking to counter the X-Men in the court of public opinion, a tactic that had served him well so far, Osborn formed his own “Dark X-Men” to face against Cyclops’. When half of his team defected to the other side, Osborn brought in his Avengers to finish the job. In the end, Cyclops moved all of the mutants seeking his protection to Utopia, a newly constructed artificial island positioned in San Francisco Bay and protected by all who called themselves X-Men. Realizing he could not beat Cyclops, Osborn instead declared victory and left the X-Men alone. [Utopia Crossover]

During this year in which Norman Osborn ruled unchecked, the old Avengers titles continued. In New Avengers, Luke Cage’s team did their best to thwart Osborn’s schemes, with limited success,

but fared better against one of his associates, the Hood. In Mighty Avengers, writer Dan Slott took over the title from Bendis and took a less dark path with the title. After his ex-wife Janet had apparently died at the end of the Secret Invasion event, Hank Pym adopted a new costume and identity in her honor – the Wasp. Pym’s group of Avengers dealt with international and cosmic crises, as well as Osborn’s ally, Loki. As the only founding member of the Avengers still active, Pym claimed his team were the “true” Avengers instead of Osborn’s, who couldn’t touch them so long as they operated internationally. In Avengers: the Initiative, the recruits learned that the “Fifty-State Initiative” had been replaced by the “Thunderbolts Initiative.” Most were reassigned as Osborn attempted to gain further control. Some, however, deserted and formed the Avengers Resistance, attempting to fight Osborn in any way that they could. [New Avengers (1st series) #48-60, Mighty Avengers (1st series) #21-33, Avengers: the Initiative #20-31]

As 2009 gave way to 2010, it became clear that all of the Dark Reign stories, especially the stories running through the three main Avengers titles, were converging on one place: Asgard. A

little over two years before, writer J. Michael Straczynski had relaunched the Thor title, a series that had not been published since Thor’s apparent death around Avengers Disassembled. In this new book, the city of Asgard had lost its place in the heavens and now existed on Earth, settling specifically in the plains of Oklahoma. Desiring to gain control over these gods as he had attempted with the X-Men, Osborn brought the full force of HAMMER and his Avengers against the Realm Eternal in an all-out attack. Or, rather, “a siege.”

Much like more the crossovers that preceded Dark Reign, the Siege event had a core miniseries, this one lasting only four issues, with its story intersecting in multiple titles and one shots. In the story, the whole affair proved a debacle for Osborn, with the madness he had worked so hard to repress coming to the fore for all the world to see. By the end, Osborn was under arrest and the Avengers, led by a recently resurrected Steve Rogers, were once again Earth’s Mightiest Heroes.