By the summer of 2004, writer Brian Michael Bendis had made a name for himself at Marvel with acclaimed runs on Ultimate Spider-Man from Marvel’s new “Ultimate Universe” line and on Daredevil. When the subject of the Avengers title came up at one of Marvel’s editorial retreat, Editor-in-Chief Joe Quesada was impressed with Bendis’ criticism at what was wrong with the series and his vision for improving it. In particular, Bendis believed that the team should be comprised of Marvel’s top characters. He also felt strongly that the series needed to be rebooted and named “New Avengers” to distinguish its new direction. Shortly after the meeting, Bendis was assigned as writer. However, feeling that he needed a “prologue” to his new direction, Bendis decided sow the seeds of New Avengers in the ashes of the old. 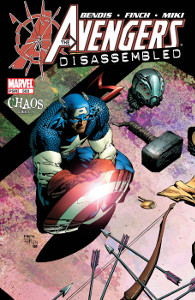 The four issues of Avengers #500 though #503 was a cataclysmic story called “Avengers Disassembled.” In the story, the Avengers found themselves beset by threats from multiple fronts – an alien invasion, an army of Ultrons, fellow Avengers acting in inexplicable, self-destructive ways. As the team attempted to make sense of what was happening, they suffered blow after blow. Scott Lang, the second man to take on the Ant-Man identity, was killed, followed by the death of Hawkeye. The Vision was literally torn apart in She-Hulk’s madness and Avengers Mansion was reduced to rubble. Far too late, the Avengers learned that the force behind their woes was not one of their enemies, but one of their own. In the latest manifestation of her mental instability, the Scarlet Witch had lost control and in her madness did what no force had managed to do before – destroy the Avengers. A final, one shot special was released a month later called Avengers Finale, which gave a final sendoff to the team. Seeing no way to rebuild, the Avengers themselves declared the team disbanded.

Of course, this was not to last. In January 2005, the first issue of New Avengers as released. As this series was subsequently ended a few years later, with a new #1 to follow in a rebooted series, this title of New Avengers retroactively became New Avengers (1st series). Over the course of its f 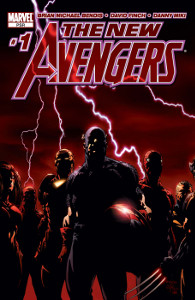 irst six issues, Bendis assembled a new team. Per his promise, he brought in two of the most popular characters in the Marvel Universe – Wolverine and Spider-Man. However, Bendis also drew influence from his personal favorites. Having begun reading comics in the 1970s, he brought in his favorite character from his youth – Luke Cage and the first Spider-Woman. Rounding out the team were veteran Avengers Iron Man and Captain America.

The initial storyline was a sort of mystery, beginning with a prison break and by the end revealing a conspiracy in SHIELD. The seeds of this initial mystery were part of a long range plan by Bendis that would culminate in the 2008 “Secret Invasion” crossover. The next two storylines introduced two new Avengers. The first was the Sentry, a continuity-bending “forgotten” character introduced in a miniseries in 2000 and largely unused since. The second was the ninja-like Ronin, who was originally intended to be a disguised Daredevil but was soon revealed to be a disguised Echo, a female hero with whom Bendis had been familiar during his time on Daredevil. This would not be the last time an established hero would operate under this identity. The Avengers even found a new place to live. No longer were they to call their famous Avengers Mansion home, it was now Stark Tower, a midtown skyscraper thereafter informally known as “Avengers Tower.”

A few months into New Avengers’ run, Marvel tentatively attempted to expand the Avengers franchise with the release of a new title called Young Avengers. In this series, much younger analogues to long established characters were introduced. During the first six issues, readers were introduced to Patriot, Speed and Asgardian, Hulkling, Stature, Iron Lad and a new, female Hawkeye. All new characters, writer Allan Heinberg nevertheless ensured that each character’s backstory was steeped in the history of the Avengers. Patriot was the grandson of Isaiah Bradley, twins Speed and Asgardian seemed to be a new Quicksilver and Scarlet Witch and were heavily hinted to be the latter’s children. Hulkling was a hybrid Kree-Skrull and son of Captain Mar-Vell. Stature was the daughter of Scott Lang and who now adopted the growing aspect of the Pym Particle to become a giant. Most fascinatingly, Iron Lad was revealed to be a young Kang.

The stories running through these first twelve issues seemed to have been stories of self-discovery as much as super-heroics. Reflecting the changing times, it was revealed that two of the members, Asgardian and Hulkling, were not only both gay but a couple. At the time, Marvel and DC were still finding their way in introducing LGBT stories in their comics and had proceeded cautiously in the thirteen years since Alpha Flight’s Northstar had openly declared himself to be homosexual.

At the end of the Avengers Disassembled story, the Scarlet Witch had been carried away by her father Magneto, who was currently a co-star in Excalibur (3rd series), which depicted Xavier’s attempts to rebuild the wasteland that was Genosha. Fascinated by what would happen next,

Bendis proposed an event that would not only address the question but bring the Avengers and X-Men together in one massive story. The core of the crossover was an 8-issue miniseries titled “House of M,” which ran bi-weekly from August to December 2005. In the story, a few words whispered in her ear by her brother caused the Scarlet Witch to reshape reality. The new world born from her work was one in which mutants were the majority and humans the minority, and the entire world was a utopia ruled by the dynasty founded by her father, Magnus. The crossover touched many of Marvel’s titles, some only with a single issue and in others as part of major storylines. The conclusion of the series also allowed Marvel to correct what some had felt was a mistake from Grant Morrison’s run on New X-Men (1st series) in which mutants now numbered in the millions. In the aftermath, the Witch’s reversion of reality included the reduction of mutants into the hundreds. The “Decimation” as it came to be known, would affect the X-Titles for years. The reversion also had one other not so minor change – fan favorite Hawkeye was again among the living.

If nothing else, the sales and acclaim behind the House of M crossover demonstrated to Marvel that summer events still had big potential. So it was that the summer of 2006 brought the biggest event in the Marvel Universe in years and the probably the most controversial Marvel story before or since. When Mark Millar’s Civil War #1 hit the stands, it brought forth a philosophical question regarding the Superhuman Registration Act, which resulted in a schism not only between the main 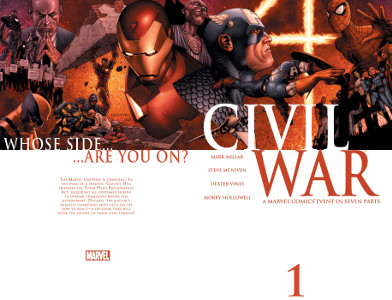 proponents of each side, Captain America and Iron Man, but between fans who debated which character was right. Gone were the fan arguments about who could beat whom in a fight; now the fans debated whether Iron Man was a fascist or Captain America a criminal.

While the core 7-issue Civil War miniseries followed the main body of the story, all of the titles featuring an Avenger character were affected. Less than two years into its run, the New Avengers found themselves “disassembled” and those that remained on the Anti-Registration Act side became rogue heroes on the run. The Young Avengers also found themselves in the anti-camp as well. Their series had come to a conclusion with #12 and was replaced with a 4-issue miniseries shared with another group of young adventurers called the Runaways. [Civil War: Young Avengers & Runaways] Although holdouts would remain, the pro-Registration side effectively won in the end when Captain America surrendered. As shocking as this ending was, it was topped a few weeks later with the release of Captain America (5th series) #25 in which Steve Rogers was assassinated. The story even gained attention in the national news, a rare event at the time for comics. Although Rogers eventually rejoined the living, the Avengers would reel from his loss for years.

For the heroes that had been in the pro-Registration camp, the Avengers continued and did so with official, government recognition. To chronicle their adventures, Bendis expanded the Avengers franchise with a new title named Mighty Avengers in May 2007, while the unregistered Avengers continued appearing in New Avengers. Since this was the first title to bear this name, it is referred to as Mighty Avengers (1st series). This series followed Iron Man’s team, based in Avengers Tower and led by Ms. Marvel.

Another post-Civil War spinoff was Avengers: the Initiative. During the crossover, Stark and Mr. Fantastic had spoken of the “Fifty-State Initiative,” a plan in which SHIELD would coordinate registered heroes into fifty teams, each assigned to a particular U.S. state. This new series focused mostly on new characters who were recruits for these eventual teams and followed their training at a “boot camp.” The first twelve issues were co-plotted by Dan Slott and Christos Gage, after which Gage took over the rest of the series. During its 35-issue run, the recruits (and later graduates) participated in major crossovers.

As these two new titles found their own niche in 2007, Bendis peppered the rest of the year with a non-monthly miniseries named New Avengers: Illuminati. The concept of the Illuminati, a secret league of heroes taking it upon themselves to make decisions for the whole Earth, had been introduced by Bendis a year earlier as a prologue to the Civil War event. Bendis now expanded upon this concept, showing that the impetus for this group’s creation lay in the Kree-Skrull War storyline that had run through the first Avengers book so long ago. [Avengers (1st series) #89-97] Fans drew a quick connection to this story when the Skrulls suddenly appeared in Bendis’ New Avengers title, where the team discovered that the shape-changing aliens had begun replacing key figures in important positions. Unfortunately for them, the Avengers were too late. A “secret invasion” had begun.

The Secret Invasion miniseries ran eight issues, beginning in June 2008 and running through January 2009. Much like Avengers Disassembled, the Avengers struggled to understand what was happening. Could they trust each other? Could one of them secretly be a Skrull working

against the team? Much like Civil War, the miniseries caused debate among fans who wondered the same thing. The entire story seemed to take place over a very short period of time, not allowing the characters to catch their breath. Likewise, it dominated the stories in all three Avengers titles – New Avengers, Mighty Avengers and Avengers: the Initiative. Over a dozen ongoing titles participated in the event, with no fewer than a dozen Secret Invasion miniseries providing side-stories. The event also answered the question of where Nick Fury had been since the end of the Bendis’ 2004-2005 Secret War spy-thriller genre miniseries. Interesting, among the cast of the team appearing in that series were Cap, Spider-Man, Cage, Wolverine and Daredevil – a prototype for his roster on New Avengers. The story of Fury’s building of a squad loyal only to him would lead to the spinoff series Secret Warriors.