With the creation of the Wasp, all of the pieces of the original team were in place. Three months later, in September 1963, Avengers #1 hit the stands, replete with “Earth’s Mightiest Heroes” plastered below the title logo. The in-story impetus for the team’s formation drew from many of 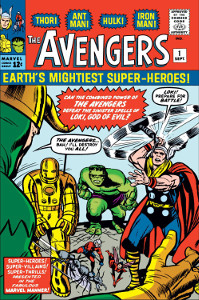 young Marvel’s already established stories and continuity. Loki, Thor’s stepbrother and main nemesis, sought to cause trouble for the thunder god and framed the Hulk for wanton destruction. Having been considered a menace more than a hero in his own series, this was easy for the public to believe. Rick Jones, a member of the Hulk’s supporting cast, sought to clear the Hulk’s name and made a call for help, a call which was heard by Thor, Iron Man and the team of Ant-Man and the Wasp. A standard Marvel battle between heroes ensued when the respective heroes located the Hulk. However, it was Thor who ended the hostilities by providing proof that the one behind it all was Loki. It was only in the last four panels of a “book-length” adventure that the team was proposed, when Ant-Man and the Wasp spoke up, proposing they pool their resources. Evoking her spirit from her first adventure, the Wasp’s first suggestion was “the Avengers,” a name immediately accepted by the other four, giving birth not only to a team but a franchise.

At this point in Marvel’s history, the publisher was limited to a certain number of titles that could be released each month. A way around this rule limiting their titles was to have most of their books be released bimonthly. In these early days at Marvel, it seemed that Jack Kirby penciled nearly everything. Though he was known as an incredible artist with prodigious output, it was only because of the bimonthly publication that Kirby was able to work on so many titles. It also meant that more stories were published in each of the heroes’ respective titles and whatever was going on in those books would be reflected in the Avengers.

Two months after its first issue, Avengers #2 hit the stands and the team was already different. Back in his own book. Henry Pym had given up the identity of Ant-Man for a new one – Giant-Man. What’s more, the roster which had been established with the first issue was changed by the end of the second. When the shape changing Space Phantom assumed the identity and powers of each Avenger in turn, the Hulk came to realize that he did not command the trust of his teammates and leapt away in the issue’s final panel. This change in the team would be a hallmark of the title, allowing Stan Lee and all subsequent writers to reinvent the book by having characters come and go. 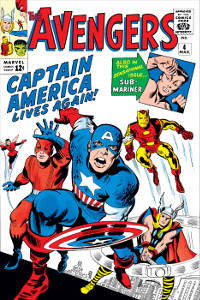 Arguably, the biggest change came with the addition of the new title came with #4 and the introduction (or rather reintroduction) of Captain America into the Marvel Universe. Originally appearing in 1941 with Captain America Comics #1, the character had enjoyed great popularity during World War II but fell into obscurity shortly after the war ended. Lee and Kirby came up with a masterful, in-story explanation for why a character not seen for years could now appear in the “modern day” and be not a day older. After their first adventure with him, the Avengers invited the revived Cap to join their team. Although he has not been on the team continuously since, Captain America has been an Avenger as often than not since his revival. For years, fans considered Cap an “honorary founder” of the team, an opinion given in-story validity when it was explained that Cap’s military credentials were what allowed the team to gain security clearance. [Avengers (3rd series) #4, Avengers: Earth's Mightiest Heroes #1-8]

The early days of the Avengers title brought villains and concepts that would be around for decades. The first was the Masters of Evil, a group of villains formed from the criminal counterparts to each member of the Avengers. This original team was the brainchild of Baron

Zemo, a character created to be a retroactive foil from Captain America’s WWII days. When his original roster proved unable to stop the Avengers, Zemo immediately reinvented the team, recruiting Asgardian malcontents the Enchantress and the Executioner. In this way, much like the Avengers, the Masters of Evil were established as a team that would reinvent itself over the decades that followed. The most significant of these early attempts to destroy the Avengers was in #9, when Zemo recruited industrialist Simon Williams, transforming him into Wonder Man. Blackmailed into serving Zemo, Wonder Man infiltrated the Avengers, intending to lead them into a trap set by the Masters. At the last minute, Wonder Man’s conscience got the better of him and he betrayed the Masters of Evil, saving the lives of the Avengers at the cost of his own life. Though dead and buried, Wonder Man would not be forgotten by writers.

Avengers #8 and #10 are very similar in that they introduced two perennial Avengers villains, each of whom were time travelers. Avengers #8 brought “Kang the Conqueror,” who claimed to be a 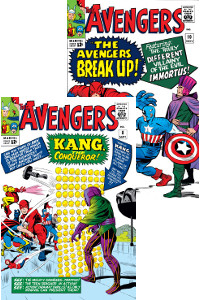 future version of the Fantastic Four villain Rama-Tut. In the years since adopting his new identity, Kang had conquered the future Earth and built a giant empire. However, bored with the ease of his success, Kang had traveled back to the present to conquer the world there, beginning first with the Avengers. Unfortunately for him, Kang found the Avengers more than a match. Appearing two issues later with #10 was Immortus, who claimed to be the master of time and ruler of the mystic realm of Limbo, where things never changed. He too sought to destroy the Avengers and teamed up with the Masters of Evil to accomplish this, only to find defeat. In the years that followed, Kang and Immortus would return as foils to the Avengers. Subsequent writers would also pick up on the story point of Rama-Tut becoming Kang by revealing that Immortus himself was in turn a future version of Kang, one with far more complex motivations than simply conquering.

Well into its second year, the Avengers title was a definite success and had even transitioned to being a monthly title almost a year before with #5. Featuring some of Marvel’s most popular characters, the Avengers could have continued as it had for years. However, with issue #16, Lee and Kirby did the unthinkable: they changed the whole thing. In the story, all of the remaining founding members (Iron Man, Thor, Giant-Man, Wasp) had either already left as a result of ongoing stories in their own titles, or were thinking about leaving the group now. Rather than 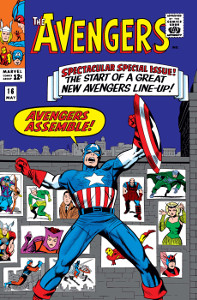 disbanding the team, however, the founders decided to allow the Avengers to continue, but with new members. This first example of roster change would repeat dozens of times in the intervening decades, allowing writers to reinvent the title’s team and bring fresh stories and characters for their readers.

The new recruits were Hawkeye, Quicksilver and the Scarlet Witch, all of whom would operate under the leadership of Captain America, the only current Avenger staying. In choosing these characters, each of whom had been reluctant villains in other books, Lee and Kirby would establish another new precedent of a redeemed criminal being given a second chance at being a hero. Of the three, Hawkeye and the Scarlet Witch would be almost continuously associated with the team and any of its titles. In fact, Hawkeye would go on to be a team leader of its later west coast branch. Conflict abounded in their initial stories, with both the arrogant Hawkeye and quick-tempered Quicksilver thinking that they should be leader, rather than the “old warhorse” Cap. Still, the foursome bonded in the year that followed, along the way earning the silly nickname of “Cap’s Kooky Quartet.” The Quartet eventually became a sextet in #28 with the return of the Wasp and Hank Pym, the latter of whom had adopted a third identity of Goliath. The ranks of the team grew again with #38, introducing Hercules, the Greek demigod and “Prince of Power,” another perennial member of the Avengers, who officially joined a few issues later.

It’s important to note that this period saw another changing of the guard for the Avengers title. Since its first issue, the credit of writing had gone to Stan Lee, with whom those early issues had no doubt been co-plotted by Jack Kirby. With Kirby’s departure with #16 of the series, the only writer of the Avengers had been Stan Lee. This changed with #36, which saw the introduction of young writer Roy Thomas. Thomas would write the series for the next six years with an unbroken run from #36 to #104. While the Lee and Kirby run had introduced many concepts that would stay with the Avengers forever, future writers would draw far more heavily on concepts and stories introduced during Roy Thomas’ tenure.