Gone over the edge, Pietro helped Gyrich and the Commission frame the Avengers for various crimes by giving false testimony and twisting events against the group. The Avengers were imprisoned in the Vault, but escaped and cleared their names after battling Quicksilver's allies, the android Zodiac. Pietro only backed down when Vision confronted him with images of Thomas and William, and defied Pietro to declare them worthy of his wrath as well. [West Coast Avengers Annual #1]

Eventually, Wanda and Vision received a fake note from Bova, asking for their assistance in some serious issue. Upon arriving in Eastern Europe, the couple were struck with special weapons to counter their abilities and found themselves arrested, just like the West Coast Avengers, who

were there investigating some other matter. It turned out that Quicksilver was once more behind the attacks. He was now so insane that he believed his sister and his former allies had betrayed him, and had also given in to his old hatred towards the Vision as an artificial being. Pietro even went as far as readopting Magneto’s views of genetic superiority. He had allied himself with some Communist agents from the East Block and the heroes had to overcome several super-powered opponents like the Voice and Dr. Doom to get to him and defeat him. [West Coast Avengers (2nd series) #33-34]

Returning to the States, the Scarlet Witch and the Vision were witness to the near disbanding of the West Coast team over disagreements between team leader, Hawkeye, and his wife, Mockingbird. With all but Hawkeye and Wonder Man leaving due to personal reasons, the couple felt obligated to help keep this branch of the Avengers alive and moved with their infant sons to the Avengers Compound in California. The sudden appearance of Mantis made Wanda worry that she might go after her husband once more, but the Celestial Madonna was too caught up in her own business for that and quickly left again. [West Coast Avengers (2nd series) #37-40]

The first weeks back with the team seemed to be business as usual, but one morning Wanda woke to find her husband gone. The governments of the world had always been leery of Vision following his short-lived takeover of the planet's nuclear weaponry but, as long as he was inactive with the Avengers and didn't have access to their advanced computer system and network, they 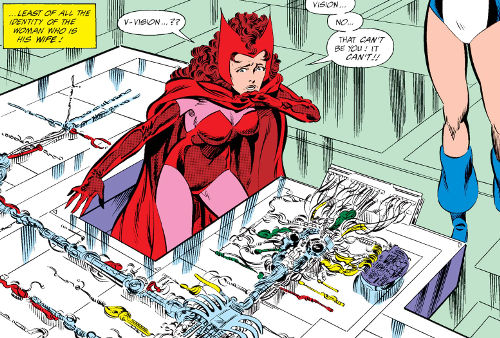 were content to let him be. His return to active duty prompted action from a specialized, international task force, designed to neutralize the potential threat Vision held. After they tricked the disgruntled Mockingbird into concocting a tactical scenario for capturing the synthezoid, this task force kidnapped the Vision in the middle of the night and took him to a secure base. Regretting her action, Mockingbird helped the West Coast team to get back their missing member. However, by the time they got to the base, his body had been dissected and his memory wiped clean. Moreover, the scientists had also implanted a virus in the Avengers computer system that erased all data pertaining to the Vision, and through their cyberlink to S.H.I.E.L.D., the Fantastic Four, and every other database on-line. 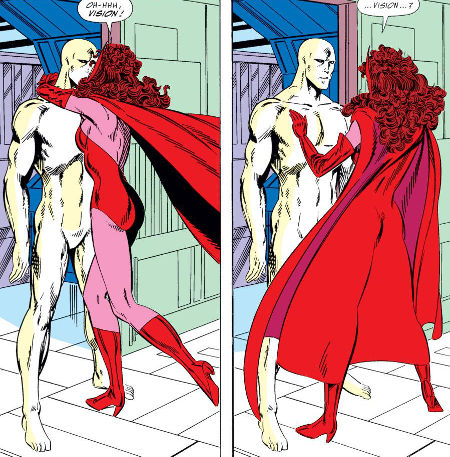 The West Coast Avengers managed to retrieve Vision's body and, in a testament to his skill, Hank Pym was able to rebuild the synthezoid, virtually from scratch, and reprogram his history from memory. Without Wonder Man's brain wave patterns to act as a blueprint, however, Vision was an emotionless machine - he felt nothing empathically and could only recall his memories, though not feel any emotional attachment to them. This included his feelings for Wanda, which crushed her, but Wonder Man's refusal to let his mind be copied again perhaps hurt even more. It seemed that Simon was never comfortable sharing his mind with another person and, as he had serious feelings for Wanda himself, he was not willing to have his brain waves copied another time. In her righteous fury, Wanda slapped Wonder Man and then hexed the California cliffside, toppling half a mountain on her former friend. It's questionable which act hurt the selfish Simon more. [West Coast Avengers (2nd series) #42-45] 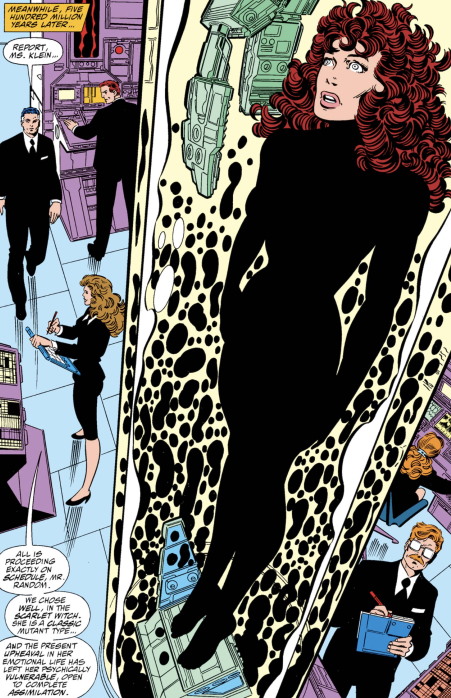 Feeling that her husband was dead to her and two of her closest friends (Simon and Bobbi) had betrayed her, Wanda was in a rather vulnerable state. As Hank Pym had done all he could to restore her husband, she accepted an offer from the Saunders College in Texas to help improve the synthezoid’s condition. However, their real interest was in Wanda, as the Witch learned soon after arriving at the place. She was locked in a single, bare room and, before she could even try to escape, a black, symbiotic organism engulfed her body. This organism was a collective seed from Earth‘s very beginning that had lain dormant within several specimen of Earth’s dominant lifeform. Referring to itself as “That Which Endures,“ the seed would reevaluate which qualified as the dominant lifeform every few millennia, and now they chose mutantkind with the Scarlet Witch being their first new host. It took the combined efforts of two Avengers teams to free Wanda from the possession. [Avengers West Coast #47-49]

Constantly being disappointed by the people around her, Wanda continued to withdraw from her fellow Avengers. She was about to give in to the same hatred towards humanity, like her brother, making several statements about mutant superiority. [Avengers West Coast #50] Things only got worse as her children turned out to be unliving constructs that only existed when Wanda thought about them, whereas they vanished when she was too distracted during a battle or even knocked out. Although the boys’ various nannies had told the Witch about these 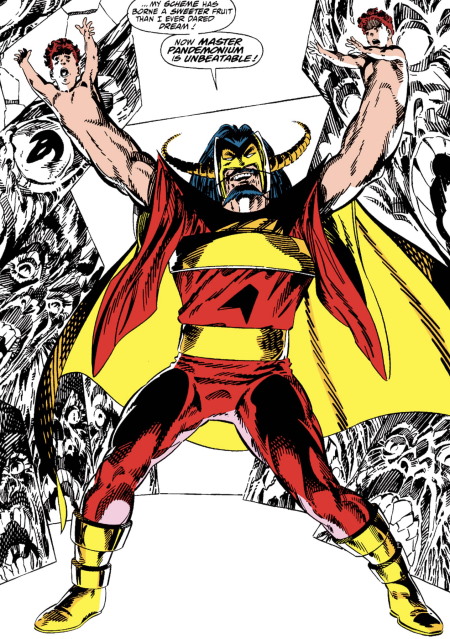 disappearances, she was in denial and on the verge of a nervous break-down. Wanda’s mentor and friend, Agatha Harkness, miraculously resurrected around this time, and arrived upon sensing Wanda's distress. However before the old witch could shed any light on the boys‘ status, a horde of demons attacked and Master Pandemonium absorbed Thomas and William into himself. It turned out that Wanda did not create life when she instigated her pregnancy, she only stole it - specifically two wandering shards of the demon lord Mephisto's soul, which had been shattered and scattered months earlier. That revelation made, Mephisto himself appeared and reclaimed what belonged to him. The only way to drive him away was for Agatha Harkness to erase knowledge of the twins‘ existence from Wanda’s mind, thus affecting the parts of Mephisto that were still linked to her. [Avengers West Coast #51-52]

[Note: Agatha's explanation was that Wanda had a pseudocyesis episode, a medical condition of "false pregnancy" where a woman experiences a powerful delusion and their mind tricks their body into showing secondary indicators and symptoms of a true pregnancy. The Salem magic took the delusion a step further by attracting Mephisto's soul shards to act as fixed points for Tommy and Billy's "existence". Years later, Vision (3rd series) #7 tragically showed Vision was fully aware his children weren't "real", and tried to reason with Wanda in private even while putting on a jovial act in public. After his deconstruction, Vision no longer saw the need to humor Wanda's delusions.]

Not long after, Wanda was kidnapped by worshippers of Set and mesmerized into being one of his Seven Brides to aid in the Elder God's resurrection. She and the other women were freed, but the experience took its toll. The constant manipulations and setbacks in her life were too much for the Scarlet Witch to bear. She fell into a catatonic state, completely dead to the world around her.  Worried about the 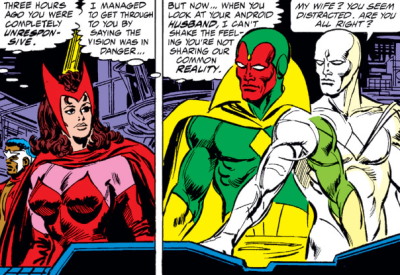 woman he secretly loved, Wonder Man even volunteered for his brainwaves to be used on the Vision again but, surprisingly, the synthezoid refused this gift. With cold logic, he explained that he would still not be the same man from before. Her teammates only temporarily managed to snap Wanda out of her trance by saying that the Vision was in danger. The Scarlet Witch came around, though her perception of reality was somewhat off as she kept hallucinating of the Vision still being his former self and in love with her. When the synthezoid decided to leave her, joining the somewhat understaffed East Coast branch of the Avengers, Wanda again went catatonic. [Atlantis Attacks, Acts of Vengeance events]

Her father, Magneto, kidnapped her in this condition and she came out of her catatonia with an overwhelming loathing of humanity, and especially her former teammates. This "Dark Scarlet Witch" demonstrated dramatically greater power levels and tortured a number of her friends, later facing them in outright combat. Wanda even deactivated the original Human Torch with malevolent glee, temporarily sending him back into the inert state the Avengers had found him in. Father and daughter were joined by Quicksilver, whom Magneto had asked to join them in their family reunion, and the three mutants departed to Asteroid M to restart the Brotherhood of Evil Mutants. The remaining Avengers followed them but were hopelessly outmatched and sent back to Earth. [Avengers West Coast #55-57] 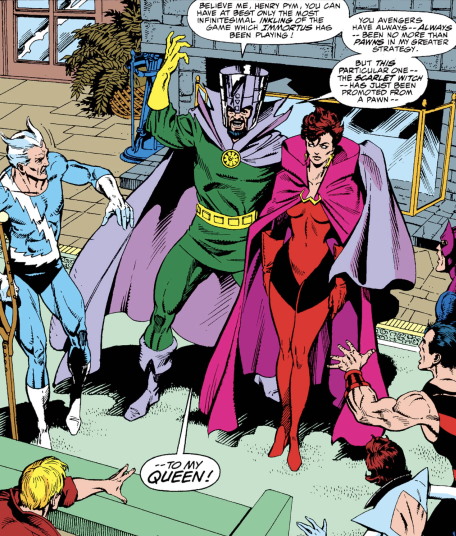 Quicksilver, however, had recovered from his own madness some time ago. He only faked an agreement with Magneto’s views to get his sister away from him. Quicksilver betrayed the redeveloping Brotherhood to the Avengers West Coast and, in this second battle, the heroes won, partially due to Wanda spacing out again in the middle of the fight. This time, it was even worse than before, as not only was she catatonic but she was out of sync with the temporal flow of reality. Immortus then stepped in and revealed that almost everything that happened to Wanda up to this point was by his design: the Vision's deconstruction, the arrival and loss of her twins and her augmented powers. The Scarlet Witch was the nexus being of her reality, a fact that made her unique in all the multiverse and specially suited for Immortus' needs. By funneling temporal energy from various alternate realities through her, Immortus could use Wanda as a power source to help him throw off the Time Keepers' hold on him. His plans backfired when, first, the Avengers West Coast followed him and Wanda to Limbo, then the Time Keepers showed up themselves and, with help from Agatha Harkness, Wanda awoke, casting away all the extra power Immortus had built up inside of her. The Keepers took all this power and forced it into Immortus himself, casting him into the fate he had reserved for Scarlet Witch. [Avengers West Coast #60-62]