Upon their return, a series of attacks on Avengers around the globe led to a mass meeting of the entire roster. However, the attacks were only a trick by Morgan le Fey to get her hands on the Scarlet Witch, whose chaos-spawned energies enabled her to manipulate the magic of the Twilight Sword and rearrange reality itself into a world more to her liking. All the Avengers, except Wanda, were reconstructed into the Queen's Vengeance, devoted soldiers in Morgan's army. 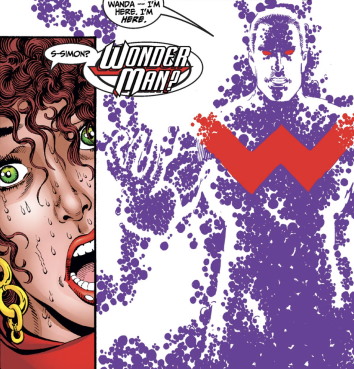 Wanda was kept prisoner in the dungeons of Morgan's castle, but she managed to send out a series of hex-boosted cries for help: "Avengers Assemble." As a result, those Avengers with the strongest devotion to the group and its concepts began to snap out of Morgan's spell. As an added bonus, Wonder Man was inexplicably brought back to life by the same hex. A being of pure energy, Wonder Man could never be truly destroyed to begin with and Wanda's "summons" provided enough force for his mind to reassert itself and bring the scattered bits of his consciousness and energy form back together. He was not fully alive yet, however, and tended to act like a genie in a bottle, manifesting only when Wanda called for him and disappearing when she didn't need him anymore...a somewhat unsettling state for them both. [Avengers (3rd series) #1-3]

After Morgan was defeated and reality set right, the Scarlet Witch elected to join the re-assembled roster full time, partly to explore her disturbing hold over Simon and partly because Vision had been massively damaged in the final battle against Morgan and was recuperating in the mansion's basement. Wanda was unsure about her feelings for her estranged husband,

but the Vision’s statements that their wedding vows had been “till death do us part” and him being dissected qualifying as some sort of death made it look like he thought their relationship didn’t really have a future. [Avengers (3rd series) #4]

Wanda was not comfortable with conjuring up Wonder Man every time when there was a crisis; she felt it was like abusing him. Soon enough, though, Simon also appeared without her consciously calling out for him. For example, in a moment when she felt lonely and depressed, he materialized to give her some moral support. To better understand their strange link, Wanda visited her mentor, Agatha Harkness, who then explained the full nature of Wanda's powers to her for the first time. According to Agatha, Wanda would have become an energy-wielding mutant like her father, but Chthon’s intervention during her birth had set this energy to be wielded as his own “chaos magics." These energies were responsible for altering probabilities by creating chaos and 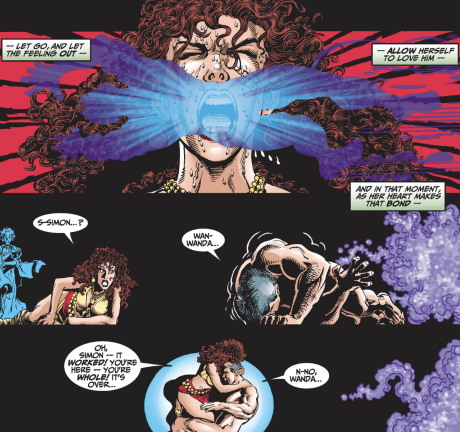 were especially effective on organic objects. Nature magic was a form of chaos magic, after all. Agatha explained that she always knew Wanda was capable of wielding true magic, and acted as her mentor train her in the use of her "mutant hex power" until the time when Wanda was prepared to hear the truth. Armed with this knowledge, Wanda cast a ritual during which she had to express and accept all her love for Wonder Man, which provided the required anchor to fully restore his physical form. [Avengers (3rd series) #10-11]

Just as she and Simon started dating, the Vision’s repairs were complete. He congratulated the Witch on her new relationship; however his responses made her suspicious, and Wanda pressed the Vision on his feelings. He ultimate confessed that he had fully regained not only the capacity for emotion, but the connections to his life before his disassembly. Vision fully remembered and felt their time together, but felt guilt over having "abandoned" Wanda and caused her so much pain. Despite all these troubles, Wanda even took on a leading position, though only as deputy under Captain America. Several inefficiencies in the team’s performance caused her to address 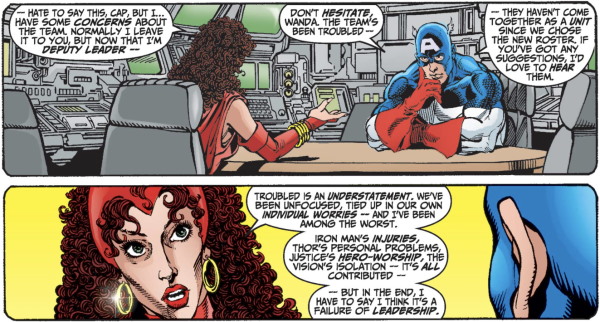 Cap about some flaws in his leadership and they soon agreed on him doing the field leading and organizing, and her becoming a morale officer, trying to integrate newer Avengers and working out training schedules to improve the teamwork of members unfamiliar with each other’s powers. [Avengers (3rd series) #12-13, 15] 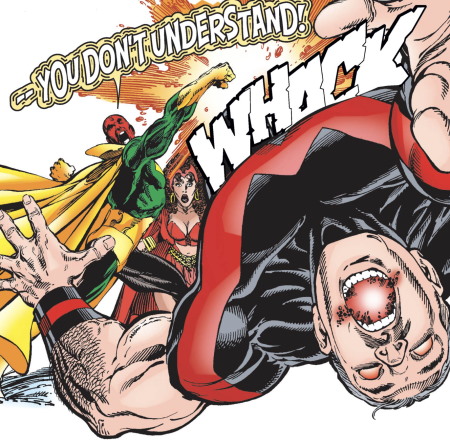 Though the Scarlet Witch and Wonder Man were happy together, during a battle with Ultron, the Vision openly expressed in front of his teammates that he still loved Wanda. He had only rejected her as he knew that all of his actions and likings were based on those of Wonder Man and, as such, he felt he had no right to intervene in Wanda’s relationship with “the real deal.“ At the same time, though, he could no longer stand to be near them and constantly witness their feelings for each other, which is why he took an extended leave of absence. [Avengers (3rd series) #22-23]

Due to some framed charges by the Triune Understanding, the Avengers had to change their roster once more. Some had to leave because of personal shortcomings, others because of the Triune's manipulations. Wanda was among the few who remained and, though offered to lead the team, she declined and remained deputy, now under the Wasp. Her reason was that her unsorted relationship with Wonder Man and the Vision was too problematic for her to fully take charge. [Avengers (3rd series) #27] 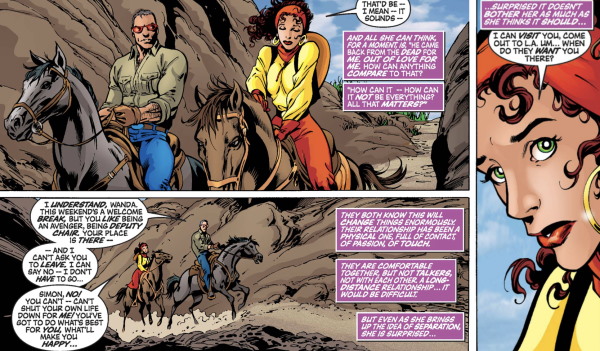 Indeed, in the upcoming months, fate seemed to want to separate Simon and Wanda. While she was rather comfortable with being an Avenger, Simon had no intentions of being a full-time super hero and, instead, opened a charity foundation called "Second Chances" in Los Angeles for people who, like him, had failed in life in the past and needed help in getting on their feet again. When the couple discussed the matter, fully aware that their relationship would not survive the long distance, as it was mostly a physical one, built on passion and touch, they decided to part as friends. Wanda was surprised that the end did not bother her as much as she thought it should. [Avengers (3rd series) #41]

The rise of the Kang Dynasty war that followed left little room for love in Wanda's life. In fact, she had to quietly stand on the sidelines when Mantis returned and had a brief affair with the now-unattached Vision. Wanda was polite and mature enough to give her blessings and not interfere, although she did privately force Thor to spar vigorously with her so she could vent the lingering jealousy she felt about Vision. [Avengers: The Celestial Quest #1-8] Scarlet Witch acted as one of many field leaders during the Avengers counter-offensives, and was reunited with Simon briefly in one of Kang's camps before he was fully overthrown and the world order restored. [Avengers (3rd series) #42-55] 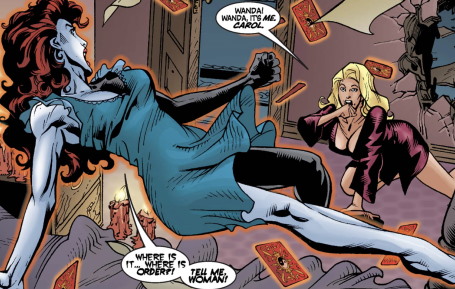 Wanda’s “chaos magic” related powers also made her attuned to one of the universe’s cosmic entities - the In-Betweener. When other forces had split this being into two halves, it was through Wanda that Chaos could reach out and search for his missing “brother,” Order. After he had been found, Wanda could reunite the two halves and restore the In-betweener to his regular state. [Avengers (3rd series) #57-60]