The two left New York and bought a house in the suburbs of Leonia, New Jersey, which caused a commotion with the people living there, who either hated mutants or saw the marriage of a human and a "machine" as an affront to God. Still, Wanda and Vision liked it there and did not care what others thought of their relationship. A friendly face showing up was Robert Frank, the Whizzer, who still believed himself to be Wanda’s father, as she had never found it within 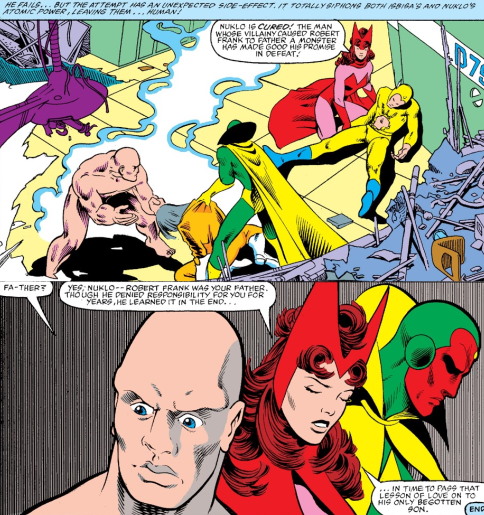 herself to tell him the truth and take away the family that remained to him. The Whizzer asked Wanda for help in getting legal custody of Nuklo, wanting him to get out of governmental institutions. Suggesting that they take him to the Inhumans‘ scientist on the moon, Wanda agreed to help, not knowing what was in store for them. One of the scientists taking care of Nuklo was actually Isbisa, an old villain of the Whizzer's, who had slowly been leeching off his radioactive energies for himself to get revenge. When the heroes came to pick up Nuklo, Isbisa fought them to a standstill. In the heat of the moment, the Vision revealed to the Whizzer that Wanda was not his daughter, right before he was killed by the villain. His death, at least, served a purpose, as it inspired him to take some responsibility and enter the fight; strangely, he and Isbisa canceled out each other’s energies. [Vision & Scarlet Witch (1st series) #1-2]

With one father figure having left her life, another was about to enter. When Wanda and her husband were visiting Quicksilver and Crystal on the moon, they were suddenly approached by Magneto. The siblings feared he wanted reclaim them for his Brotherhood and immediately attacked. The fighting only stopped when Crystal yelled out, fearing for the safety of her 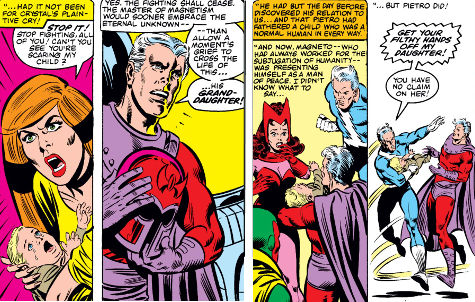 daughter, Luna. It was then that Magneto revealed what he had learned earlier that day – having tracked down Bova, he had discovered that the mother of the mutant twins was Magda, his own wife, making him the grandfather of little Luna. Crystal allowed him to hold the girl in his arms, but the peaceful moment was not to last. Quicksilver wrested his daughter from his arms and told Magneto that he could not forget the way he had treated them before, and any genetic relationship would not change that. Wanda fully agreed with her brother. [Vision & Scarlet Witch (1st series) #4, Avengers (1st series) #234]

In the following months, Vision and Wanda helped out the Defenders two times, though they had no intention of joining, and more than once had to say no to the Beast, who, in an attempt to get over the group’s non-team status, eagerly offered them membership. [Defenders (1st series) #124]

Shortly afterwards, the couple was called into Avengers service as emergency reservists to deal with an outbreak of the Negative Zone in Manhattan. When the Vision tried to pierce the Negative 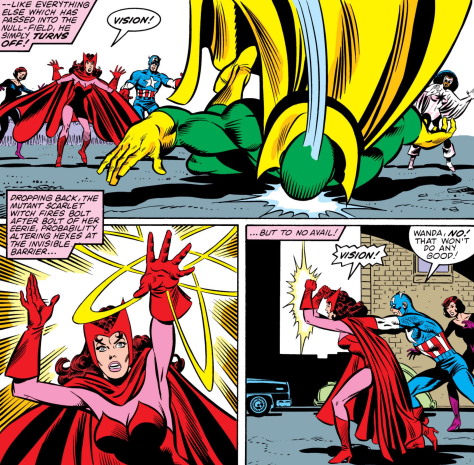 barrier intangibly, his entire system shut down and he collapsed inside the field. Wanda was devastated to see him cut off from her and anyone else who could possibly help. Finally, when the field was deactivated from within, the synthezoid could be examined and was taken to Avengers Mansion where, placed in a stasis tube, his systems could reboot and repair. Much to the concern of the Avengers, Wanda would not leave his lifeless form for hours, until they managed to get the Witch distracted by making her rejoin the active roster for the time her husband was recuperating. In She-Hulk and Captain Marvel, the Avengers had some new members that Wanda had not worked with before, but she got along with them very well and quickly made new friends. [Avengers (1st series) #233-235]

One of the newest Avengers, Starfox of Titan, came up with the idea of hooking Vision's circuitry up to ISAAC, the world computer that ran the entire Eternal civilization that lived underneath the surface of Saturn's moon. The attempt seemed to be a blessing at first - though the Vision's body was still under repair, his mind was awake once more and capable of manifesting itself through a hologram anywhere on the mansion's grounds. At the same time, though, he seemed more egotistical and assertive than before. [Avengers (1st series) #238]

When the Vision's body was fully repaired, he startled Wanda with the revelation that they were not returning to domestic life as they had planned. Being hooked up to the mansion’s sensors, he had learned of a threat so big that it would require their presence among the Avengers line-up. Indeed, on the same day, nearly all the current roster and many other heroes were transported to Battleworld by the Beyonder to participate in the Secret Wars. [Avengers (1st series) #242]

Vision assumed temporary chairmanship of the Avengers, and he and Wanda worked to keep the peace on Earth while the others were missing. All was not right with the Vision, however - interfacing with ISAAC had corrupted the emotion-regulating chip Ultron had installed in him upon his creation. The now-unstable Vision had devised a benevolent plan of world domination and he needed the Avengers to do it. Using emotion-influencing technology, the synthezoid was able to convince the Wasp not to reclaim her role as chairwoman when she and the others returned from Battleworld. He then went to work establishing stronger ties with the American government and expanding the Avengers franchise with the West Coast Avengers. 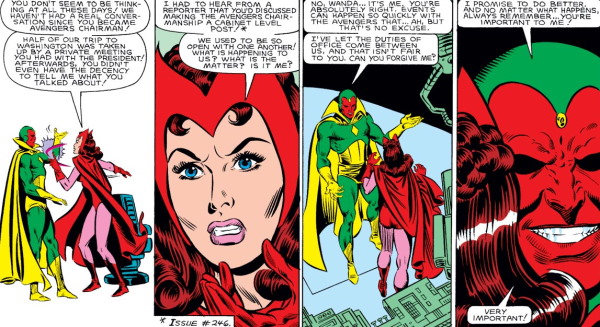 Wanda surely noticed her husband’s strange behavior, as he grew more distant with each day and left her out of his decisions, but every time she tried to address the subject he found an excuse. [Avengers (1st series) #243-248]

The Vision’s goal was to bring peace to the world and, thinking humanity incapable of governing themselves, he wanted to take over all computers and weapon systems, just like ISAAC was controlling all of Titan. When the house he and Wanda had bought was burned down by angry protesters, any doubts he might still have had were gone. He sent the Avengers away on fake missions to keep them busy and, gaining access to cyberspace, he placed the Earth's entire nuclear arsenal under his control. By the time the rest of the team learned of this, it seemed already too late. Not only was his logic faulty, as such an act would inspire more hatred towards super-humans but, also, his human mind was not capable of containing all that data and information without spreading too thin.

Wanda, Wonder Man and the other Avengers eventually managed to talk Vision down from the edge of possible armageddon, and destroyed Ultron's chip - thus restoring Vision's sanity. As a bonus, this act gave him an even greater level of empathy and expression than ever before. However, the governments of the world were now justifiably nervous where the Vision was concerned, and so Wanda and Vision agreed to step down from the active roster to help keep the peace. [Avengers (1st series) #252-255]

After a series of interrogation sessions by Henry Peter Gyrich, Wanda and Vision began to live the domestic life once more and bought themselves a new house in Leonia, thus showing that they would not let the world scare them away. A double attack by the Black Talon, Nekra and the Grim Reaper on both them and Wonder Man led to the Reaper’s death. However, it also reunited the Vision with his “brother" and mind-donor and led to him being accepted as kind of a third son by Martha Williams, Wonder Man’s mother. [Vision & Scarlet Witch (2nd series) #1-2]

During an encounter with Salem's Seven, Wanda ended up having to channel the magical energies of an entire town of witches and warlocks, funneling the power through herself and away 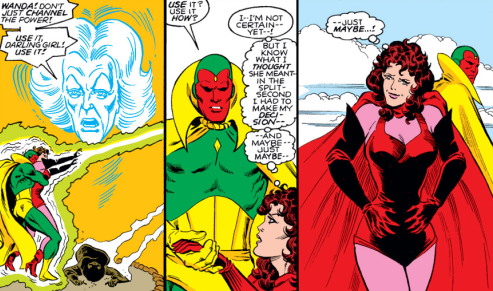 from the Seven's appointed goal. In the process, the mental image of the deceased Agatha Harkness appeared, telling Wanda to use her power wisely. The Scarlet Witch had no idea what her former mentor was referring to, so she used this massive dose of energy to supercharge her hex power, apparently overcoming the insurmountable odds against her becoming pregnant by a synthezoid. [Vision & Scarlet Witch (2nd series) #3]

In the following weeks, the couple enjoyed their domestic life, interacting with their neighbors and often being visited by Quicksilver and Crystal, as well as other members of the Avengers. Even Magneto, at the time being reformed and headmaster at Xavier’s school, was a welcome guest in their home. Wanda also took to tutoring a local girl in witchcraft, partially in order to pass on Agatha’s teaching and also to keep herself in shape. Making use of the Stranger‘s alien technology, the Toad tried to attack several times but Wanda never noticed, with the Vision, Magneto and Quicksilver fighting him off before things got too serious. [Vision & Scarlet Witch (2nd series) #6-7]

When Crystal was discovered to be having an affair with Norm Webster, one of Wanda’s neighbors, Pietro took it pretty hard. The Witch tried to help solve their problems, but Quicksilver misinterpreted this as her siding with his wife instead of him and angrily ran off, not being able to 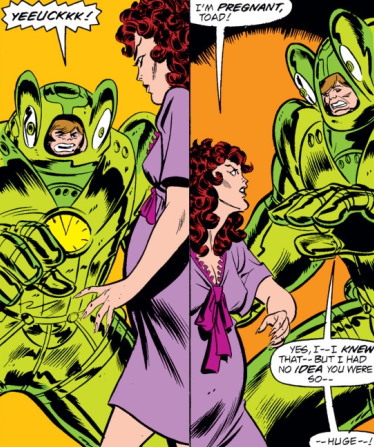 forgive her. It would be months before Wanda or anyone else would hear from Pietro again. When they did, it seemed that his mind had snapped (though his insanity was partially induced by Maximus of the Inhumans). [Vision & Scarlet Witch (2nd series) #10]

Shortly before Wanda’s pregnancy came to an end, the Toad attacked another time, and this time he succeeded in getting through all defenses and heroes blocking his way. Yet, when he came to be face-to-face with Wanda, he was disgusted by the sight of her. This was no longer the frail beauty he remembered from the days of the Brotherhood. Annoyed by the Toad’s reaction to her pregnancy, Wanda gathered enough power to defeat him and his technology by herself. [Vision & Scarlet Witch (2nd series) #11] 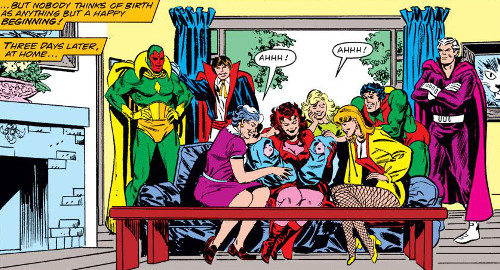