Searching for a means to restore Wanda’s power, they went to Europe and checked the libraries of several monasteries, until they came across an ancient book of spells. Wanda felt herself drawn to one of the formulas and, once it was cast, Arkon materialized in front of the three mutants. Throwing around his lightning bolts, he took himself, Wanda and, by accident, the Toad back to his world, leaving Quicksilver behind.

Arkon intended to make Wanda his queen and, also, as his planet’s energy rings were depleted, saw no other way than to destroy Earth’s sun to re-empower them. Wanda, of course, tried to prevent this, but she also saw a gentle, noble side of Arkon that almost made her respond to his 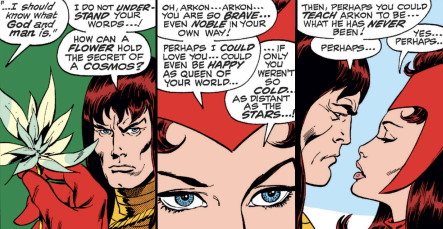 feelings. In the end, the Avengers, alerted by Quicksilver, came to rescue her. It was discovered that Thor’s magical hammer could easily recharge the energy rings, thus ending the need for a battle between Arkon’s world and Earth. Arkon let Wanda go, by now respecting her enough to no longer try to force her into a marriage, and revealed that the dimensional jump should have restored her mutant powers just fine. As this was indeed the case, the twins could rejoin the Avengers. [Avengers (1st series) #75-76]

In their absence, the Avengers had gained several new members, including the Vision. The repressed synthezoid still had the soul of a man and, despite his grave-cold voice and him being artificial, the Scarlet Witch found herself highly attracted to him. [Avengers (1st series) #80-81]

In an attempt to manipulate the female Avengers, the Enchantress approached them in disguise as the Valkyrie. She made up a false origin and, reminding the heroines of them always being in the shadow of their male comrades, she goaded them into forming the Lady Liberators, consisting of herself, the Wasp, Medusa, Black Widow and the Scarlet Witch. Quickly, they overpowered the male Avengers, but the Asgardian's plans were stopped when Wanda saw through her disguise. Once exposed, the Enchantress fled. [Avengers (1st series) #83]

When Earth was beginning to see the first effects of the galaxy-wide Kree-Skrull-War, the Vision and the Scarlet Witch were both captured by Ronan the Accuser. Facing possible death, Wanda revealed her feelings to the synthezoid and he, evidently, felt the same way. However, before their lips could touch for a kiss, he turned away, because of his own reservations of just "pretending" to be human. In the days after, he refused to talk about the incident, saying that Wanda was acting far too emotional about it. [Avengers (1st series) #91-93]

The matter was further complicated by Hawkeye's jealousy, who had fixated on his old feelings for Wanda after breaking up with the Black Widow, and Wanda's over-protective brother‘s violent disapproval. Though for different reasons, neither man wanted Wanda to get together with the Vision and, more than once, they made their opinions heard. [Avengers (1st series) #99, 102] 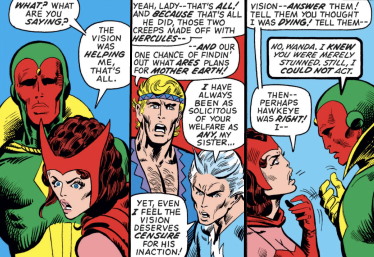 When the Sentinels re-appeared and captured the Scarlet Witch to use her as a power source for a device that would render everyone on Earth sterile, Pietro disagreed with the Avengers about the best way to save her. Projecting his anger towards the Vision, he announced that he could save his sister himself and departed, while the remaining Avengers, of course, continued to search for her as well. They found the robots‘ base in Australia and, after liberating Wanda from it, the entrance to the vast cave system was fused by Iron Man, the team not knowing that Quicksilver too had made it to the base and was still inside, several bones broken in a battle with one of the Sentinels. To the Avengers, Pietro was just missing in action. [Avengers (1st series) #102-104]

Wanda was determined to find Pietro and, along with the Avengers, followed every possible clue. Instead, however, they came across the Savage Land Mutates. The beautiful Lorelei got all the male Avengers under control with her hypnotizing voice and, just about when Wanda wanted to fight her alone, the Vision knocked their opponent out. The fact that he was not affected by the enthralling mutate’s abilities only deepened his belief that, as an artificial man, he was incapable of love and had no right to be with a human female. [Avengers (1st series) #105]

However, an encounter with the Grim Reaper, of all people, showed the Vision that he was

wrong.  As the Vision’s brain was based on the engrams of the Reaper’s brother, Simon Williams, aka Wonder Man, the villain considered the Vision his brother too and tried to make him join him in his villainous activities. Of course, the Vision only pretended to go along until he could free the other Avengers that the Reaper had taken hostage. However, along the way, he learned what it meant to have a brother and, as Wanda was missing hers, he offered her a shoulder to cry on. [Avengers (1st series) #107-108]

Vision and the Scarlet Witch now openly having a romantic relationship drove Hawkeye to quit the team. Likewise, when Quicksilver got in contact with the Avengers again, having been found and nursed back to health by the Inhuman Crystal, whom he intended to marry, he too dismissed this romance and actually forbade Wanda to love the Vision. Angrily, Pietro broke off the conversation, though not before telling his sister to only bother calling him again if she regained her senses. [Avengers (1st series) #109-110]

When the general public learned about the two Avengers’ feelings, their reactions were mostly as rash as those of Quicksilver. A few fans wished Wanda and Vision all the best, but many sent hate mails that the union of a machine and a mutant would be an insult to God and human society. Wanda grew bitter and temporarily gave in to some of the anti-human sentiments originally taught to her by Magneto. Several times, she claimed to be above “common humanity“ and belittled them for their narrow-mindedness, much to her beloved’s concern. [Avengers (1st series) #113-114, 119]

On one occasion, she was attacked by a few workers at a construction site, who wanted to show her the difference between kissing lips of plastic and those of flesh and blood. Wanda was aided by the martial artist known as Mantis, and invited her to Avengers Mansion. In retrospect, this seemed to have been a bad move, as the Vietnamese woman with perfect body control seemed

to be an equally good match for the Vision and soon was attracted to him. Just like Mantis’ lover, the Swordsman, the Scarlet Witch acted rather jealous and accused the Vision of wanting to have an affair with their new ally. The confused synthezoid was still learning about human emotions, much less human relationships, and didn't understand Wanda's need for reassurances that he loved her when he had already said so before. [Avengers (1st series) #125-126]

It was around this time that the Scarlet Witch first met the Whizzer, formerly of the World War II heroes known as the Invaders and the Liberty Legion. The Avengers were summoned to deal with a menace called Nuklo, who turned out to be the radioactive poisoned son of the 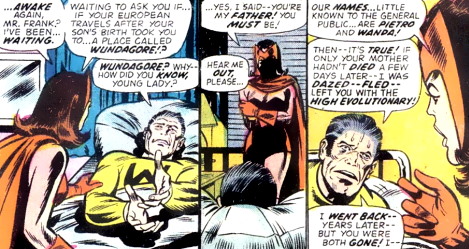 Whizzer and his late wife, Miss America. Wanda heard the older man's story of how he and his wife had traveled to Wundagore Mountain when she was pregnant a second time, only for Miss America to die in childbirth. The mid-wife Bova had presented Bob with twins, which she claimed his late wife had named Wanda and Pietro, but the Whizzer had fled in his grief. This story, along with Bob Frank and Pietro's shared speed power, convinced Wanda that he was her true father. [Giant-Size Avengers #1]

Although Pietro did not bother to notify them personally, the Avengers followed an invitation from the Inhumans and attended his wedding to Crystal. The Whizzer watched the event on a monitor screen in the infirmary of Avengers Mansion, where he was recuperating from a recent heart attack. During the festivities, Wanda once more tried to reason with her brother, but he repeated that, as long as she would remain with the synthezoid, he would have no love for her. [Avengers (1st series) #127]