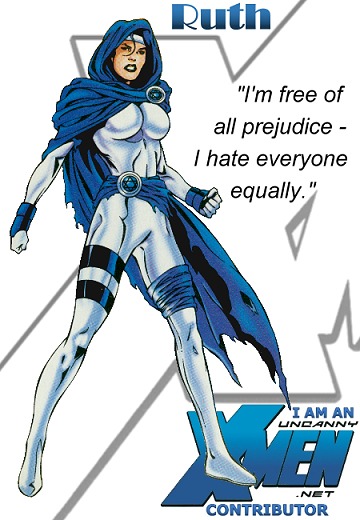 In the Brief:
While I had been aware of Uncanny X-Men.net for some time, I hadn’t actually considered working for any site, instead being a know-it-all pain in the butt on several forums, until Peter Luzifer contacted me and suggested I channel my destructive energies for good. I started with summarizing the Magik Limited Series (Illyana being a character dear to my heart) and have been on board ever since. I’m a regular summarizer of several current series, lots of back issues (the wilder the mix, the better), one of the editors for half of the summaries and also do work for the spotlight section.

History:
I was born in the Rhineland (not too far away from Cologne), but my family moved to Bavaria, Germany’s biggest state, when I was still an infant, so to all intents and purposes Eastern Bavaria is home, even if I never learned to speak the local dialect.

My mother always had a predilection for fairy tales, fantasy and science fiction. Add to that that my elder brother was (is) a comic freak, so it was no suprise that I became one as well. I started with Asterix, the the small German trade paperbacks of DC comics like Batman and Superman and eventually the small German trades of the few Marvel heroes published in Germany at the time (which was mostly Spider-Man, Fantastic Four, Avengers and, for some reason that escapes me, Conan). There were guest appearances of other characters as well in those pocket books. For some reason, the X-Men vs Dracula annual was printed in one Spider-Man pocket book. Having only been aware of the X-Men as those five characters in the odd yellow-black costumes, I was somewhat wary of that motley crew presented in the Dracula tale, but also intrigued. There were some more stories, chief among the German version of “God Loves, Man Kills.”

My interest grew when my brother brought home an American X-Men book – Uncanny X-Men #160, the story of how Illyana Rasputin became Belasco’s apprentice. Being only 12 or so at the time and only having barely two years of English lesson under my belt, I didn’t understand all of the story, but was fascinated. Even more so, when months later at a trip to Munich I found an US comic called New Mutants which again, among other characters, starred Illyana. From that point on, I bought X-Men and the New Mutants regularly. Slowly I also started other series and found that there was a world beyond Claremont’s little corner of the universe, writers like Alan Moore, Neil Gaiman, Grant Morrison to name a few, but the X-characters from that period will always be especially dear to my heart.

Hmm, what else is there to say: I graduated from school, went to university where I got a teaching degree and an M.A. in German and English (all those American comic books certainly helped my language skills). I held a couple of jobs through college. Working in a comic shop and translating comics (a few Image ones and later even a few from Marvel) were certainly among the high points.

I worked two years as an assistant teacher and wasn’t exactly wowed by the job. Afterwards I did some internships in a PR firm and a (very tiny) publishing house and more translating.
With the German economy being what it currently is I went back to teaching (English and German for grades 5-13 for those who care) which is at least a relatively safe job. If any of you has any wise insights on the workings of the teenage mind, please feel free to e-mail me. I am still puzzled.