Jennifer Susan Walters was born in Los Angeles, California. Her father, Sheriff Morris Walters, was married to Elaine Banner, paternal aunt of Bruce Banner. Although Bruce was five years older than her, he and Jen were close friends as children and had a shared love of reading. During family visits, they often spent time together engrossed in the local libraries. It was an unspoken understanding between them that Bruce was avoiding his abusive father at home, and they would stay at the library until well past closing. [Avengers Annual #13, Avengers (3rd series) #72] The Walters family were crushed when they learned Rebecca Banner was killed by her husband Bruce’s father, Brian, who was sent to prison for the crime. [Immortal She-Hulk #1] Jen and her best friend Jill Stevens grew up together and looked so much alike they were often mistaken for sisters. The duo regularly babysat for their neighbor Doctor Ridge and gave his son Daniel Ridge his lifelong nickname of “Zapper.” [Savage She-Hulk #2]

Growing up, Jennifer was at a crossroads over what to do with her life. Although she loved the law like her father, Jen also had an interest in dance, which her mother encouraged. Elaine Banner was killed in a car crash on the way to one of Jen’s dance recitals. While it was officially ruled a drunk driving accident, local mob boss Nick Trask made it an open secret that he orchestrated the crash and Sheriff Walters had been the intended target. Jen and her father retreated into their own worlds instead of consoling one another, separately pursuing justice against Trask. Jen put aside 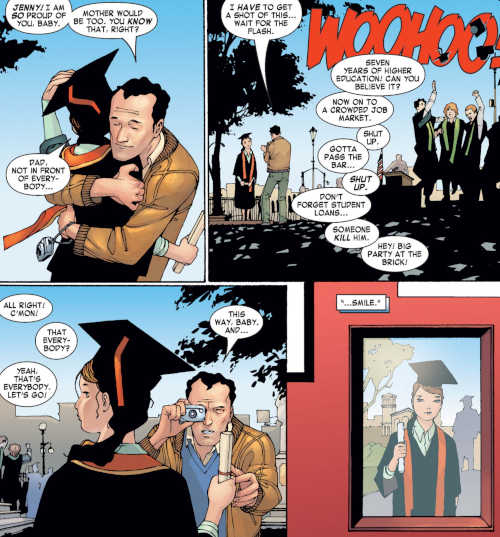 dance as a painful memory and devoted herself to the study of law. She attended classes at UCLA and Harvard Law, eventually graduating Summa Cum Laude. After graduation, Jen became a criminal defense attorney. Her faith in the justice system came from her father, but Sheriff Morris Walters was opposed to the idea of his daughter defending criminals instead of arguing for the state. Still, he couldn’t live in the family home with all the painful memories of Elaine, so Sheriff Walters moved into a condo and allowed Jen to live in the old home, rent free. [Savage She-Hulk #1, Sensational She-Hulk #53, She-Hulk (1st series) #1]

[Note: Giant-Size Hulk #1 had a flashback story where Bruce Banner visited Jennifer in California. Her appendix burst, and a stressed Banner changed into the Hulk to get her to the hospital. The Champions of Los Angeles didn’t understand the Hulk’s motives and attacked him, but he remained focused on getting help for Jen. This story seems to conflict with She-Hulk’s origin, detailed below, where she apparently had her first meeting with Bruce since becoming the Hulk.]

Jen picked up a case defending a crook named Lou Monkton, who was accused of killing Trask’s bodyguard. Trask hated Monkton as a former rival and framed him for the murder, but Jen hadn’t been able to uncover any proof to exonerate her client. Hoping to shake loose some info, Jen put 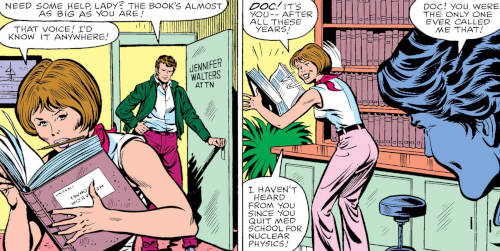 word out that she had found proof Trask killed his own bodyguard. It was during this case that Bruce Banner walked back into her life. Her beloved cousin “Doc” had fallen on hard times after an accident testing his experimental gamma bomb transformed him part-time into the Incredible Hulk. Bruce was wanted for crimes connected to the Hulk’s rampages, and he was hoping Jen could help negotiate his surrender.

As Jen and Bruce caught up, Trask’s hitmen performed a drive-by shooting at her house. Jen was shot by the thugs and was losing blood rapidly. Calling upon his limited medical training, Bruce rushed her next door to Doctor Ridge’s house for supplies and set up a blood transfusion. Bruce 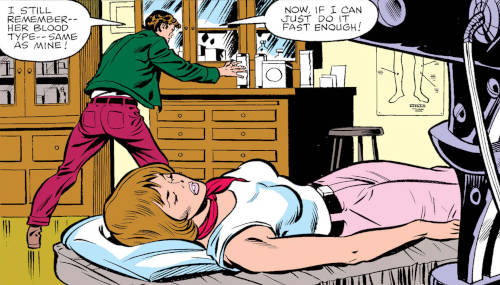 knew from childhood that he and Jen shared a blood type, and his donation helped stabilize her long enough for the paramedics to arrive and take her to the hospital. Afraid of drawing the authorities’ attention or triggering a transformation into the Hulk, Bruce Banner fled the area once he knew Jen was getting medical treatment.

(Future stories would reveal that Jen Walters actually died from her gunshot wounds. The gamma radiation in her system connected her to the Below Place, a metaphysical Hell ruled by the One Below All. Gamma mutates there can access the “Green Door” and return from the dead, though they typically don’t remember doing so.) [Immortal She-Hulk #1]

At the hospital, Jen was recovering when Trask’s thugs made a second attempt on her life, disguised as orderlies. As they swarmed her hospital bed, Jen Walters panicked and her adrenaline levels interacted with the gamma radiation from Bruce’s blood in her system, causing a startling transformation. A foot taller and several hundred pounds of muscle heavier, a “She-Hulk” emerged from the petite body of Jennifer Walters. The hunted became the hunter as the She-Hulk 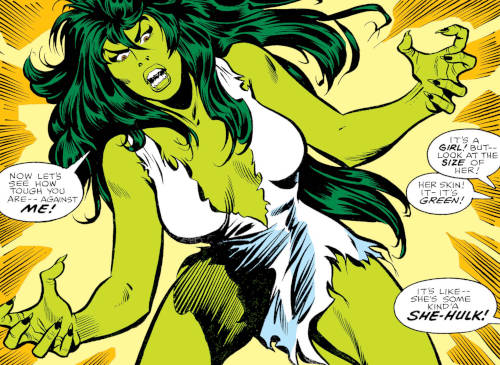 drove Trask’s men screaming from the hospital. Her raw strength tore open their elevator and used a streetlight pole to disable their getaway car. In a panic, the hitmen confessed to trying to kill Walters in the presence of police officers, ensuring their arrest. She-Hulk’s anger faded and she returned to her hospital room, coming to terms with the newfound power the blood transfusion had given her. [Savage She-Hulk #1]

After the shooting, Jen was more determined than ever to exonerate Lou Monkton and get Nick Trask indicted for his crimes. Unfortunately, even the testimony from Trask’s hitmen failed to sway the judge and the prosecutor to drop charges against Monkton. A.D.A. Dennis “Buck” Bukowski was a condescending prick who often hit on Jen while trying to show how much better of a lawyer 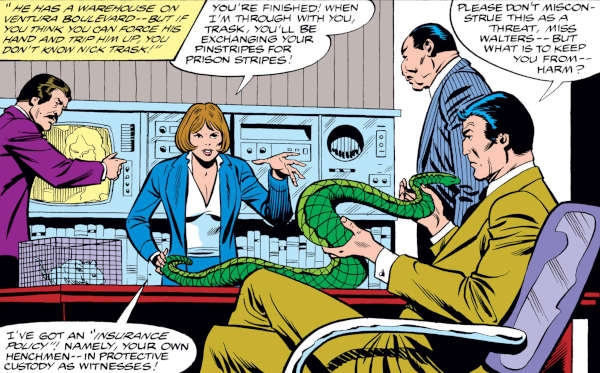 he was than her. Regardless of the truth, he moved to exclude the confessions as produced under duress by the She-Hulk. Jen re-interviewed the hitmen at the country jail, offering to drop the attempted murder charges against them if they made statements again under oath. Jen got cocky enough to meet with Trask personally and tell him he was going down.

At home, Jen finally let herself relax for the first time since leaving the hospital. She had a barbeque with Jill and the Ridges next door, including young Zapper, who was now preparing for med school. When the D.A.’s office called for Jen about papers for her to pick up, Jill volunteered to go instead so Jen could continue relaxing. Jen became suspicious, though, and spotted Trask’s men outside the Ridge house. They had tampered with her car on Trask’s orders, and now Jill was driving the out-of-control vehicle for her. Changing into She-Hulk, Jen pursued Jill to rescue her best friend before she crashed.

The chase became even more complicated as Buck Bukowski saw She-Hulk chasing Jen’s car and believed the “Green Gammazon” was attacking Walters. For a time, She-Hulk could only keep obstacles out of Jill’s path. As Jill entered the freeway, She-Hulk vaulted ahead of her and used her strength to block traffic with a convenient bus. She-Hulk braced herself to catch the car and save Jill, but Buck saw the scene and believed She-Hulk was menacing Jen Walters. He struck 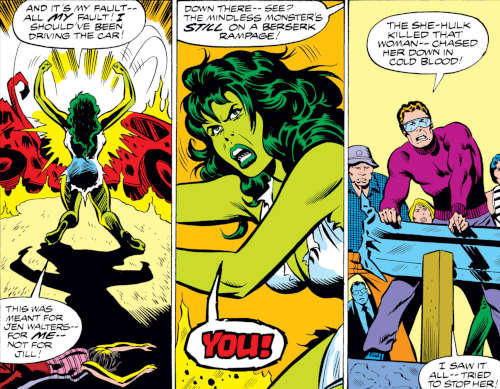 She-Hulk out of the way with his car, leading Jill to careen off of the bus, over the side of the freeway and into a gas tanker truck below. Jill did not survive the crash, leaving Jen furious at Trask and Buck for her best friend’s death. Still, she returned to court and parried the hitmen’s statements into finally getting Lou Monkton released from prison. [Savage She-Hulk #2] 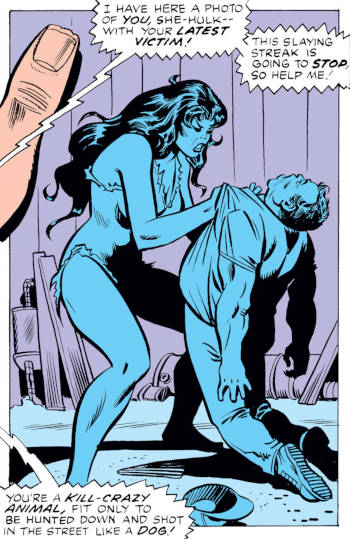 With Buck having already told the world Jen Walters died in the car crash, her survival was kept secret from the public after Monkton’s hearing to avoid further attempts on her life. Jen hid away with Zapper at the Ridges’ family beach house while she prepared her case against Trask. However, this had the unfortunate consequence of leaving Sheriff Walters convinced that She-Hulk had murdered his daughter. The situation only grew stranger when She-Hulk seemingly broke into the county jail and murdered Trask’s three hitmen. In fact, Trask had acquired an industrial prototype robot from Stark International and painted it to resemble She-Hulk. Further, She-Hulk came across Trask’s men disposing of the body of Jacob Fox, the Stark International truck driver who stole the robot for Trask. She-Hulk was photographed with the body, which only fed Sheriff Walters’ vendetta as he ordered a BOLO for the “mass murdering” She-Hulk.

Lou Monkton was out on bail and was captured by Nick Trask’s boys. He was forced to disclose the location of the Ridge beach house so Trask could send his robot after Jen Walters. At first, Jen had been terrified she was really committing murders as She-Hulk, for her memories in that form 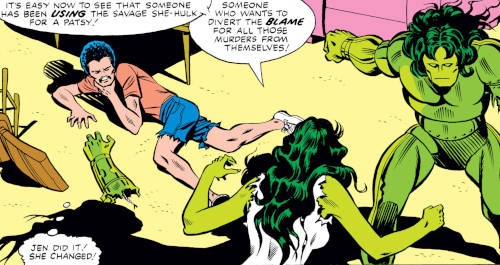 were never fully complete. After seeing the photo of She-Hulk with Fox, she nearly killed herself with tranquilizer pills while trying to prevent the change. Jen was forced to come clean with Zapper about her double life as he helped her recover from the overdose. The sudden arrival of the robot cleared Jen’s worries about She-Hulk, and she fought off the remaining effects of the tranquilizers to defend Zapper and destroy the robot imposter. [Savage She-Hulk #3]

Furious over all the interventions in her life, She-Hulk was ready to storm Trask’s warehouse for a final showdown. Through the robot’s optics, Trask had learned Jen Walters and She-Hulk were the same, and so he prepared a delicious revenge. Among the weapons and technology acquired from the Stark International shipment was a laser cannon powered by emotional energy. Trask kidnapped Morris Walters and worked him into a fury, convincing Walters that they both wanted She-Hulk gone. With Morris strapped into the laser cannon’s harness, his own grief and rage were continually amplified. And so, She-Hulk arrived at the warehouse only to face her own father, consumed with a murderous rage as he unwittingly trained the cannon on his own daughter. 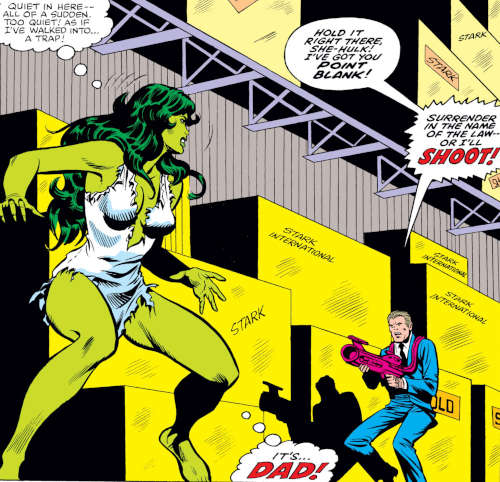 Zapper and Buck Bukowski also arrived on the scene and distracted Morris long enough for She-Hulk to grab the laser cannon and destroy it, letting Morris Walters return to his senses. Trask was on the run after the standoff and Jen revealed to the world (and her father) that she was still alive. Morris happily reunited with his daughter and they began to thaw the ice in their relationship that had stood between them since Jen’s mother passed. [Savage She-Hulk #4]