The glamorous Sersi is a member of the race of beings known as Eternals, created by the cosmic entities known as the Celestials. The Eternals, along with their immortal enemies, the Deviants, are offshoots of humanity, with the Eternals taking the role of defenders of humankind. [Eternals (1st series) #1-2] The one hundred Eternals were created equally, each fulfilling a different role in the "Great Machine" of Earth, and unable to breed true. However, the Eternals did co-exist within "family units", and so Sersi recognized her fellow Eternals Helios and Perse as her parents. [Eternals: Thanos Rises #1] For over a century, though, the discontent Eternal pre-teen called Sprite used their illusions to warp the perception and memory of their fellow Eternals. Many aspects of Eternal history became obscured or lost in this haze, and until recently the Eternals were confused about their own history and hierarchy. [Eternals (3rd series) #5] As a result, Sersi was sometime referred to as a 3rd or 4th generation Eternal, one of the younger of their people alive today. [Eternals (1st series) #17]

The Eternals were programmed by the Celestials to protect the Earth and humanity, especially from "excessive deviation" by the Deviants. However, not all Eternals agreed on the interpretation of their mission. Uranos believed a conquered Earth would be easier to protect, and a war broke about between his faction and that of Kronos, who supported more passive guidance. A second war between the Eternals arose between the factions of Zuras and A'lars over whether Eternals should try to expand the Great Machine by attempting to sire more true Eternals. Sersi opposed Uranos's conquest, but her position on the debate between Zuras and A'lars is unknown. [Avengers (1st series) #247, Eternals: Thanos Rises #1] 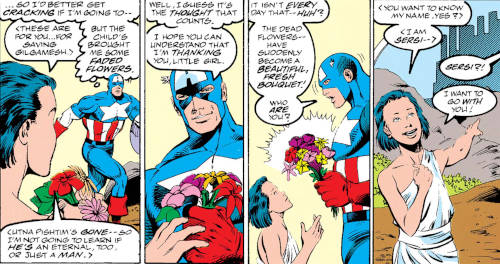 It was during the reign of the Eternal Gilgamesh when he was the King of Uruk that Sersi first met a human man who would come to be very important in her life in centuries to come – Captain America. Captain America was transported back in time and saved King Gilgamesh from an ancient sea beast. Sersi watched the rescue, and when Captain America returned to shore, she appeared to him as a child and gave him a bouquet of flowers. At first the flowers appeared dull and withered, but when Sersi handed them to Captain America , the flowers flourished – and it was then that Captain America realized who the “child” was – and who she would become. [Captain America Annual (1st series) #11]

[Note: Sersi's first historical encounter with Captain America in Captain America Annual #11 was originally written with her genuinely appearing as a child. In this new modern continuity it must be assumed that Sersi disguised herself as a child using her transmutative powers.]

Ancient lore would sometimes speak of a powerful sorceress called Circe. In fact, this was Sersi, though her name was frustratingly spelt wrong on a regular basis. During her time as “Circe,” Sersi was residing on a Greek isle when Odysseus and his crew stumbled into her villa. She was disgusted by their lack of manners and transformed them all into pigs. [Eternals (1st series) #4] Sersi did the ancient world a favor by returning all of the world's evils to what would be known as Pandora's Box, sealing the box with a powerful incantation. [Strange Tales (1st series) #109] At some point in the Egypt during the Eleventh Century BC, Sersi and the Eternals battled Apocalypse. [Eternals (4th series) #4] Over the years, Sersi would also engage in a relationship with fellow Eternal Makkari, mostly on-again-off-again, with the relationship coming to an end when one would get bored and cheat on the other. It was possibly during one of their relationships that Sersi was in Rome when it was ruled by Emperor Nero, and Makkari had to pull Sersi out of Rome during the Great Fire. [Eternals (3rd series) #4, Eternals (1st series) #5] Sersi later encountered Attila the Hun, whom she found to be a slob, though she was also grateful that he liked music and dance. [Eternals (1st series) #6] Sersi was also in Paris during the Great Siege by the Danes. [Chaos War #3] Sersi even confused Merlin by appearing in his court and demonstrating her abilities which the old wizard could not comprehend. [Eternals (1st series) #4]

Information on the exploits of Sersi and her fellow Eternals during modern times remains a mystery but, at some point, Sersi integrated herself with humanity, establishing life as socialite “Sylvia Sersi” on the Upper West Side of New York City. It was there that her cousin Ikaris arrived, needing somewhere safe to stay for his companion, Margo Damian, while he dealt with an attack by the Deviants. It was during this brief encounter that Sersi learned about the coming Fourth Host of Celestials, which would soon arrive on the Earth. Sersi watched over Margo until her

apartment was attacked by a Deviant. Although she easily dispatched this one, three more Deviants climbed into Sersi's apartment. Sersi deflected their attack, protecting herself and Margo, before she transformed the Deviants into lizards. [Eternals (1st series) #3-4]

With the Deviant situation proving quite dire, Sersi used a special mirror of Eternal technology (which functioned like a video communicator) to contact Olympia and was greeted by Makkari. As the two exchanging jovial comments with each other, Sersi remained unaware that more Deviants had entered her apartment. Makkari could only watch as Sersi and Margo were kidnapped. The two were taken to the Deviant ruler, Kro, where Sersi demonstrated her tough attitude by standing up to Kro and transforming part of his body into a tree. However, when Kro threatened to kill Margo, Sersi reluctantly transformed him back, before she and Margo were taken to the Deviants' raiding vessel. There, Sersi grew bored of being held “prisoner” and, despite the frequent threats by the Deviants to kill Margo if she didn't stop taunting them, Sersi continued to frustrate the Deviants, using her powers – and her lively vocabulary – against them. Sersi also seemed to become quite irritated by her human companion and callously made reference to Margo's short lifespan. Eventually, a truce between the Eternals and Deviants was reached by Thena, another Eternal, and Sersi and Margo were reunited with Ikaris and set free. Sersi later accompanied 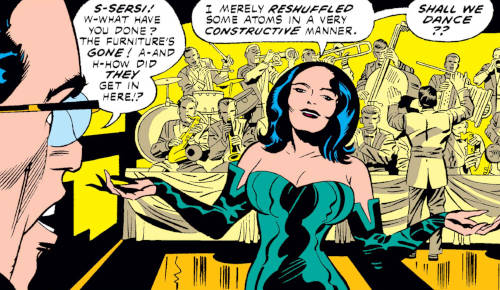 Ikaris, Thena, Margo and Kro when the existence of both races was deliberately revealed to the world's population. It was there that she first met Professor Samuel Holden, an anthropologist, who mediated the revelation of the species. [Eternals (1st series) #5-6]

Sersi returned to Olympia when Zuras, the oldest of the Eternals, summoned all Eternals back to their home so that they could perform the ritual of the Uni-Mind. Sersi brought Professor Holden with her, thinking that the ritual would be of interest to the anthropologist. As the Eternals began the levitation process that would carry them to a flame that represented light, Samuel Holden was quite unsure about what he had gotten himself into, but Sersi reassured him and accompanied him through the light. However, after the Uni-Mind process was complete and the Eternals had developed a new sense that all of humanity must unite as one, Sersi seemed frustrated with Samuel Holden's lack of perspective and human fear. Wanting to return to New York City to throw a “Uni-Mind party,” Sersi departed Olympia with Holden and several other Eternals. En route to their destination, however, they encountered the Hulk and were drawn into combat with him. Initially, Sersi didn't fight the Hulk directly, instead using her abilities to assist Ikaris and Makkari. 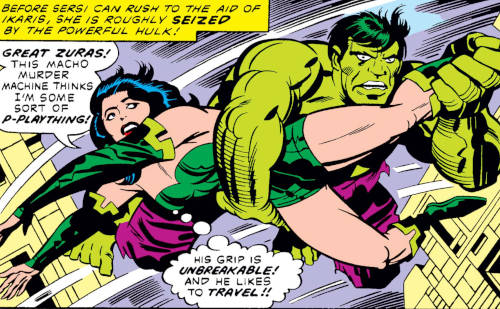 However, when the Hulk fled, Sersi gave chase and used her control over molecular structure to make the Hulk weigh more than a ton, causing him to crash into a building. Their respite didn't last long, as the Hulk was surged by some cosmic energy. Sersi was then snatched by the Hulk, and carried through the air.

Sersi found herself too weak to fight back when the Hulk took her to the top of a skyscraper. However, when she did recover, she used her powers to create a large monster that startled the Hulk and caused him to leap away. Sersi planned to launch another attack until Ikaris stopped her, certain that nothing they could do could stop their new foe. As the Hulk's power increased, Sersi, Ikaris and Makkari soon found themselves staring the Hulk down, with a military army at their side. Fortunately, Zuras arrived and used his power to cause the Hulk to flee, after which the green goliath continued his rampage. While Ikaris and Makkari pursued the Hulk, Sersi remained at Zuras' side.

When Zuras later ventured into a cavern beneath the city, Sersi followed soon thereafter. There she found her fellow Eternals, who were battling a creature called the Dromedan, a being created by the Deviants to be used as a weapon against the Eternals. Dromedan proved more than a match for the male Eternals, so Sersi tried her own abilities on the creature. At first she was overwhelmed, until she tried guile over strength. Sersi used her control over molecules to replicate Ikaris four times, so that Dromedan did not know which opponent to strike. The real Ikaris was then able to seemingly destroy Dromedan with a powerful energy beam. Sersi was pleased this adventure was over, as it was not the kind of party she was hoping for when she returned to Earth. [Eternals (1st series) #11-12, 14-17]

Sersi finally got to throw her party when she arrived at a meeting Zuras was having with government officials, who were concerned about the Celestials who had stationed themselves in the Andes. Sersi didn't seem that bothered by the Celestials and was not interested in the government meeting, so she used her powers to adjust the molecules of everything in the meeting room into country and western styled party. [Eternals (1st series) #18]

While Sersi continued to enjoy her life among the humans, attending parties and keeping herself up to date with popular culture and celebrities. Thena, her fellow Eternal, seemed not to approve of this and often accused Sersi of never having focused on her Eternal powers as much as the others. Sersi was determined to prove Thena wrong and so, when a Deviant launched an attack on her New York apartment, she defeated the Deviant by turning him into a Plaster of Paris cat. After this, she turned herself into a small statue in case any other Deviants followed. Sersi was found by the mutate Deviant known as Karkas and the mighty Thor, both of whom had converged on Sersi's apartment seeking assistance from her. Thor was looking for Margo Damian and 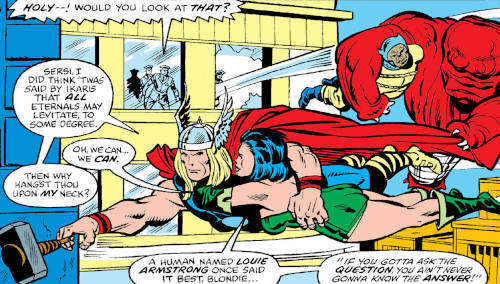 Karkas had information about a group of Eternals who were captured in new City of the Deviants. Sersi accompanied Thor and Karkas to locate the City of the Deviants, with Sersi flirting with Thor en route and determined to prove Thena wrong about her.

Arriving at the City of the Deviants, Sersi, Thor and Karkas were quickly attacked by a horde of 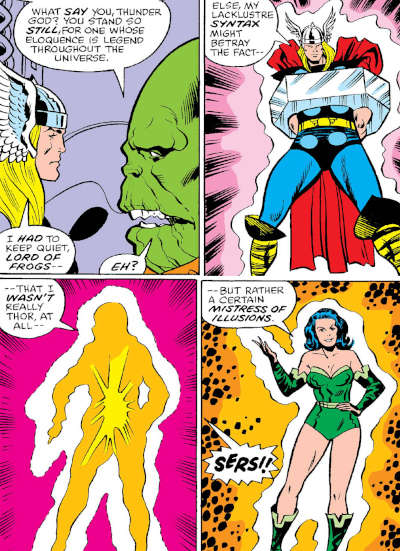 Deviants. Seemingly overwhelmed, Sersi claimed that she was not a fighter and appeared to turn and flee. Thor and Karkas, meanwhile, were captured by the Deviants and brought before Warlord Kro and his master, Tode, where the other captured Eternals were being held prisoner. In truth, Sersi had never run in fear; she actually used her powers to disguise herself as Thor and, upon revealing herself, the real Thor returned. Sersi joined in the battle against the Deviants and, in the course of the battle, the City of the Deviants began to collapse. Fortunately, Sersi, Thor and the other Eternals escaped. Sersi impressed the other Eternals with her quick thinking and the way she helped rescue them. However, after escaping the city, Sersi quickly returned to her playful ways as she accompanied the others back to Olympia. [Thor (1st series) #284-287]