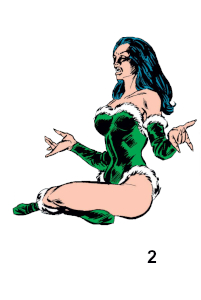 1) Like most of the Eternals, Sersi's wore extravagant, colorful clothing, with almost a chrome appearance. Sersi predominantly dressed in green, and was usually seen in a dark green leotard which was cut low down her breasts, and had light green bands through her waist and at the top of the leotard across her breasts. The top of her chest, shoulders and legs were bare, however she wore matching dark green boots and sleeves, both with matching light green bands running across the top and cutting down the middle. [Eternals (1st series) #3]

2) Sersi later began wearing a slightly altered version of the costume. Gone were the bands through the waist of her leotard, and light green bands were added at the leg openings of the leotard, matching the light green bands across her breasts and the top of her boots and gloves. The leotard was also adjusted slightly that the cut running down between her breasts was removed. [Avengers (1st series) #309]

-) During the winter, Sersi modified the costume so that the light green bands were replaced by a white fur trim, but reverted to her newer version of her costume soon after. [Avengers (1st series) #314]

4) When the Avengers started wearing brown jackets with large black A symbols in red circles to give themselves a more identifiable team look, Sersi would sometimes wear the jacket over her regular green outfit. Occasionally she wore strange knee pads, too. [Avengers (1st series) #346] sersi-costume04 Image suggestion: Avengers #346, page 2, panel 4

5) Sersi made quite a dramatic change to her costume, dropping her classic green look for a dramatic red and black attire. A strapless red high-cut leotard with black panels across her breasts and black leggings, leaving her shoulders, arms and the top of her chest bare. Thigh-high dark red high-heeled boots and matching gloves made the outfit quite striking. She wore two loose-fitting matching red belts across her waist, and sometimes wore the Avengers team jacket, too. On occasion she was seen wearing only the leotard component of the costume [Avengers (1st series) #355]

6) Like many other Eternals, Sersi donned a new look based on her classic green costume, consisting of a tight green bodysuit that was primarily dark green, except for the left side of her torso which had a light green panel. That panel extended across her breasts, while the sleeves were dark green, save for two panels on her right wrist and the glove on her left hand which were light green. The bodysuit ended across her thighs, leaving her thighs and calves exposed. Green stockings covered her knees and the same green boots covered her feet. Several dark green, flowing bands extended from her arms, and a strange, green headpiece with two horn-like pieces stuck up from her head, while a light green globe was positioned between them. [New Eternals: Apocalypse Now #1]

-) By the time she re-appeared at Avengers Mansion during the “Dissassembled” crisis, Sersi had returned to a classic green costume.

-) During the period where Sersi had lost her memories, she wore a variety of green-colored civilian clothing.

7) Settling in San Francisco, Sersi began wearing a skimpy new costume consisting of a very low-cut, green halter neck top which ended at her waist, dark green panties, knee-high dark green boots and dark green gloves. A panel at the top of the boots, gloves, her panties and across her breasts was a lighter color green. [Eternals (4th series) #2]

8) Upon joining the new God Squad team, Sersi also wore a new costume, consisting of a dark green bodysuit with an open front covered in straps of material. Light green thigh-high boots and long green gloves complemented this new costume. The bodysuit also had a high collar, and Sersi decorated her dark hair with a green stripe. [Chaos War #2]

9) Following her resurrection, Sersi began wearing a new costume, quite unlike any of her previous ones. This one consisted of a light purple leotard with several darker purple lines running through it forming diamond patterns. The darker purple also covered her breasts and her neck. Matching dark purple thigh-high boots and long sleeves which left her shoulders bare made the outfit particularly striking. A large purple belt hung around her waist and a see-through purple skirt draped down the front and back of her legs, leaving the sides of her legs exposed. [Eternals (5th series) #2]