After tens of thousands of years in stasis, the sentry on the long-forgotten base on Earth was disturbed by a human explorer. Coincidentally, the superhuman family, the Fantastic Four, were visiting the island and the resulting conflict with the robot resulted in the destruction of the base 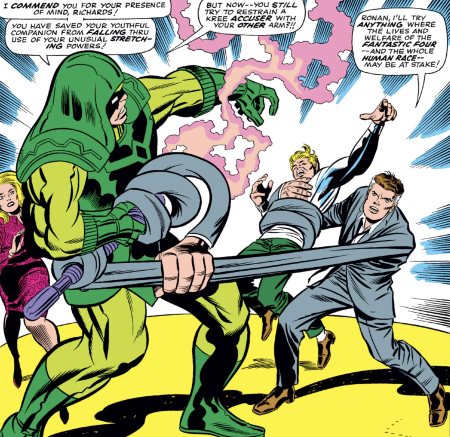 and sentry. However, before its destruction, the sentry managed to send one final report to its Kree masters.

When the Supreme Intelligence received the report, it immediately dispatched the Supreme Accuser Ronan to arrest and punish those responsible. The accuser abducted the Fantastic Four, expecting both to judge and execute the humans with ease. However, much to his surprise, the quartet and their abilities outmatched him in combat. Ronan was forced to flee, though this would only be the beginning of Ronan and the Kree’s renewed relationship with humanity. [Fantastic Four (1st series) #64-65]

After the Fantastic Four had defeated both a sentry and Ronan, the Supreme Intelligence decreed that the Earth warranted further investigation in order to assess humankind’s potential as a future threat for the Kree. An undercover reconnaissance mission was commissioned, overseen by Colonel Yon-Rogg, to investigate human kind.

Yon-Rogg selected Captain Mar-Vell as the scout who would go to Earth, despite protocol being that a team should be sent. Yon-Rogg in fact held a deep hatred for Mar-Vell due to past clashes in the field and a deep jealously of Mar-Vell’s relationship with the medic Una. Secretly, he hoped the captain would be killed. [Marvel Super-Heroes (1st series) #12]

Despite Yon-Rogg’s ill intentions towards Mar-Vell, the captain successfully managed to infiltrate the United States military and completed a series of missions for the Kree. However, Mar-Vell had a tendency to embrace some very “un-Kree” behaviors, such as compassion and mercy, which impacted on the success of some of his missions. Mar-Vell’s growing affection for humankind and Yon-Rogg’s continuing attempts to kill or court-martial Mar-Vell culminated in Una’s death and Mar-Vel being hurled into deep space. Fortunately for Mar-Vell, he encountered a seemingly omnipotent entity Zo, who enlisted the captain as his agent and empowered Mar-Vell to superhuman levels in exchange. [Captain Marvel (1st series) #1-11]

While these events would appear minor and inconsequential to the overall narrative of the Kree Empire, they were in actually in fact parts of an elaborate plot to overthrow the Supreme Intelligence. Supreme Accuser Ronan and Prime Minister Zarek resented the prominence of pink Kree in society, believing them to be a lesser race and blamed Supremor for promoting this. On the capital world of Kree-Lar, they established a fake cult to the god Tam-Bor and built a world-destroying device within their idol. They then manipulated both Yon-Rogg and Mar-Vell, knowing 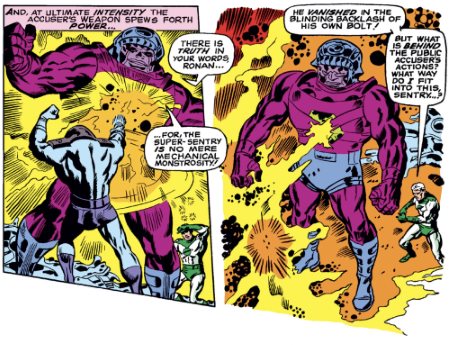 Mar-Vell’s nature and that Rogg’s jealously of him would drive the captain to rebel. Additionally, they had posed as the powerful entity Zo and enhanced his abilities with radiation, all to manipulate Mar-Vell into attacking the cult of Tam-Bor. The conspirators planned to frame Mar-Vell, a pink skinned Kree, as the leader of the cult. Ronan and Zarek planned to blame the cult’s rise in power on the Supreme Intelligence’s lax policies, and seize power from the living supercomputer by turning the Kree against it. However, it appeared Ronan and Zarek underestimated the extent of Supremor’s reach, as the supercomputer somehow learned of their schemes. All their months of efforts and manipulations were undone by Supremor dispatching a super sentry to disable the Tam-Bor Idol and arrest Ronan and Zarek. As an unwitting pawn who attempted to save Supremor from an attack by Zarek, Mar-Vell was pardoned by the Intelligence and allowed to return to Earth. [Captain Marvel (1st series) #16]

However, this was not the end of Ronan or Zarek’s schemes. The fallen accuser was soon freed from prison by likeminded blue Kree and, with the element of surprise on his side, led a coup against the Supreme Intelligence. Rather than kill the living supercomputer, Ronan locked the Intelligence away under armed guard and disabled its ability to influence advanced minds like those of the Kree. Ronan then focused on his next target of revenge: Earth.

Ronan’s first act as self-declared ruler of the Kree was the destruction of humankind. With its proclivity for generating superhumans, the former accuser saw the threat that Earth posed the Kree and wanted to wipe out the entire species before they could reach the stars. Many years 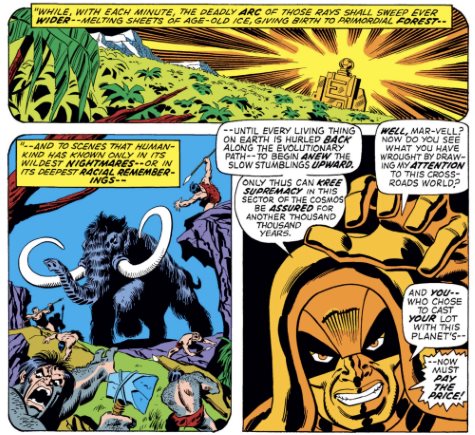 prior, when Ronan was a young acolyte, he had discovered long forgotten records of the Kree’s ancient creations, the Inhumans. With this knowledge, he was aware of the hidden Atavus Citadel in the Earth’s Artic Circle and travelled to Earth to activate it. It was his intention to activate the Atavus Plan, which would revert Earth to a prehistoric state. However, Ronan’s efforts were thwarted by Captain Marvel and the Avengers. Meanwhile, in Kree space, the Skrulls had launched an attack on the Kree and the Kree/Skrull War was renewed once more. [Avengers (1st series) #90-91]

Although the Kree had been at war with the Skrulls for millennia, at some point in the past hostilities had de-escalated to something akin to a cold war. However, with these new attacks by the Skrulls, the war was once again very “hot.” Due to its strategic location in the cosmos, the Earth soon became a focal point in the war, with both sides vying for control. Again utilizing his knowledge of the Inhumans, Ronan sent a contingent of Kree soldiers to conscript the Inhumans into the war efforts. They forged an alliance with Inhuman Maximus, who had recently taken control of the Inhumans from his brother Black Bolt and would supply soldiers in exchange for Kree technology. However, the Avengers intervened, returning rightful ruler Black Back on the throne. While they failed in acquiring any Inhuman soldiers, the Kree did manage to retrieve one seemingly useless human, Rick Jones.

Meanwhile, the Skrulls abducted Captain Marvel and forced him to develop a Kree Omni-Wave Projector, a communication means that could also double as a powerful weapon in the wrong hands. Upon completion of the weapon, Mar-Vell cleverly used the Omni-Wave projector to cast an illusion that he was still working on it, even as he attempted to use it to contact Rick Jones. 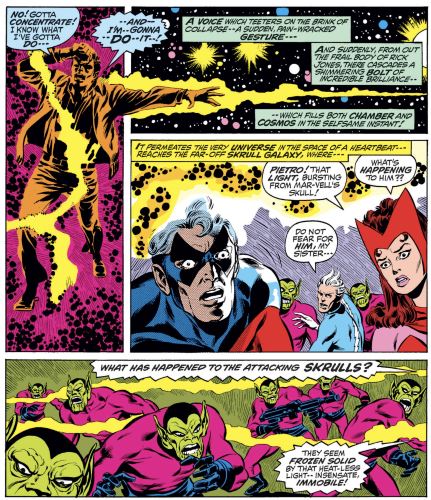 Unknown to all, many of the events surrounding the war, as well as Captain Marvel and the Avengers actions, were part of a long game by the Supreme Intelligence. The supercomputer knew that, while the Kree were evolutionarily stagnant and would never grow beyond their current state, humanity’s destiny contained potential unseen in the universe. In order to take advantage of the human’s “Destiny Force” for the Kree, the Intelligence facilitated a bond to be formed between Rick Jones and Captain Marvel, which would catalyze Rick’s latent potential. Mar-Vell contacting Rick via the Omni-Wave protector was the final trigger to unlock Rick’s latent potential.

Imprisoned together, the Supreme Intelligence was present when Rick’s power was unleashed, and mentally coached him into ending the Kree-Skrull war in an instant. With the Destiny Force, Jones froze every Kree and Skrull in place, transforming them into living statues. The Supreme Intelligence was able to take control of the empire once more, though it lost access to the Destiny Force when Rick Jones’ power went into remission and the young human almost died. However, with Supremor’s influence, Rick Jones and Mar-Vell merged, saving Rick’s life. [Avengers (1st series) #92-97]

Later, former Imperial Minister Zarek resurfaced, presumably having also escaped from the Supreme Intelligence’s custody. Zarek formed a group of likeminded blue Kree, who all wished to overthrow Supremor for its “liberal policies” regarding pink Kree. The group based themselves out of the ancient Kree city built by their ancestors on the Blue Area of the Moon and dubbed themselves the Lunatic Legion, a pun based on the Latin word “luna” for moon. They initially attempted to murder Captain Marvel, seeing him as a threat to their cause, but failed. [Captain Marvel (1st series) #34-38]

The Supreme Intelligence then lured the Lunatic Legion to Hala under the false pretense of an alliance against Mar-Vell. Its actual desire was to lure Mar-Vell and Rick Jones to Kree-Lar and further strengthen their bond. Unsurprisingly, Supremor’s aid in saving Rick Jones’ life earlier, by 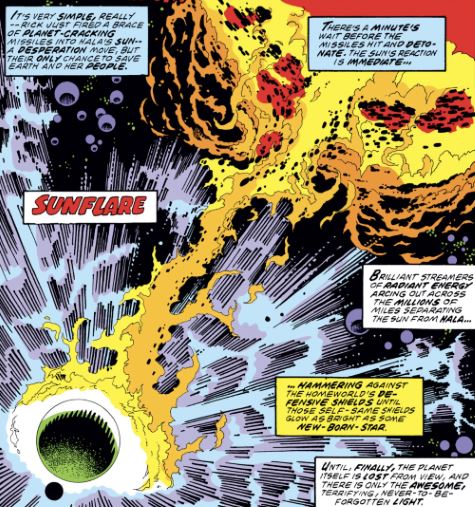 urging Mar-Vell to merge with him, had been yet another part of the Kree leader’s schemes. By merging the pair and manipulating events to develop and strengthen their bond, the Intelligence continued to move closer to unlocking humanity’s secrets and solving the Kree’s genetic stagnation. Mar-Vell and Jones were subjected to a series of challenges by the Surpreme Intelligence, which culminated in the pair taking control of a Kree destroyer and directing a planet destroying solar flare against Hala in a desperate gamble to defeat the Intelligence. The gamble paid off and Supremor was forced to divert all the energy on Kree-Lar to the planet’s shields, which temporarily disabled all technology on the planet, including the Supreme Intelligence itself. [Captain Marvel (1st series) #41-46]

The Supreme Intelligence was presumed destroyed from this attack, so leadership of the Kree was taken over by the Supreme Science Council, which was lead by a man named Phae-Dor. Tensions between the Kree and Skrulls escalated quickly during this period and the two empires were on the verge of a initiating a “War of Three Galaxies,” with Earth once more in the middle of 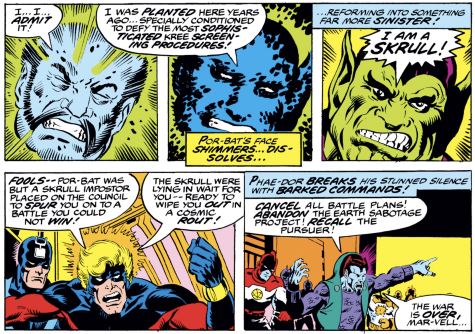 the Kree and Skrulls. This was largely due to the fact a Skrull had infiltrated the Council and was manipulating them into placing the Kree in a weak position. Much like his predecessor Ronan, Phae-Dor ordered the Inhumans of Earth to be conscripted into this war, but the reclusive Earthlings nevertheless fought off the Council’s agents. Captain Mar-Vell then fought his way through to the Council, where he managed to expose the Skrull infiltrator amongst them and prevent the Kree-Skrull War from reigniting. [Inhumans (1st series) # 3, Captain Marvel (1st series) #53]

When it learned Carol Danvers, a companion of Mar-Vell, had been imbued with Kree DNA and had developed superhuman abilities, the Supreme Intelligence resurfaced and sent a brainwashed Ronan to kidnap her for study. However, the Intelligence underestimated Danvers’ abilities and, with the help of Mar-Vell, she escaped Supremor’s clutches. [Ms. Marvel (1st series) #18-19]