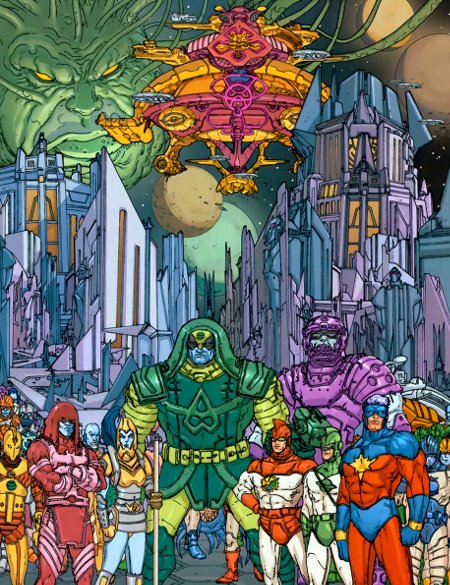 Originating from the planet Hala, the Kree bear a superficial resemblance to humankind. Millennia ago, primitive Kree were artificially evolved by the race known as the Progenitors, using the substance Primagen. The full effects of this, beyond a rapid leap forward in evolution, is unknown.

Traditionally, “pure” Kree, descended from the original Kree, possess blue skin. However, a second racial group possessing pink skin developed over time, due to interbreeding with other species. These “pink Kree” could easily pass for human. Although pink Kree have since become the majority, they have generally been treated with racial prejudice by the blue Kree, due to their “impure” nature.

Having evolved under a stronger gravity and a slightly different atmosphere mix, the Kree are stronger and faster in lower gravity planets such as Earth, but must consume a chemical breathing formula. Furthermore, the Kree’s highly advanced technology has allowed them to advance certain individuals beyond their physical limits through cybernetics and genetic engineering.

Unfortunately for the Kree, their entire species’ evolution has stagnated, reportedly as the result of one Kree attempting to acquire the Crystal of Ultimate Vision and failing its tests. While the Kree have attempted numerous times to break this stagnation, only one attempt was (temporarily) successful… 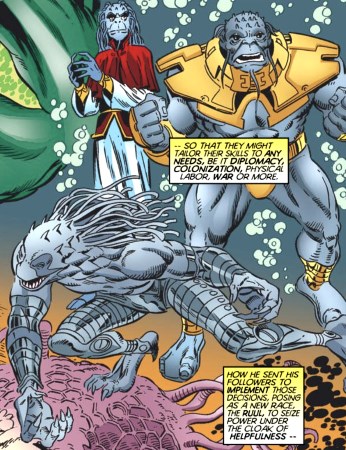 At the culmination of the Kree/Shi’ar War, ninety percent of the Kree were wiped out by a Nega-bomb. The remaining ten percent were blasted with a large amount of radiation which jumpstarted their evolution. With the power of the Forever Crystal, the Supreme Intelligence sped up the Kree’s evolution, transforming them into the Ruul.

The Ruul were humanoid, with grey skin, tendrils on the back and side of the head and an overall reptilian appearance. The most notable ability of the Ruul was their ability to evolve their forms spontaneously to suit whatever situation was required. The Ruul were seen to be able to strengthen themselves for physical labor, increase their senses and speed for hunting and combat, or increasing their intelligence for diplomacy.

Later, the Ruul were reverted back to the Kree under undisclosed circumstances. 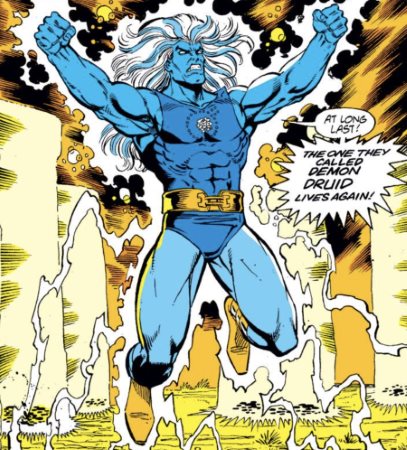 In addition to being experimented on by the Progenitors, the early Kree were also manipulated by the Celestials. Much like humankind, the Celestials experiments resulted in the creation of Kree Eternals and presumably Deviants, though these latter have not been seen.

Kree Eternals possess control of their own matter, which provided enhanced durability and strength, immunity to disease, energy manipulation, flight, immortality and regenerative abilities. The only known Kree Eternal, Ultimus, also demonstrated the ability to alter his size to greater than that of a regular Kree.