While a resurgence of war between the Kree and Skrulls had been recently averted during Phae-Dor’s leadership, matters changed when the Skrulls suffered two major blows to their society. Firstly, their homeworld was consumed by Galactus, killing the emperor and splitting the Skrulls into various factions warring for control of the empire, and secondly the sudden and mysterious loss of their ability to shapeshift. The Supreme Intelligence sent a squad to infiltrate the Skrulls and validate whether the rumors of the loss of their shapeshifting were true, which in turn

triggered a retaliatory response from the Skrulls. Feeling vulnerable due to the mysterious loss of their abilities and expecting an attack by the Kree, one prominent faction of the Skrulls declared the Kree-Skrull War had begun anew.

The Skrulls’ first target was the Kree world Sandomar II. However, the Supreme Intelligence concocted a plan to evacuate the planet and detonate it when the Skrull fleet drew close, annihilating it. Unfortunately, the Skrulls drew away from the planet at the last minute, suggesting there was a mole on Supremor’s council. The Intelligence reviewed a multitude of data and concluded that its techno-simian helper was in fact the mole and executed the suspected spy. However, it failed to determine that there were in fact two Skrulls within its court. Councilor Nenora was also an infiltrator and, without her ability to shapeshift, was trapped in the form of a Kree. Believing the Skrull spy eliminated, Supremor placed additional responsibilities upon Nenora, making her its chief coordinator. [Silver Surfer (3rd series) #4-6]

This lapse in judgement of the Intelligence’s may have been a result of the living supercomputrer absorbing the minds of pink Kree into its collective consciousness, something it had never done before. It seemed that the prejudice between the blue and pink Kree survived beyond the corporeal and the disparate minds were extremely hostile towards each other. Seeking a solution, the Intelligence managed to acquire the one of the Infinity Gems, using it to keep the minds in check. By happenstance, the Elders of the Universe, a group of powerful and ancient individuals, also desired the gem and their representative, the Contemplator, had attempted to negotiate a trade for it, only to be rebuffed by Supremor.

[Note: the gem acquired by the Supreme Intelligence was referred to a Soul Gem, though at this point the Infinity Gems had not been established as having separate “identities” (i.e. Time, Mind, etc). The most likely candidates for this gem are the Soul Gem or Mind Gem]

The Kree drew the ire of the Silver Surfer when they attempted to annex his home world, Zenn-La, for the war. The Surfer easily destroyed the fleet that attacked Zenn-La, then faced the Supreme Intelligence and convinced it to leave his homeworld alone. However, the former herald of Galactus pushed his luck by trying to force the Kree to leave Earth alone too. Supremor sucked the Surfer’s mind into its conglomeration of minds in retaliation. Unfortunately for the Intelligence, the Surfer managed to fight its way free of Surpremor’s clutches and stole the Infinity Gem in the process. Without the gem to hold its disparate minds together, the Supreme Intelligence could not regulate the conflict between the minds of the pink and blue Kree minds it contained was reduced to a babbling mess. In a twist of cosmic irony, the next in line to lead the Kree was the Skrull infiltrator Nenora. [Silver Surfer (3rd series) #7-8]

As Supremor’s Chief Coordinator, Nenora took power in the empire. The Skrulls immediately sent Nenora’s lover Aptak, conveniently stuck in the form of the Wazilian ambassador, to give her instruction. Nenora, however, had other ideas and murdered Aptak so she could rule her own way. Furthermore, she manipulated the Skrull factional leader to whom she reported into leading his fleet into a trap, which eliminated the last Skrulls that knew her true identity, thus solidifying her position. [Silver Surfer (3rd series) #13] 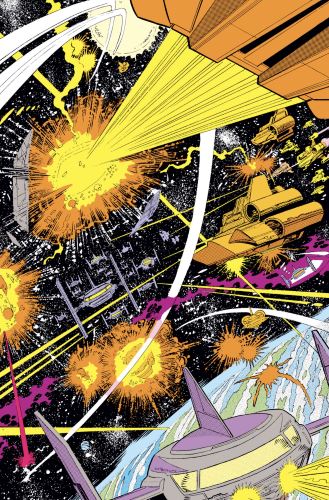 The Silver Surfer became a pawn of the Skrulls in the war when they convinced him to aid them in unlocking their shapeshifting abilities, which he hoped would end the war. While he did help them develop the ability to unlock their shapeshifting one by one, this did not end the war. Meanwhile, the Skrulls formed an alliance with a space pirate named Reptyl, a criminal who was strong enough to murder the Contemplator. Unknown to Reptyl, however, his second in command, an apparent buffoon by the name of Clumsy Foulup, approach the Kree offering to betray Reptyl and the Skrulls. Foulup revealed the Skrulls’ plans, which lead to an epic ambush and near obliteration of the Skrulls leadership and their fleet. [Silver Surfer (3rd series) #25-27]

Despite her confidence in her now apparently infallible power over the Kree, Nenora was caught surprised by an attack by the Silver Surfer and Queen S’Byll of the Skrulls. S’Byll had been given the ability to restore shapeshifting in other Skrulls and used this on Nenora to reveal her ruse to the Kree.

Meanwhile, the Kree had another hidden enemy: the ghost of the Contemplator. The dead Elder had manipulated Clumsy Foulup into betraying and killing Reptyl, in revenge for his own murder. Next, he set his sights on loftier goals, in particular rulership of the Kree. As a sort of astral projection, the Contemplator could come and go as he pleased through the Kree’s greatest strongholds and, during these travels, discovered the catatonic body of the Supreme Intelligence. The Elder possessed Supremor’s unresponsive body and used its vast abilities to start influencing the Kree, in particular the pink Kree, into seeing Foulup as a war hero. Intending to use Clumsy’s fame to support his unveiling the “revived” Supreme Intelligence, the Contemplator severely underestimate Foulup’s guile. The canny alien convinced the telepathic Cotati to aid him against the Contemplator and, when “Supremor” returned, the plant creatures mentally forced him to place Clumsy Foulup as the new leader of the Kree, before exorcising the ghost. In a near unbelievable turn of events, the Kree found themselves ruled by a greedy, cunning, non-Kree pirate. [Silver Surfer (3rd series) #28-31]

Unsurprisingly, Foulup used his newfound power to line his own pockets by raising taxes and living like the king he now was. Although normally anyone would see through this abuse of power fairly quickly, Foulup had formed an alliance with the Cotati, who used their psychic abilities to keep him in power. However, when Thanos used the power of the Infinity Gauntlet to wipe out half 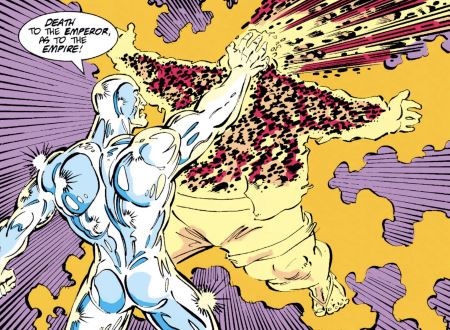 the life in the universe, Foulup’s detractors saw their opportunity. Thanos’ actions had wiped out all of Clumsy’s Cotati allies, and the emperor was now vulnerable. Generals Ael-Dan and Dar-Benn implemented a plan to use a Silver Surfer robot to publicly assassinate Foulup in the name of the Skrulls, allaying any suspicion against themselves when they “killed” the Surfer and seized power immediately after. As each represented one of the two pink and blue races, Ael-Dan and Dar-Benn took joint leadership of the Kree to avoid an ethnic civil war between the races and declared martial law due to the new “war” with the Skrulls that they claimed was coming. [Silver Surfer (3rd series) #53]

While Ael-Dan and Dar-Ben had used a fictional war with the Skrulls to seize power, a real war with the Shi’ar came soon after they took the throne. Both sides executed various strategic moves during the war, such as the Kree’s theft of the Nega Bands from the tomb of Captain Mar-Vell, who had died from cancer a few years earlier, or the Shi’ar acquiring parts from the long lost Psyche-Magnetron. Still, perhaps one of the boldest strategic moves in the early stages of the war was the assassination of Ael-Dan and Dar-Ben by Deathbird, sister of the Shi’ar empress Lilandra.

However, the Supreme Intelligence had secretly recovered from its recent catatonia and had 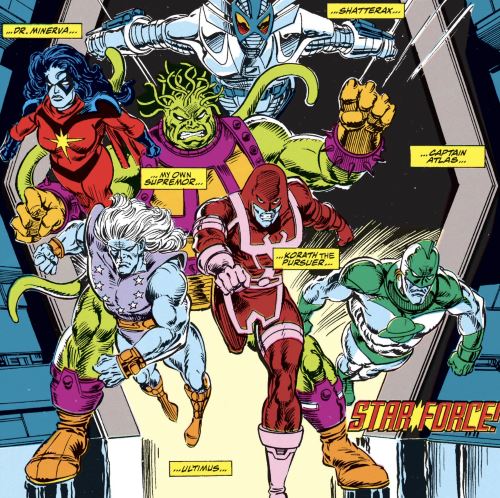 surreptitiously begun pulling together a strike force team of Kree Superhumans. A Kree scientist exiled to a backwater factory was transformed via his own technology into Korath the Pursuer. On a bleak planetoid, the immortal called Demon Druid was summoned by the Supreme Intelligence, who revealed his origins as a Kree Eternal and was given the new name of Ultimus. Shatterax, a cybernetically enhanced supersoldier, was recruited. Later, Captain Atlas, Doctor Minerva and Ronan were all conscripted into Supremor’s team: Starforce!

Meanwhile, the Shi’ar had commenced construction on a superweapon, using the parts from the Psych-Magnitron they had acquired. The key final piece turned out to be the Nega-Bands, which they managed to steal from the Kree agents who had stolen then from Mar-Vell’s tomb. With all these components, the Shi’ar completed construction of the Nega-Bomb, a devastating weapon capable of laying waste to a whole galaxy.

The Shi’ar agents engaged to deploy the Nega-Bomb, the Starjammers, ultimately had a crisis of conscience and chose to abandon the weapon in space rather than use it. Unfortunately, the super weapon didn’t remain abandoned for long, as it was retrieved by Skrull agents. Meanwhile, the Kree Starforce made an assassination attempt against Empress Lilandra but they were thwarted by the Avengers, who had come to plead for the war to end. The Avengers also helped reveal a Skrull with in the Kree court, indicating the shape shifters had been manipulating matters all along.

Unfortunately, it was too late. The Skrulls that had acquired the Nega-Bomb detonated it within the heart of their most hated enemy’s empire. The devastating blast killed ninety percent of the 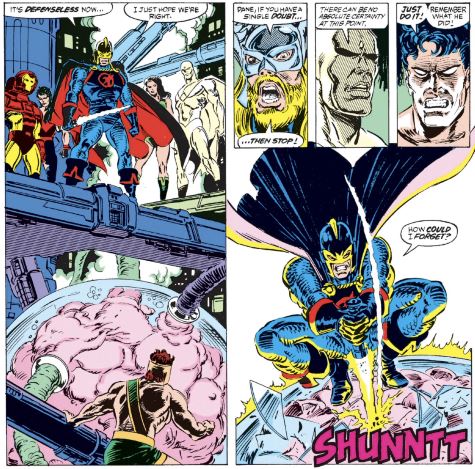 Kree population. As the winning party on the war, the Shi’ar absorbed the remnants of the Kree into their own empire and Lilandra installed her sister Deathbird as regent.

The mighty Kree Empire had been all but wiped out and what remained brought to its knees, so it was all the more shocking when the Supreme Intelligence revealed to the Avengers that this was exactly what it had wanted. From the shadows, the supercomputer had orchestrated the events of the war through Skrull agents to facilitate the detonation of the Nega-Bomb, which it believed would provide the Kree with the necessary radiation to jumpstart their evolution. Appalled by this callous disregard for the life of its people, a group of Avengers executed the living supercomputer. [Operation: Galactic Storm crossover]

As viceroy of the Kree, Deathbird took Supremor’s Starforce as her own, personal guard. She was a cruel and fickle ruler and did little to garner the support of the Kree people. Unsurprisingly, resistance movements and small rebellions formed, though they were always quelled by the Shi’ar. In some parts of the former Kree Empire, Shi’ar rule was so oppressive that Kree refugees engaged smugglers to sneak them to the safety in the neutral Clench Union. [Quasar (1st series) #35, X-Men Unlimited (1st series) #5, Starjammers (1st series) #1]