Thought dead by all, the Supreme Intelligence had in fact foreseen its death and made preparations to avoid it. When the Avengers destroyed its core, Supremor transmitted itself to a satellite, which was recovered by its Skrull agents and brought to Earth. Meanwhile, two disparate 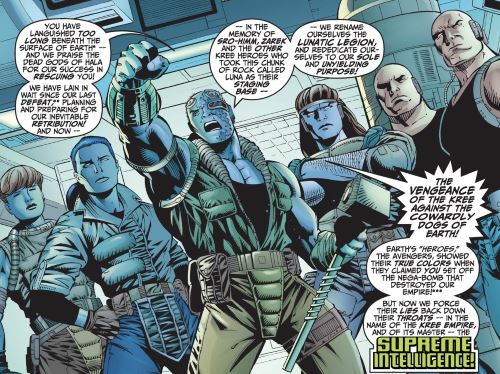 groups of Kree came to Earth to punish mankind for the role they had played in the Kree’s downfall. The first group, the Underground Militia, planned to detonate a nega-reactor under New York City, wiping out the whole planet. Once again, this was another of Supremor’s plans. In its weakened, energy-based form, the Intelligence could do little beyond influencing the mind of others and now merged with Rick Jones, manipulating him into believing his latent abilities were returning. Jones absorbed the full amount of nega-radiation from the Militia’s reactor, allowing the Supreme Intelligence to reconstruct its physical form once more. Supremor intended to wait patiently on Earth while Kreekind slowly mutated from the energies of the Nega-bomb. [Imperial Guard #1-3]

The second group of rogue Kree focused their vengeance more specially on the Avengers for assassinating the Supreme Intelligence. They executed several unsuccessful plans against the Avengers before they discovered the Supreme Intelligence, now residing on the Blue Area of the Moon. Lead by Galen Kor, the group dubbed itself the Lunatik Legion in honor of Zarek’s group, which had previously based itself on the Moon. The Lunatik Legion executed a bold plan to transform all of humankind into Kree, using stolen Terrigen crystals and Kree technology. This was contrary to the Supreme Intelligence’s plans, however, as it had made great pains to thin the Kree population and dose them with nega-radiation. It covertly contracted the Avengers to warn them and the team promptly dispatched the Legion’s weapon. The Lunatik Legion themselves were also obliterated, converted into energy to fuel their own weapon. The Supreme Intelligence was taken in custody by the Avengers and SHIELD, who established a prison on the moon to contain the supercomputer. However, this too was exactly what it wanted; somewhere comfortable to wait while the Kree evolved. [Live Kree or Die crossover]. 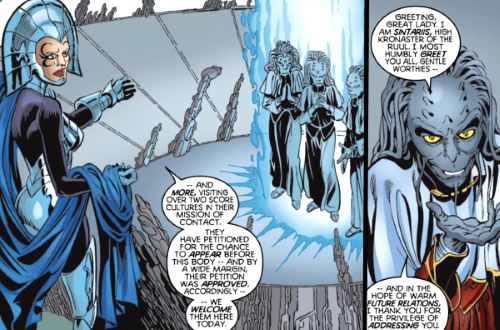 Being placed in the custody of humankind meant the Supreme Intelligence was in a prime position to assist the Avengers with the Destiny War, a battle across time between Kang and Immortus. In the aftermath of the war, Supremor acquired the Forever Crystal, an immensely powerful artifact that provided control over time. With the crystal, the Intelligence sped up the evolution of the Kree, until they transformed into a new species: the Ruul.

With the ability of personal evolution on an individual basis and having gone unnoticed by the other sentient races of the universe, the Ruul were in a perfect position to manipulate their way into power. The Supreme Intelligence quickly concocted a scheme. While the Ruul began building a fleet, a few of their number, specifically evolved for diplomacy and intrigue, reached out to the Galactic Council as a “new” spacefaring species from beyond charted space. They approached two score different Council member species, providing gifts of technology and knowledge, garnering good will. They then drove Ego the Living Planet into a frenzy, right at the point when they were petitioning the Galactic Council for membership. With a key piece of technology provided by the Ruul, Ego was captured and the Ruul won their membership from a grateful Council.

Now a member of the Galactic Council and with their newfound respect won from their actions, the Ruul proceeded to the next stage of their plan. Anti-human sentiment was at an all time high amongst the Council, in part due to the display of power demonstrated by human mutant Charles Xavier trying to mentally subdue Ego. The Ruul proposed the Council convert planet Earth into a prison for criminals from across the cosmos, an act that would both keep Earth occupied and out of galactic affairs. For the Ruul, this also had the benefit of keeping the humans out of their schemes as well as districting the Council.

While the Supreme Intelligence had previously invested much interest in humankind, now that the Kree had evolved, the computer presumably no longer saw in value in humankind. Ego had been reduced down to a spore by the Ruul and sent to Earth. Once on the planet, the spore would spread and absorb the planet into a new body for Ego, a process that created energy that the Ruul could collect and use. In the meantime, the Ruul launched their fleet in secret, reclaiming Hala and numerous other Kree worlds from the Shi’ar. 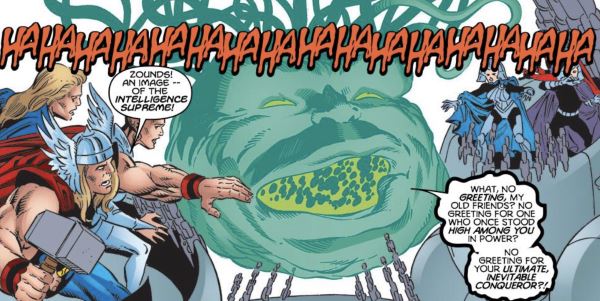 Eventually, the Avengers learned of this scheme and the true identity of the Ruul, which they revealed to the Galactic Council. Unfortunately, it was already too late. The Ruul had reclaimed the former Kree Empire from their Shi’ar masters and commenced a campaign of aggressive expansion. Fortunately, the heroes of Earth did manage to extract the Ego spore, cutting off the Ruul from their power source. Despite this, the Ruul retained their conventional energy sources and were still a force to be reckoned with, becoming one of the most powerful races in the universe once more. [Maximum Security crossover]

With the Supreme Intelligence leading them, the Ruul continued their aggressive expansion and immediately returned to war with the Shi’ar. They also forged an alliance with Blastaar of the Negative Zone. [Captain Marvel (4th series) 22-25]

In unexplained circumstances, the Ruul somehow devolved back into the Kree once more. Perhaps the effects of the Forever Crystal were temporary, or perhaps when a cosmically empowered Genis-Vell, son of Mar-Vell, destroyed and recreated the universe things this reversion was among the things changed. [Captain Marvel (5th series) #5-6] Either way, while the Kree had lost their new forms and abilities, they were still a powerful military and technological force.