Like most characters, Moon Knight did not come fully formed in his first appearance. Many of the most recognized attributes of his personality and backstory would come later, as creator Doug Moench and those who followed him fleshed out this “creation in progress.” 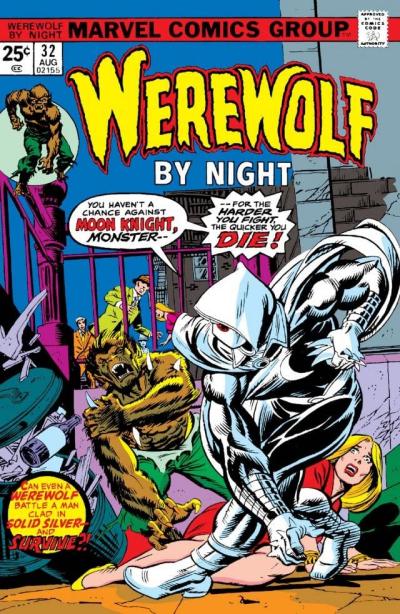 When Moon Knight first appeared in Werewolf by Night (1st series) #32, there was no backstory of his connection to the Egyptian god Khonshu and almost no sign of his heroic nature. To the contrary, Marc Spector was a cold mercenary, caring for nothing but money, and the very identity of Moon Knight seemed to have been created for him by the mysterious “Committee” who hired him. During the story, Moon Knight was basically a villain, meant to take down the title’s eponymous werewolf. However, it was only when he learned that the Werewolf by Night was the cursed and wretched human Jack Russell that mercenary Marc Spector showed his first sense of compassion, betraying the Committee who had hired him and freeing Russell.

After creating him for his story in Werewolf by Night, Doug Moench was given the chance to use his new character in a two-part story in the anthology series Marvel Spotlight (1st series) with #28 & 29. Although clearly only human, this story depicted Moon Knight as now having enhanced strength and stamina as a result of a scratch from the Werewolf. These powers would come out at night and the intensity of them would wax and wane with the moon’s cycles. This subplot did not survive long and was dropped early into Moon Knight’s first series a few years later.

In his first appearance in Werewolf by Night, Moon Knight’s aide-de-camp “Frenchie” had been introduced. Here in his second appearance in Marvel Spotlight, the character of Marlene Alraune followed. In addition to being his love interest, Marlene would be Moon Knight’s “Girl Friday” for most of his appearances in the years that followed. It was in this story in Marvel Spotlight that readers were gradually introduced to a more heroic character, along with the concept that he employed multiple cover identities, including millionaire Steven Grant and cabbie Jake Lockley. 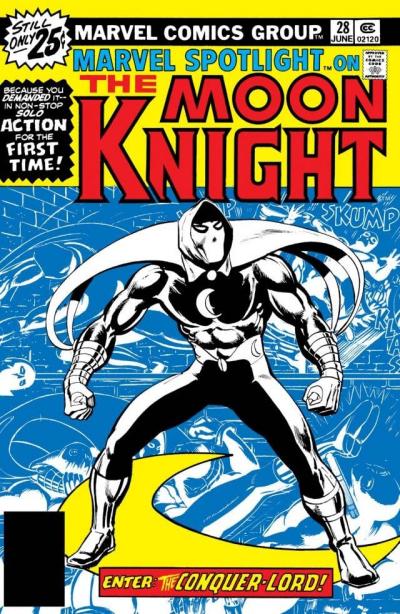 comparison between this new Marvel character and one of DC Comics’ oldest and most prominent: Batman. Both were non-powered, gadget wielding, cape-wearing heroes who easily funded their adventures because they were secretly millionaires. Even Moon Knight’s “street” identity of Jake Lockley was similar to Batman’s occasional street identity of “Matches Malone.”

Following this solo story, Moon Knight appeared as a supporting character in several series, including Defenders, Marvel Team-Up, Peter Parker, the Spectacular Spider-Man and a back-up story in Hulk! Magazine. In his regular appearances in backup stories of this series, readers were introduced to Marc Spector’s brother, Rand Spector. Not only did this give readers the first look into Marc Spector’s past and family but Rand would grow into his first reoccurring (if inconsistent) villain. It was probably due to the success of his back-up stories in the Hulk series that Doug Moench was given the opportunity to flesh out his character in his own title.