In the first issue of his new series, Moon Knight’s fans were given a full origin story, one which actually contradicted his first appearance. Rather than being given the identity of Moon Knight by the Committee, Marc Spector was given the identity and costume by the Egyptian good of the moon, Khonshu. In the story, Marc had had been working as a mercenary for a group of terrorists- 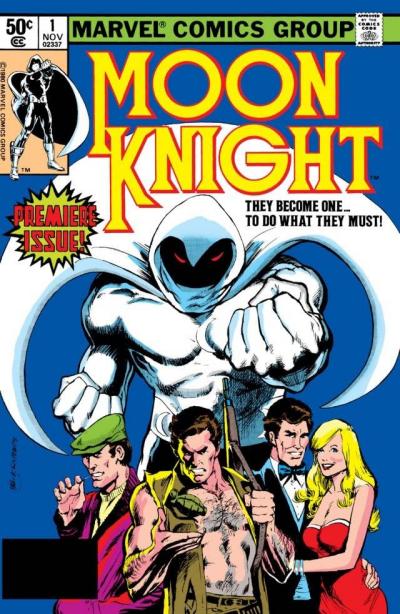 for-hire when he made the critical mistake of suffering a crisis of conscience. After escaping their wrath, Marc found his way into the tomb/temple of Khonshu, where he died – only to be resurrected by the Egyptian moon god. Inspired by the stoic statue of the deity and the vision he believed he received, Spector adopted the identity of Moon Knight to take vengeance the terrorists and their leader, Bushman, who would be Moon Knight’s archnemesis for most of his history. Likewise, this story set the stage for the ongoing theme of redemption for Marc Spector, continuously attempting to atone for the actions he carried out while a mercenary.

The story also detailed how Marc and Marlene met for the first time. To reconcile this new origin of the Moon Knight identity against his first appearance (in which the Moon Knight name and costume had been bestowed upon him by the Committee), issue #4 created a flashback scene in which Moon Knight’s aide Frenchie had approached the committee and suggested that they give Spector the costumed identity for their mission.

Other long-lasting aspects of the Moon Knight character were introduced in these early issues. Along with the recurring nemesis of the Midnight Man who was introduced with #3, the ongoing subplot of Marc Spector’s doubt regarding his own origin was introduced with #5. Had he really died and been resurrected? Was Khonshu real or merely a myth that had never existed? Readers were left to decide for themselves. In his earlier appearances, Marc Spector had made a point of requesting that his aides address him in the identity he had assumed for that moment. If he was millionaire Steven Grant, then he was Steven Grant. However the moment he adopted the attire of cabbie Jake Lockley, he was Jake Lockley. Spector’s girlfriend, Marlene, first bridled at such distinctions in #6 and the seeds were first laid for what later writers grew into Marc Spector’s dissociative identity disorder. 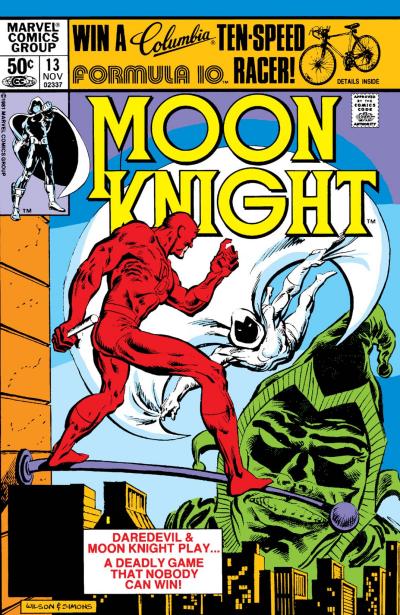 semi-nemesis of Stained Glass Scarlet, both of whom would trouble the mercenary-turned-hero in this series and ones to come. For the most part, the character of Moon Knight was not a traditional “Marvel super hero,” who fought other costumed villain. While he did have occasional such stories, such as teaming-up with Daredevil against the Jester in #13, his stories were usually less fantastic, dealing with street level crime, rogue mercenaries and the corruption of city officials. When dealing with the supernatural, Moon Knight was more likely to face the zombies and those who employed voodoo for nefarious ends. At the time of the first series’ publication, the United States was still reeling from the aftermath of both Watergate and the Vietnam War. Both were indirectly addressed with the introduction of another reoccurring villain of the ambitious yet mentally ill veteran Carson Knowles, who created the identity of the Black Spectre for personal political gain. Both Knowles and the identity of the Black Spectre would come back to haunt Moon Knight in the years to come.

Aside from guest writers with #16 and #27, Doug Moench had written the entire series depicting his creation so far. With #28, he began going back to the character’s roots, having circumstances lead him to return to the temple of Khonshu. There again, Marc Spector remained unsure as to the existence of the god. Issues #29-30 had Moon Knight reunite with Jack Russell, the Werewolf by Night. Issue #30 also marked the departure of artist Bill Sienkiewicz. Although he had not drawn as many issues as Doug Moench had written, Sienkiewicz had been on more far more issues than not, drawing #1-15, #17-20, #22-26 and #28-30. Just as the adventures of Moon 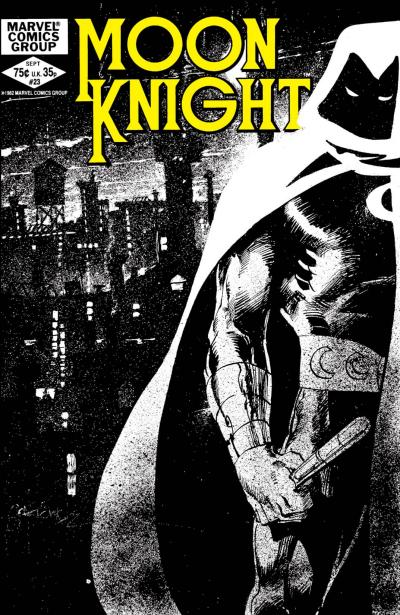 Knight had been less fantastic in the writing, Sienkiewicz’s art had been far less “cartoony” than a regular super-hero title. Issue #23 had marked a turning point in Sienkiewicz style, as the dream-like nature of the story allowed him to experiment with art as it pertained to Moon Knight’s perception. The result was a highly stylized, almost abstract art, with which Sienkiewicz continued to experiment during the remainder of his time with the title. After leaving Moon Knight with #30, Sienkiewicz went on to become the regular artist for the New Mutant series with #18, receiving critical acclaim as he further explored his style in the famous “Demon Bear Saga.”

After Moench’s departure, Tony Isabella took over writer chores, though only for the next two issues, #34-35. Although his first issue was a standard, street-level adventure, his second issue pitted Moon Knight against a costumed villain in the Human Fly and had both the X-Men and Fantastic Four making guest appearances. Issue #36 had a new writer in Alan Zelenetz, who would write the next three issues, which would be the series’ last. In his first issue, Zelenetz not only further cemented Moon Knight in the world of super heroes, having Doctor Strange guest star, but he also answered the question whether Khonshu was real, having Earth’s Sorcerer Supreme specifically confirm Moon Knight’s mystical nature. The last two issues of the series, #37-38, dealt with the death of Marc Spector’s father and a necromancer’s attempt to use the deceased Spector’s spirit for his own ends. Interestingly, a subplot of this story with his father revealed that Marc Spector grew up Jewish, making Moon Knight one of the first Marvel characters acknowledged as being Jewish.

After foiling the necromancer, Marc Spector realized he had come to a personal crossroads. His final conversation with Marlene could be interpreted as his coming to terms with parts of his past and personality. As with much of the series, readers were left with questions - this time whether Marc Spector would continue to be Moon Knight.

However, the concept of Moon Knight did not have long to lie fallow. The very next year, Moon Knight (2nd series) hit the stands. Above the logo of each issue, the subtitle of “Fist of Khonshu” appeared. When counting series numbers, it would be easy to count this as the specific name of the 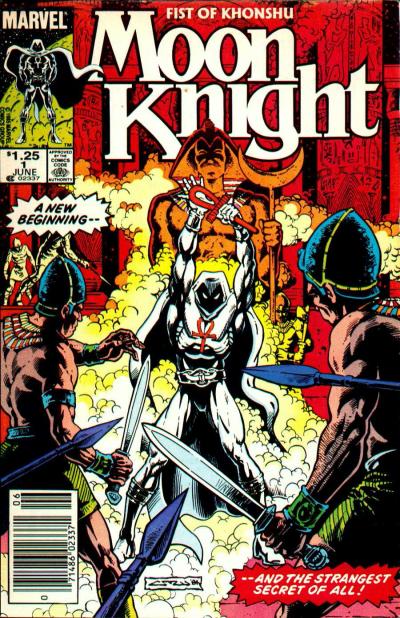 series, but the indicia of each issue only showed “Moon Knight” and specifically noted that it was “Vol 2.”

Although not specifically depicted as a miniseries, this series of Moon Knight only lasted six issues. The first four issues were written by Alan Zelenetz, who had written the final three issues of the previous series. The first issue was double-sized and made sure to be as reader friendly to newcomers as possible. Not only did the first five pages rehash his origin, but the rest of the issue brought Marc Spector back to the temple of Khonshu, where he met a trio of priests of Khonshu, who bestowed upon him new ceremonial weapons. Spector was reluctant to take up the mantle of Moon Knight again, as the story noted that the use of multiple identities had resulted in serious psychological stress on him. Nevertheless, by the end of the first issue, he had faced the threat of Anubis and had a personal vision bestowed upon him by Khonshu. Within one, double-sized story, Zelenetz had brought the character and title of Moon Knight back.

As with his first series, Moon Knight’s adventures were more “ground-based,” with no other costumed heroes of villains. After Zelenetz left with #4, the final two issues were written by two different writers. The first was Joe Duffy but the second and final one was Jim Owsley, whom most comic readers will know by the name of “Christopher Priest,” a nom de plume he adopted later. The series ended with issue #6.

Once again, the character of Moon Knight did not stay away from the pages of comics for long. The next year, writer Steven Englehart worked the “Fist of Khonshu” into his Avengers spinoff series, the West Coast Avengers. Englehart had been writing the WCA for almost a year and a half when he embarked on an audacious 8-part story, called “Lost in Space-Time,” which ran for

During this story and the rest of his run on the series, Englehart depicted Moon Knight’s relationship with Khonshu as being more personal, with the hero receiving instructions directly from the deity. In fact, it was Khonshu’s wish that Moon Knight become an Avenger in the first place. Another interesting retcon to the character’s origin was that, during his time in the past, Hawkeye had created the ceremonial weapons bestowed to Marc Spector in the beginning of his second series. Englehart also steered more directly into Marc Spector’s mental condition, having the character think of himself as being schizophrenic.

Although Moon Knight was given a guest bungalow right away and assisted the Avengers on multiple missions, it was not until #33 that official membership was offered and the fist of Khonshu became the “24th Avenger.” Shortly thereafter, a schism tore the Avengers in two when it was revealed that Mockingbird had allowed the villain known as the Phantom Rider to die in her rage following his sexual assault on her. When Mockingbird declared her intention to separate, Moon Knight was among those who followed her. During this time, Moon Knight was being depicted as being a direct avatar of Khonshu, meaning that it was not Marc Spector who was in control of the human body, but his patron deity. Issue #41 was both the last issue written by Steve Englehart and the last appearance of Moon Knight in the series. In this final issue, the storyline of Mockingbird and the Phantom Rider was more or less concluded and the Avengers were reunited. After this, Khonshu appeared before Marc Spector and relinquished control of his body back to the mortal. Now back in control of his own choices, Moon Knight voiced his desire to depart the team, as becoming an Avenger had always been the desire of Khonshu and not Marc Spector.