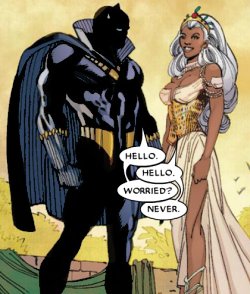 Ororo prepared for her wedding with the support of Sue Storm and her maid-of-honor, Kitty Pryde. The announcement of an American citizen marrying a foreign head of state would have been international news alone; adding the facts that one was a supremely powerful mutant and occasionally alleged terrorist and the other was the first public black superhero in America and once joined the Avengers just to spy on them and learn their weaknesses, well... the public and political reactions were extreme. Additionally, in the weeks leading up to the wedding, the American government enacted a Superhuman Registration Act, pitting the nation's heroes against one another in open conflict over the law. Despite this rather ominous backdrop, the wedding of Ororo and T'Challa was a relatively calm and beautiful occasion, celebrated by local and foreign citizens around the globe. In the ceremony, T'Challa brought Ororo before Bast, the Panther God, who stood in judgment of this potential queen and found Ororo an acceptable mate for her champion. [Black Panther (4th series) #18]

After a two week honeymoon on a tropical island prepared for them by Namor, Storm entered into the world of international diplomacy at her husband's side. The initial stages of their "world tour" brought the royal couple to Latveria, Attilan and Atlantis, and the discussion always turned towards America, and the potential international consequences of their Registration Act. Other nations feared what America would do after establishing a true superhuman army on behalf of their government. Hoping to defuse international tensions, T'Challa and Ororo requested a meeting with the President of the United States to discuss the Act. However, the President's staff refused to even meet with the royal couple until Storm signed the Registration Act. As a powered American citizen, they explained, Ororo might technically be considered in violation of the act if she did not. Refusing to be pressured into this decision, Storm and the Black Panther left without getting their meeting. A trigger-happy Sentinel pilot initiated a skirmish with the couple outside the White House where pro- and anti-registration demonstrators had gathered, prompting T'Challa and Storm to declare something must be done about the Act. [Black Panther (4th series) #19-22] 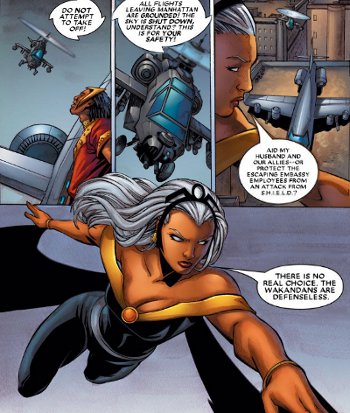 Ororo and T'Challa remained in New York at the Wakandan Embassy, hoping to appeal to the United Nations and foreign powers to put international pressure on America to discontinue their current path. Meanwhile, Wakanda began covertly providing support to Captain America and his "Secret Avengers," fighting as unregistered vigilantes in opposition to the Act. They overcame the security for the registered heroes' Negative Zone prison "42," freeing the detained combatants in a massive battle that carried over into the streets of New York. As the struggle raged, Ororo faced off against the cyborg clone of Thor created under the Registration Act. Although not a true god, the Thor clone's power was tremendous, and his lightning strikes destroyed the Wakandan Embassy as Storm fought to buy the staff time to evacuate. The people were saved, but the building was a complete loss. When Captain America surrendered in the wake of the heroes' battle, Ororo and T'Challa were left to continue their protests against the Superhuman Registration Act alone. [Black Panther (4th series) #23-25, Civil War (1st series) #6-7]

In the aftermath of the Superhuman Civil War, Reed Richards at least began to reconsider his role in the Registration Act. As he took a leave of absence from the Fantastic Four to repair his marriage, Reed offered Wakanda use of the Baxter Building to host their embassy in New York for the time being, and they accepted. In return, Storm and the Black Panther became interim members of the Fantastic Four while Reed and Sue were on holiday. Their short tenure with the group proved highly eventful, as they confronted threats such as Galactus, the Frightful Four and the Contrasepsis. The new Four also had a whirlwind series of adventures thanks to King Solomon's Frogs, touching upon the Negative Zone, the Skrulls and cosmic-powered zombies. [Fantastic Four (1st series) #544-550, Black Panther (4th series) #26-34] 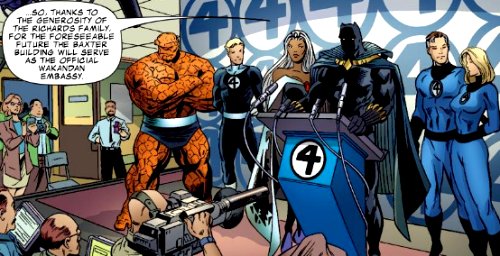 On a vacation from the Fantastic Four, Storm also reconnected with the X-Men during a conflict involving her former charges, the Morlocks. The Morlocks had split into two factions, led by Masque and Delphi, over interpretation of the prophetic scripture of one of their own, Qwerty.  A 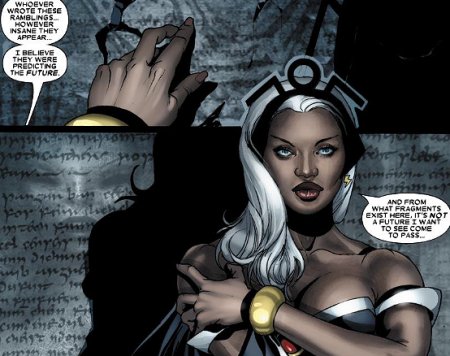 new wrinkle in the conflict between man and mutantkind was coming. However, while Delphi and her charges wanted to accept it passively, Masque planned a first strike in the name of mutant revolution. Storm joined forces with the X-Men and former Morlocks Caliban and Leech to stop the extremist faction, but they were unable to learn the details of the coming conflict before Qwerty's scripture was lost to them. [Uncanny X-Men (1st series) #487-491]

As a result, the X-Men were unprepared for the manifestation of the first new mutant since the Decimation. The future of mutantkind was rekindled, but the X-Men were caught in a war between multiple militant mutant and anti-mutant factions for control of the child. Storm led a strike team against Sinister's Marauders, and later fought in the final conflict on Muir Island. In the end, Professor Xavier was apparently killed, while Cyclops allowed Cable to escape into the future with the baby, keeping her safe until it was time to return her to the present. [Messiah CompleX crossover]

As the new Wakandan embassy was established away from the Baxter Building, and the X-Men temporarily disbanded in order to reassess the future of their race, Queen Ororo returned to Wakanda with her pupil, Nezhno. In the weeks that followed, an invasion force of Skrulls laid siege to the planet. The Skrulls had been infiltrating the nations and superhuman communities of Earth for months in anticipation of this strike. However, they greatly underestimated the 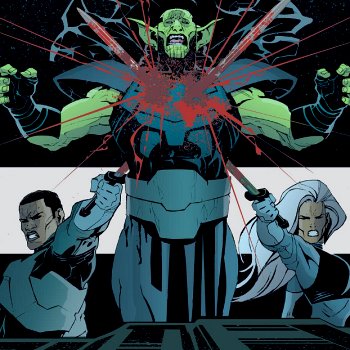 unconquered nation of Wakanda. His spiritual ties to the Panther God enabled T'Challa to see the souls of his people, and those of the infiltrators who WEREN'T of his people. The majority of Skrull infiltrators were rooted out and executed before the armada even arrived. T'Challa and Ororo knowingly allowed two infiltrators to remain seemingly undiscovered as Wakanda fought back against the Skrull ships and Super-Skrulls. When the last two infiltrators revealed themselves in time to betray the Wakandans, T'Challa and Ororo turned the tables on them and infiltrated the Skrull flagship themselves. The entire invasion force was destroyed, and Wakanda remained resolute against all invaders. [X-Men: Divided We Stand #1, Black Panther (4th series) #39-41] 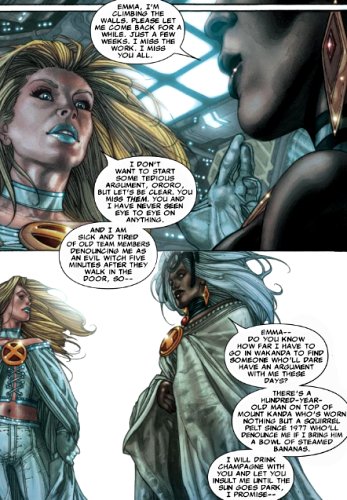 The X-Men soon reformed with a new base of operations in San Francisco, California. Now primarily funded by the humanitarian aid organization Mutantes sans Frontieres, Queen Ororo encouraged the Black Panther to donate heavily to the organization in exchange for increased aid to the people of Africa, and she in turn would take up an observational role in the group in order to monitor how their money was being spent... all of which was just a royal and political excuse for Storm to rejoin the X-Men on a regular basis. As engaging as life in the royal court was, Ororo was desperate to be back doing field work, reconnecting with her friends... and find people willing to argue with her. She was even willing to acknowledge Emma Frost's new leadership role with the team in order to once more be among her compatriots.

Although she was welcomed back with open arms, Storm soon realized the X-Men had changed since she was in charge. The old adage that "X-Men do not kill" was now a mild suggestion at best, if the alternative was to risk mutant lives or the future of the mutant race. With only a few hundred mutants left on the planet since M-Day, Cyclops was no longer playing games. Threats arose from unexpected angles, as Storm and the X-Men stumbled across a shadow war between invading mutants from another world and artificial mutants engineered on this one. Ororo was distraught to learn that her former lover Forge was responsible for the artificial "triploid" mutants, and his extreme efforts to defend the world from invaders was rooted in part in his feelings of rejection over her marriage to T'Challa. [Astonishing X-Men (3rd series) #25-30]

Despite the changes, Storm found herself settling back in with the X-Men, battling threats like Magneto, the Hellfire Cult and the Sisterhood. [Uncanny X-Men (1st series) #500-511] Still, her two worlds of responsibility continued to run into each other, a conflict her old nemesis the Shadow King was eager to exploit. Farouk used his powers to possess Nezhno, pushing him to murder a Wakandan shaman, which drew Ororo away from an X-Men mission when her advisors insisted on her return. When Storm recognized Nezhno as an innocent and ordered his release from custody, the Shadow King had already possessed the Black Panther to counter her. He used T'Challa to paint Storm as a traitor to Wakanda who put mutant interests before her subjects. Meanwhile, he secretly informed Storm he had also possessed Cyclops and sent him to murder the X-Men back in America. Ororo and Nezhno were forced to flee into the wilderness to avoid Wakanda's armed forces. 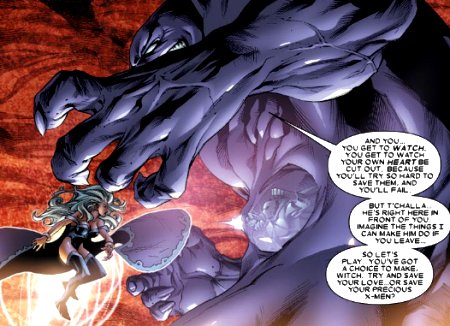 Storm and Nezhno made their way to the Panther Pavilion, where Ororo prayed to the Panther God and came before Bast in spiritual form to entreaty her aid. When the panthers of the Wakanda jungle emerged to protect Ororo from the Wakandan soldiers, the people knew their queen was still the chosen of the Panther God. T'Challa was sedated and secured while Storm and Nezhno raced across the world to stop Cyclops' assassination attempt. During the struggle with the Shadow King and his various possessed pawns, Storm tricked Farouk into trying to possess her directly. The telepath found Ororo's mind already occupied, and the Panther God expressed her displeasure at the Shadow King for manipulating her chosen champion by devouring his astral form whole. Bringing Nezhno back to San Francisco and the X-Men with her, this entire ordeal reaffirmed Storm's faith that she could maintain a foot in both her worlds and, if necessary, she could single-handedly save everyone she loved if they were threatened. [X-Men: Worlds Apart #1-4]