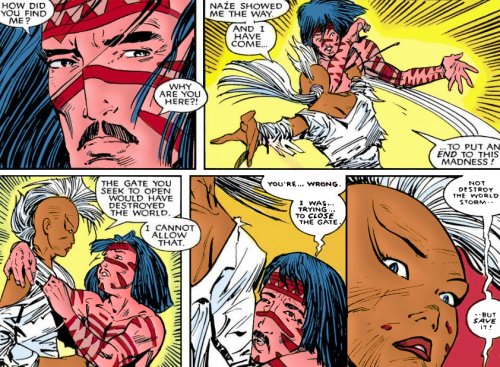 Storm felt that, especially under these circumstances, she needed her powers back. Swallowing her pride and naming Wolverine deputy leader in her absence, she went to Dallas to ask for Forge’s help. Instead, she found his home derelict and hints that Forge had gone mad. She encountered his old mentor Nazé, who told her that Forge – who was also a powerful, if reluctant, shaman – had probably been claimed by his nemesis, the Adversary, and would try to destroy the world in his name. Storm accompanied Nazé on a dangerous quest to find Forge, unaware of the fact that this wasn’t the true Nazé, but the Adversary in disguise. As Storm started to admit to herself that she still loved Forge, she also became more and more convinced that he had, in fact, gone evil, thanks to “Nazé’s” subtle manipulations. Eventually, she confronted Forge on a mountain, surrounded by demons, directing his power at a gate to another dimension. Convinced that he was trying to destroy the world, she stabbed him, only then realizing that he had in fact been trying to close the gate and save Earth. [Uncanny X-Men (1st series) #220-224]

While the Adversary then widened his control to the city of Dallas, Forge’s home, where time and space suddenly went crazy, Storm and the heavily injured Forge found themselves transported to another Earth, devoid of any human life. After spending a year there – most of it separate, as Storm journeyed to Africa to do a lot of soul-searching – they realized that the Adversary, even as he was preparing to destroy the other Earth, was giving them the chance to become parents to a new humanity on this world. Admitting their love for each other, they nevertheless decided that they had to try and save their own Earth. Forge had used their time apart to cannibalize the technology in his artificial leg to create an anti-Neutralizer. With her powers restored, Storm used her lightning to energize a portal back to Earth. At first, Ororo was unsure, as she feared that

having her powers back would turn her into the unreachable, untouchable “goddess” she was before, but Forge supported her by telling that then she wouldn’t have learned anything during the past years. With her mutant abilities reactivated, the couple traveled home. It turned out, however, that the only way to defeat the Adversary was a certain magical spell to counter the one Forge cast many years ago, which had freed the Adversary in the first place. As it needed nine souls to give it energy, the X-Men and their companion Madelyne Pryor, on live TV, sacrificed themselves for Forge’s spell to banish the Adversary. However, while the world believed the X-Men dead, they were secretly returned to life by Roma, Omniversal ruler. [Uncanny X-Men (1st series) #225-227]

The X-Men decided to follow Storm’s earlier plan and let everybody believe they were dead, in order to better strike back at their enemies. They found a new base in the former hideout of the Reavers, an abandoned town hidden away in the Australian Outback. Their new ally, Gateway, allowed the X-Men to teleport anywhere in the world while remaining off the grid. While some of the other members missed their friends and loved ones, who did not know of the X-Men being still alive, Storm got the chance to reacquaint herself with her foster mother, M’rin, during a trip to the Savage Land. [Uncanny X-Men Annual (1st series) #12] Thanks to Gateway's teleporting ability, Ororo was also able to spend time in Harlem, getting to know the neighborhood where she was born. Incognito, Ororo was nicknamed "Blue" for her eyes by a local activist, Ezra Klein. She became close with Ezra and his grown children while getting in touch with her roots. [Black Panther and the Crew #1-2]

Some time later, during the Inferno event, the X-Men found themselves face to face with X-Factor for the first time, among them Jean Grey, whom they had believed to be dead. Jean and her team likewise had thought the X-Men were no longer among the living, after the events of Dallas had been broadcasted on TV. The first tension was soon overcome and Storm found herself happily reunited with her best friend. 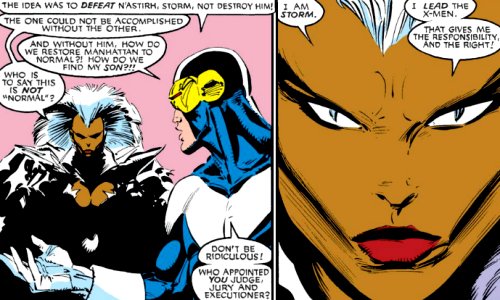 When Storm destroyed the demon N’astirh, by overloading his circuitry with her lightning, this also showed the great differences between Cyclops and Storm’s teams. Cyclops clung more to the ethics taught to them by Xavier, whereas Storm wanted to get the job done, no matter what means necessary. [Uncanny X-Men (1st series) #242] 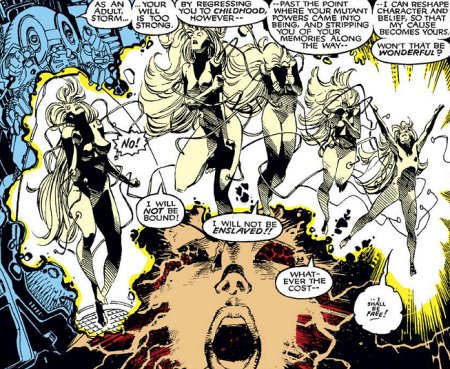 Back at their headquarters in the Australian Outback, the X-Men were attacked by the psychotic Nanny and her charge, the Orphan Maker, in a perverse attempt to "save" them from themselves. Nanny captured Storm and faked her death to her teammates with the help of a S.H.I.E.L.D. life model decoy, which resembled Ororo and was found by the X-Men in the wreckage of Nanny’s ship. The villains, though, had escaped with their captive in a second ship and, once back in their base, Nanny physically and mentally reduced Storm to her pre-teens to better control her. However, Storm’s claustrophobia gave her the strength to overload Nanny’s systems and escape from her containment device. [Uncanny X-Men (1st series) #248, 267] 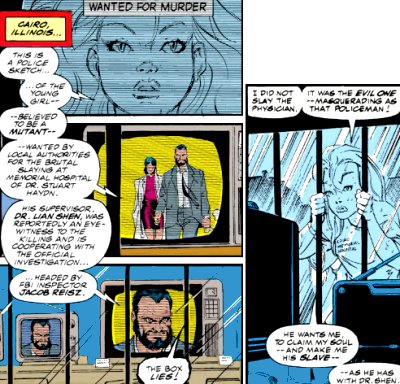 The now approximately 11-12 year old Ororo found herself in the city of Cairo, Illinois. She had no memories of her time with the X-Men or even why she was in America. Her powers hardly worked either, due to her youth. The Shadow King had resurfaced since his battle with Storm and the New Mutants. He took this opportunity to once more hunt her. Taking over the body of FBI agent Jacob Reisz, the Shadow King framed young Ororo for murder. [Uncanny X-Men (1st series) #253, 255, 257] 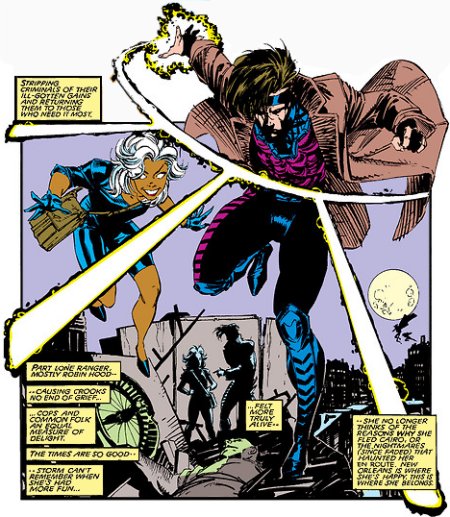 Ororo hid and once more returned to her thieving ways. During one of her capers, the Shadow King had his agents waiting for her. Luckily, she was saved thanks to the intervention of a fellow mutant and thief named Gambit. He became intrigued by the young girl and they formed a partnership, playing Robin Hood, stealing from the rich and giving to the poor. Eventually, they were found again by Nanny. They managed to beat her and destroy her aircraft, but the encounter reactivated Storm’s memories of what had happened to her and who she had been. [Uncanny X-Men (1st series) #265-267]

Together, she and Gambit traveled to the X-Mansion, where they were reunited with Banshee and Forge, who had begun to search for the missing X-Men, as well as with the New Mutants under Cable’s leadership, and X-Factor. [Uncanny X-Men Annual (1st series) #14] Excessive tests and examinations revealed that Nanny not only had reduced her to a teenager, but Ororo was stuck in this form – she did not grow or age and, as such, she could not fully develop her powers.