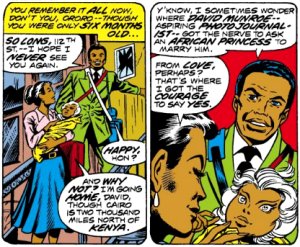 Born in New York City, Ororo Munroe is the daughter of David and N’Dare Munroe. Dating back thousands of years, women from Ororo’s maternal bloodline have occasionally developed white hair and blue eyes, in contrast to their dark features, along with exceptional magical potential. This may even include the ancient Sorceress Supreme, Ayesha. Ororo’s appearance makes her the spitting image of the warrior sorceresses of the past, including her ancestor Ashake of ancient Egypt. [New Mutants (1st series) #32, Marvel Tarot #1]

David Munroe fell in love with Africa during a childhood visit to the land with his mother and Malcolm X, and enrolled in the University of Kenya as a young photography student. There he met and later married a beautiful Kenyan princess named N’Dare. [Black Panther (4th series) #14] They moved to David’s home in America, and were living in Harlem in New York City when their daughter Ororo was born. [X-Men (1st series) #122] The racial strife in America proved to be too unsettling for N’Dare, however. She missed her homeland and begged David not to let their daughter grow up surrounded by such hatred. David soon agreed to take a job as a photo-journalist in Cairo, and the family relocated to Egypt when Ororo was six months old. [Storm (2nd series) #1] Ororo and her parents spent six years living together happily in Cairo. In her earliest childhood, N’Dare showed her daughter a special ruby-crystal cameo that had been in their family for generations. [X-Treme X-Men (1st series) #10]

During a local conflict when Ororo was around six years old, a plane crashed into the Munroes’ house. Her parents died, while Ororo was trapped besides her dead mother in the rubble for hours. This trauma resulted in a severe case of claustrophobia that Ororo suffers from even in the present day. Somehow, the child managed to dig herself out, taking nothing but her mother’s ruby with her. 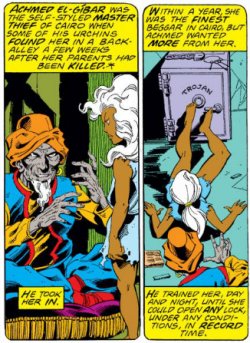 Alone in the city, Ororo was eventually found by some street urchins who brought her to their master, Achmed el-Gibar, the greatest thief in all of Cairo, who gave children a home and trained them as thieves. Within a year, Ororo was trained to be a beggar. Within another, she became an excellent pickpocket and thief, and el-Gibar’s star pupil. [X-Men (1st series) #102, 113, Storm (2nd series) #2]

During that time, Ororo picked the pocket of an American tourist, one Charles Xavier. The telepath noticed what a normal tourist would not, and used his powers to stop her in her tracks and retrieve his wallet. However, at that moment, Xavier was mentally attacked by Amahl Farouk, a local crime lord who had his own plans for Ororo. Xavier's attention was diverted by the conflict that followed with Farouk, and the child escaped. [X-Men (1st series) #117]

Itching to prove her skills as a thief, Ororo once stole a rare ruby-colored gem, the so-called “Heart of Eternal Darkness.” She did so against Achmed el-Gibar’s direct orders. Only later, it would be discovered that the stone contained the essence of the immortal mutant Candra. [X-Men (2nd series) #60] On another occasion, Ororo and her fellow thieves Nari and Hakiim were hired through el-Gibar by the mysterious Mr. Barrett to infiltrate a tomb. Barrett wanted them to retrieve the Opal of Ozymandias from a recent dig site, said to contain some of the ancient power of En Sabah Nur. Ororo and her friends managed to brave the booby traps and reach the center of the tomb, only to be confronted by the immortal Ozymandias himself. The street urchins fought vainly against Ozymandias’ stone avatars, until the Eternal One’s servant recognized Ororo as one of the fabled Twelve from his own visions. Ozymandias allowed Ororo to leave with the Opal, but the young thieves were betrayed by Barrett as soon as they exited the tomb. Barrett was a mutant who wanted to claim the power and the glory of the Apocalypse for himself through the gem, and tried to bury the urchins in a cave-in. Asking the Bright Lady for help, Ororo unwittingly tapped into her developing mutant powers to clear the stones and free her and Hakiim. Together they freed el-Gibar and the other thieves from Barrett, and watched as their treacherous employer used the gem, only to be transformed into lifeless stone for his efforts. [Ororo: Before the Storm #1-4] 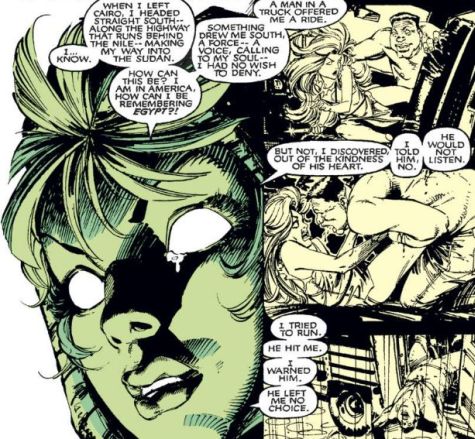 When she was about twelve, Ororo felt the irresistible urge to wander southwards and left Cairo. During that trip, she naively trusted a man who offered her a ride and was almost raped. Ororo fought back and killed him with her knife. As a result of this traumatic event, she swore never to take another human life. Along the journey, she discovered her emerging power to control the weather. Fearful of this “curse,” Ororo tried to suppress her powers as best she could. [Uncanny X-Men (1st series) #102, 267]

Her travels led her to the camp of a man named Teacher, a friend of Achmed el-Gibar who ran his own group of child thieves in the woods outside a small village. Ororo continued to perfect her skills as a lockpick with Teacher, but she was no longer comfortable stealing in order to survive. Instead, she primarily stole things that reminded her of her parents, and the life she had before they died. One day, she stole a camera that reminded her of her father from Claude de Ruyter, a poacher from South Africa. She was nearly caught by de Ruyter's men, and instinctively summoned a storm for protection. This allowed her to escape, but also made de Ruyter determined to find this "wind-rider" and profit from her. [Storm (2nd series) #1]

When de Ruyter and his men came for her in the woods, Ororo tried to escape with her powers, but was brought down from the sky by a tranquilizer dart. She was saved by the young Prince 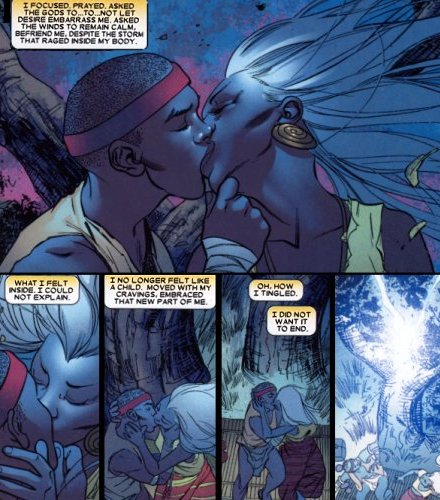 T’Challa of Wakanda, who was on walkabout from his kingdom and saw the earlier encounter with de Ruyter in the village. He brought her back to Teacher's camp to recover. Ororo and T'Challa were immediately taken with each other, and began spending time together. Nervous about her feelings towards T'Challa and her growing powers, Ororo nearly split a tree in half with a lightning bolt when the two of them shared a kiss. T’Challa helped Ororo gain confidence in her powers, however, and exert control over them. On a private picnic in the jungle, Ororo made love for the first time with the young prince. [Storm (2nd series) #2-4]

Claude de Ruyter had regrouped, however, and recruited the assistance of his brother, the massive fighter called Andreas "The Bull" de Ruyter. The Bull had been humiliated years ago by T'Challa's father while trying to invade Wakanda, and wanted revenge. Teacher was killed and his camp was destroyed by the de Ruyters' men. Ororo was captured and placed inside a Vibranium coffin to control her powers, but she got free and caused the Bull's helicopter to crash. The winds saved Ororo and T'Challa from the fall, but Andreas's back was broken by the impact. [Storm (2nd series) #5-6]

[NOTE: The Storm limited series, produced in anticipation of the wedding of Storm and the Black Panther, significantly altered and expanded upon the original story of their first meeting from Marvel Team-Up (1st series) #100. In that issue, Teacher and his camp of thieves did not exist. Ororo, traveling alone, came across de Ruyter's men attempting to kidnap T'Challa to gain influence over Wakanda. Using powers she already had decent control over, Ororo helped T'Challa escape.]

Ororo and her prince traveled together for some time. While they had strong feelings towards one another, T’Challa’s duty to Wakanda and Ororo’s dream of Kenya pulled them in different directions. [Marvel Team-Up (1st series) #100, Black Panther (3rd series) #26] 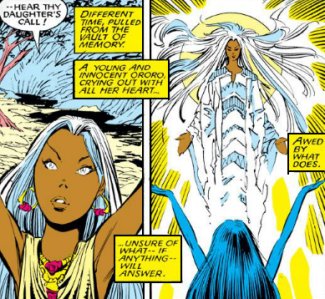 Eventually, Ororo arrived on the Serengeti Plain in Kenya and made her home there. There, she called out to her goddess and was answered with the sight of a shining figure of a woman, who resembled her. [Uncanny X-Men (1st series) #226]

Ororo herself was adopted as a goddess of life by the local tribes, whom she helped, however she could, with her powers. However, she discovered that the weather reacted to her emotional state thus, to protect the people around her, she detached herself from stronger emotions as far as possible. Ororo also found a substitute mother in the elderly tribal woman, Ainet, who helped her learn how to responsibly use her complex powers. [X-Men (2nd series) #76-77] 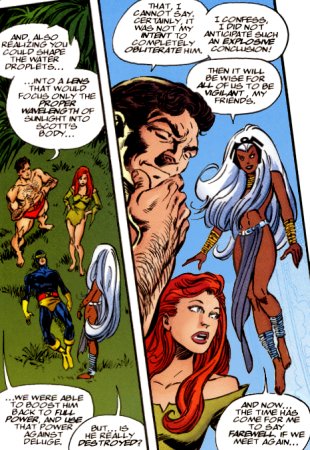 Years later, a threat arose as a fellow mutant who called himself Deluge had wrested control over the weather from her in an attempt to revenge himself on humanity. With the help of several of the original X-Men, who were stranded in Kenya, Ororo managed to destroy Deluge and disperse the storm. After she had departed back to her tribe, the X-Men wanted to inform Xavier about this promising mutant. He informed the group that he already knew about her, but didn’t want to contact her because he thought the cultural shock would be too much for her to handle, at least at this time. [X-Men: The Hidden Years #5-7, Uncanny X-Men (1st series) #300]