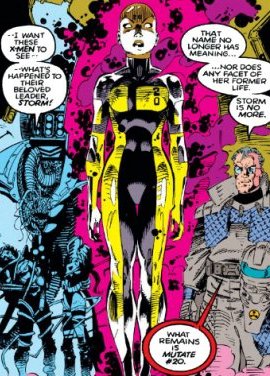 Sometime later, Storm and several New Mutants were kidnapped by Genoshan agents - Genosha was a country that lived off the slave labor of mutants and had made enemies of the X-Men. At that point, the Genoshan government worked together with the old X-Factor enemy, Cameron Hodge, to destroy the various X-Teams as revenge for an earlier defeat by them. The attack grew into a political conflict and the world learned the X-Men had not been slain in Dallas, as they had thought.

In custody, Storm seemingly underwent the conditioning process that the Genoshan Genegineer had developed to turn mutants or mutates into obedient, mindless slaves. Ororo’s head was shaved, she was stripped of any free will and was called Mutate #20. [Uncanny X-Men (1st series) #270-271] 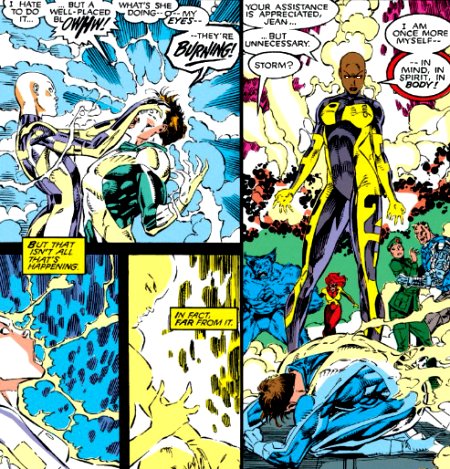 However, Genegineer Moreau and Chief Magistrate Anderson were among the faction working against Hodge and intended to use Storm in a Trojan Horse gambit against him. When Storm attacked Cyclops on Anderson’s orders, Storm not only regained both her faculties and her adult body, she also was given the means to reactivate the neutralized powers of the other captured X-Men. Storm reassumed leadership of the X-Men alongside several old and new friends, including Forge who joined the X-Men officially to be with her. [Uncanny X-Men (1st series) #272]

After having an adventure in Shi'ar space, the X-Men returned to Earth with Professor Xavier. It was discovered that the Shadow King had taken over the minds of the residents of the Muir Island Research Facility in their absence. Most of the X-Men were captured by the residents when they tried to stop the Shadow King and so Professor Xavier enlisted the help of both X-Factor and S.H.I.E.L.D. After the villain was defeated, the original five X-Men rejoined the fold. The X-Men were reorganized with Cyclops and Storm becoming leader of one X-Men squad each. Storm was leader of the so-called Gold Team. [Muir Island Saga, X-Men (2nd series) #1] 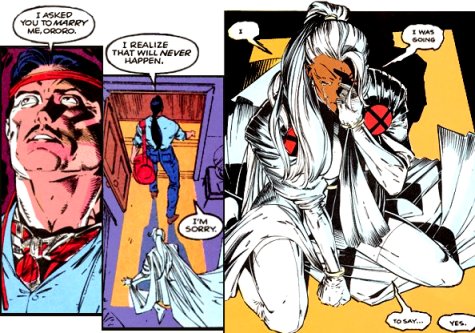 Storm's responsibilities to the Gold Strike Force left little time for her relationship with Forge. The Maker was officially an X-Man, but serving in a support role at the mansion instead of as an active field participant. Storm had been too busy with her job to ever find time for her lover, who recognized how distant she had become. Forge proposed to Storm, but Ororo hesitated. As Jean Grey refused to tell Forge about Storm’s true feelings, Forge became convinced that Storm didn’t love him and could never be a complete person outside the X-Men. Therefore, he retracted his proposal and left to help Mystique, who seemed to be on the verge of losing her mind at the time, and therefore "needed" him. Ironically, Storm would have said “yes.” [Uncanny X-Men (1st series) #289-290]

Some time later, Storm’s leadership of the few remaining Morlocks was once more called into question when the Morlocks, possessed by one of their own, went berserk. Masque had been killed and Callisto driven mad, leaving the Morlocks without guidance. The X-Men were able 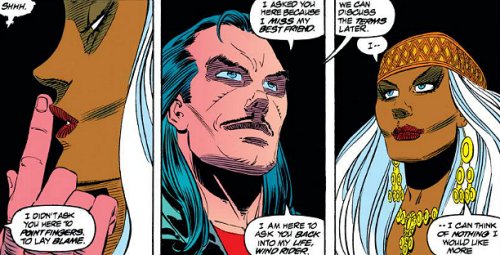 to get the situation temporarily under control. However, Colossus’ mad brother, Mikhail Rasputin, assumed leadership of the underground community. His first decision was to destroy the tunnel wall, flooding the Alley and all connected tunnels, apparently killing himself, Callisto and all Morlocks. [Uncanny X-Men (1st series) #291-293]

Shortly after he learned that Mystique had only been faking her mental problems, Forge invited Storm to dinner. They realized that they both had been partially to blame for their troubled relationship and made up again. Even if they couldn’t fully resume their relationship, as he now was X-Factor’s governmental liaison and as busy as Storm, they remained more than friends. [Uncanny X-Men (1st series) #306] 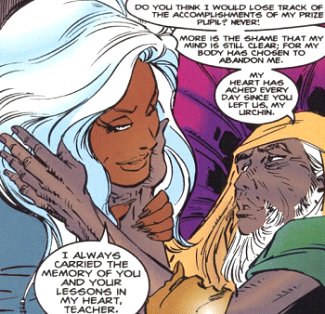 With her old mentor, Achmed-El Gibar, lying on his deathbed, Storm traveled to Cairo to be with him in his last hours. One of his pupils, a mutant boy named Jamil, had fallen under the influence of the evil immortal mutant Candra. Storm and her friends confronted Candra and managed to at least save another of Achmed’s charges – Karima, but Jamil chose to stay with Candra. Storm promised her dying teacher to help the children and she appointed Karima the new leader, sharing Achmed’s secrets with her. Her intervention, however, had earned Storm a new adversary in Candra. [X-Men Unlimited (1st series) #7] 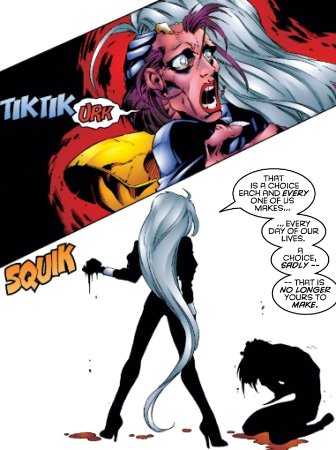 Storm learned that the news of the death of the Morlocks had been premature – actually Mikhail had transported them to another harsh dimension, where time passed faster. Children had grown up in the time, since the X-Men saw them last, and some of them calling themselves Gene Nation – under the leadership of a teenage girl named Marrow – wanted revenge on the humans who had shunned the Morlocks. They planned another massacre on the Anniversary of the Morlock Massacre. Storm confronted Marrow, who had put a bomb into her heart with which she intended to kill their human hostages. Ororo faced the girl in single combat as she once did Callisto, and cut out her heart before the bomb could explode. [Uncanny X-Men (1st series) #322-325] 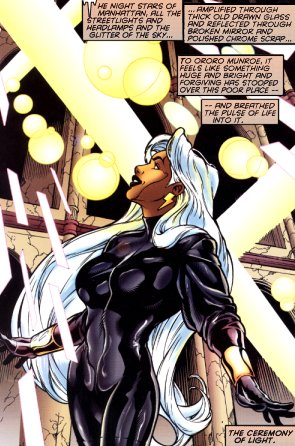 Unaware of the fact that Marrow had survived, as she actually had two hearts, Storm was deeply troubled by that decision. She also felt that her entire life consisted only of short-term solutions and that she was incapable of making long-term decisions that worked. Remembering the Morlocks and how she failed them, she decided to celebrate the Ceremony of Light as a remembrance ritual in the Morlock Tunnels, only to be teleported away.

Mikhail Rasputin, who had become a completely insane, Darwinian despot, faked Storm’s death and transported her to his other dimension, where she was to become “mother” to the Morlocks, just as he considered himself their father. Storm learned that Rasputin actually backed Gene Nation. Eventually, she forced him to return all the surviving Morlocks back to Earth and gave the Gene Nation members a choice. She’d transport them to the African village she had been to on her travels while she was powerless. The village had become impoverished through neglect and they could help to rebuild it – or else. [Storm (1st series) #1-4] 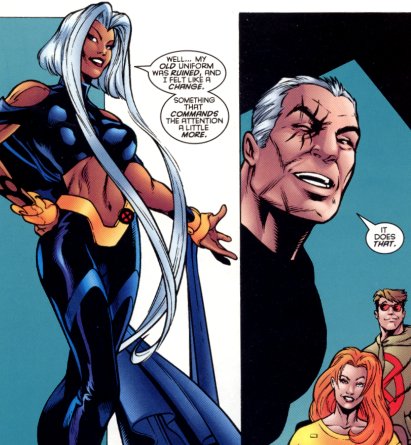 Newly energized, Storm presented a new look to her teammates. During that time Storm also called off her on-again-off again relationship with Forge for good, since she couldn’t imagine a long-term future with him and started a subtle flirtation with Cable instead.

Storm once more confronted Candra – who had by now learned that Storm had stolen her "heart" jewel as a child – over the fate of the children Jamil and Karima. After facing several old foes and friends who couldn’t possibly be there, Storm realized that Karima was a powerful mutant with the ability to make desires real and that Jamil was only an expression of her own desires. When Cyclops destroyed the ruby that contained Candra’s essence, Storm’s opponent perished and Ororo returned Karima home. [X-Men (2nd series) #60-61]