This page deals with the divergent version of KANG-PRIME who remained in Limbo and became involved with the COUNCIL of CROSS-TIME KANGS.

Somewhat addled and confused by the experience, Kang escaped into a temporal pocket until his opponents were gone before returning to the shattered remains of his lair. He soon found himself 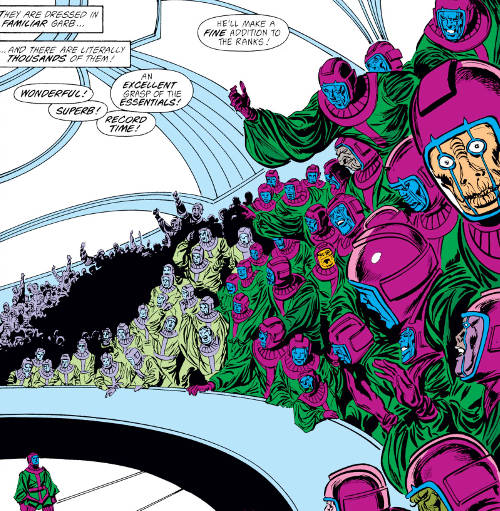 confronted by two individuals wearing armor identical to his own. Kang defeated the impetuous child "Kanglet" but fell victim to an attack by the female Kang Nebula. He was transported against his will to an eerily familiar council chamber, and found himself in the presence of the Council of Cross-Time Kangs. [Avengers (1st series) #291-292]

As Kang was nominated for membership in the Council, he was uncharacteristically agreeable about becoming a mere cog in such a large machine, presumably to first gain a better 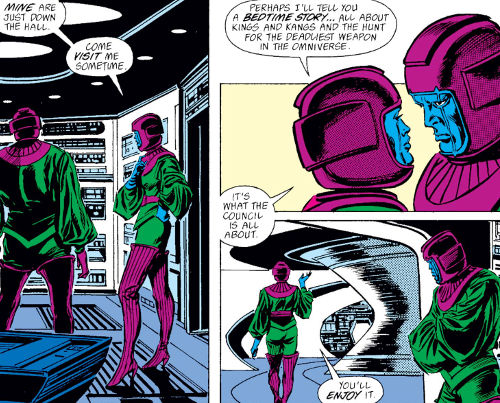 understanding of the Council's methods and capabilities. Kang Nebula acted as Kang's personal guide in the Council's chambers, attempting to draw his affections. Instead, she drew his suspicions. Kang monitored Nebula remotely using his armor's equipment, and found her making sojourns to Avengers-era Earth, apparently interacting with his mortal foes. [Avengers (1st series) #293-294] 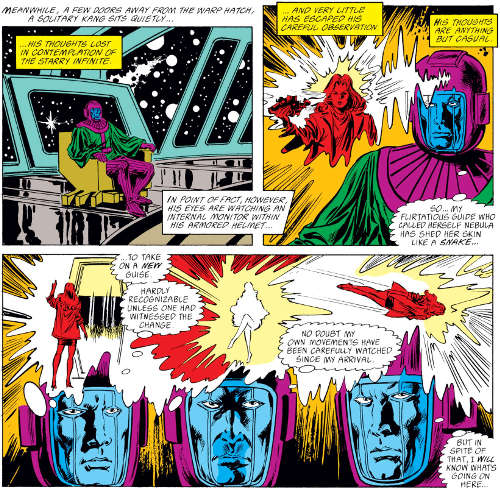 Kang brought Nebula's actions to the attention of the Council's Kang Chairman. The Chairman and several Kangs raided Nebula's quarters, finding various examples of technologies from other Kangs' realities. It soon became clear Kang Nebula had seduced many Kangs on the Council to gain access to the unique technology of their various realms, gathering an advanced array of gadgets. Even worse, Nebula intended to use her acquisitions to beat the Council of Cross-Time Kangs to the Ultimate Weapon, seizing its power for herself. [Avengers (1st series) #295]

The Ultimate Weapon was a mysterious power located fifteen years in the Avengers' future. A Time Bubble 20 years across sealed that period of time off from all forms of outside temporal incursion, making it nigh-impossible to time travel to the Weapon's period of existence. The Council of Cross-Time Kangs had learned the Weapon was derived from the Dreaming Celestial of Earth, and coveted its power. While the Council planned to wait until the "time" was right to 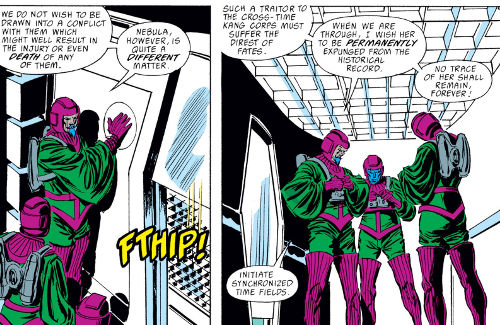 pass naturally into the bubble, Kang Nebula believed she had uncovered the means to enter the bubble prematurely and seize the Weapon before the rest of the Council could act. Scans of the bubble's temporal field indicated the Avengers were apparently responsible for penetrating the Bubble, and Kang Nebula intended to engineer that prediction for her own purposes.

Kang-Prime, the Chairman Kang and the Kang of Mesozoic-24 attempted to intercept Nebula, but failed to arrive on Earth before she mentally enslaved the Avengers and rigged one of their Quinjets for temporal travel. The Kangs followed in Nebula's wake, hoping to seize the Weapon before she did, or at least keep it out of her hands. As the improbability chaos surrounding the Time Bubble made prolonged combat between the Kangs and Nebula impossible, Kang resorted to neutralizing the mindbenders Nebula had used on the Avengers. When the Avengers regained control of their senses, they tossed Nebula into the temporal wave outside their ship before aborting their attempt to penetrate the bubble and returning home. Kang was also caught in the temporal chaos, however, left in a phantasmal state as the probability wave surrounding the Time Bubble caused him to phase in and out of existence. [Avengers (1st series) #296-297]

During one of the periods of probability where Kang continued to exist, he probed the timestream and observed the demon night in Manhattan known as Inferno. As the demons of Limbo reigned over Earth in an increasing number of alternate timelines, Kang realized they were successful in 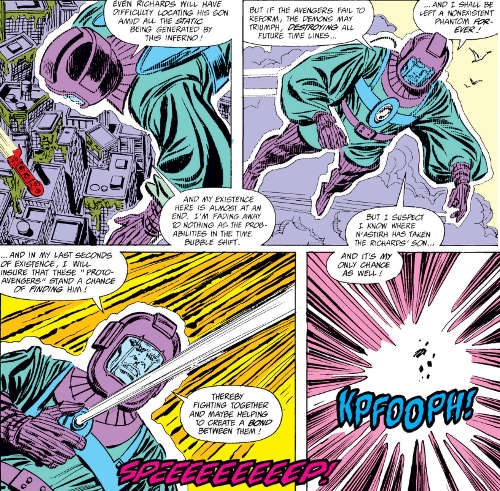 part because the Avengers had disbanded after the Time Bubble incident with Nebula. With some consideration, Kang recognized that the Council's prediction of a successful incursion by the Avengers into the Time Bubble was his only chance to escape the improbability zone he was trapped in. Consequently, the Avengers must be reformed in order to stop Inferno and eventually return to the Time Bubble. Before he phased back out of existence, Kang sent his Growing Man stimuloid to Earth. The Growing Man acted as bait, luring several loosely associated heroes to Nastirh's lair and allowing them to rescue Franklin Richards, before his incalculable mutant energies could be used to further the demons' plans. These heroes, including Captain America, Thor and Reed and Sue Richards did remain together as a new team of Avengers. [Avengers (1st series) #300]

Months later, Earth-time, Reed Richards of the Fantastic Four examined the Time Bubble after reading about it in the Avengers' files. He forecast that the bubble was expanding outwards, consuming time beyond 20 years in the future. Fearing for the future as a whole, the Fantastic Four resolved to explore the Time Bubble and brought their allies Thor and Iron Man along on their time-sled for the journey. (It was the presence of these heroes on the trek which misled the Cross-Time Kangs and Nebula into believing it was the Avengers, not the Fantastic Four, who were actually successful in penetrating the bubble.)

As they traveled 20 years into the future and pierced the Time Bubble, the Fantastic Four unwittingly made contact with Nebula in the temporal distortion area. Nebula used her resources to reach out and psychically possess the Human Torch as they completed the journey through the Bubble. This journey allowed Kang-Prime and his two allies from the Council to phase back into existence. When the FF passed through the bubble and materialized in the near-future, the Kangs arrived with them. As the Kangs attempted to access the Ultimate Weapon, their shields were damaged by the Four's ally, Death's Head, using technology from the Time Variance Authority. With his force field down, Kang was vulnerable to conventional assault. Taking advantage of the situation, Nebula used the Torch's nova flame to murder Kang-Prime before he regained control of his armor. Kang died unaware that Kang Nebula was behind the Human Torch's attack, and indeed, unaware of Kang Nebula's shocking true identity. [Fantastic Four (1st series) #338]