This page deals with the Kang who became "KANG-PRIME" and formed the Council of Kangs with two of his more respected counterparts. For the purposes of this article, they have been designated Kang-Two and Kang-Three, either of which might be any (or none) of the Kangs depicted in the previous page.

Kang mourned Ravonna for years, and was unable to reclaim his zest for conquest in her absence. His circumstances changed radically after responding to a distress beacon by his stimuloid, the Growing Man. Having planned for all eventualities, Kang reasoned that his enemies might one day threaten him so that he could not access his time travel technology. To compensate, he traveled into the distant past and buried his stimuloid servitor, a "time capsule" he could call upon in any time period without having to time-jump to get it. However, an excavation in modern America accidentally uncovered the Growing Man. The stimuloid ran amok without direct orders from Kang to control it, and the Conqueror traveled back to the Heroic Age to retrieve his

creation. In the process, Kang and the Growing Man fought the Mighty Thor. When Kang tried to escape in his time-ship, the Thunder God cast an infinity vortex around the craft using Mjolnir's own time travel ability. [Thor (1st series) #140]

Kang was cast adrift in Limbo as a result of Thor's interference, unable to return to the normal timestream. He wandered the timeless realm for what seemed like eternity before he came across the citadel of Immortus. Kang found the skeletal remains of the Lord of Limbo, and claimed 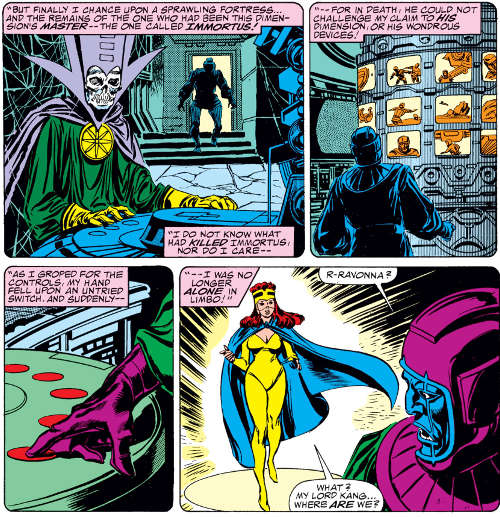 Immortus' home and technology for himself. While using the dimensional viewer, he saw the moment in time when Ravonna sacrificed herself for him. Groping at the controls, Kang accidentally summoned Ravonna out of time and into Limbo, saving his love from her fate. Although Kang and Ravonna were joyfully reunited in Limbo, Kang was also haunted by the consequences of his actions: by pulling Ravonna out of time, Baltag's blast succeeded in reaching Kang. Kang had inadvertently created a divergence in time that caused his own death.

Drawn to study the phenomena further, Kang used Immortus' equipment to track countless divergent versions of himself in the timestream. Kang learned that a new doppelganger was created for every major action he took, particularly those involving time travel. Unfortunately, many of these Kangs proved to be fools unworthy of the title of conqueror in the eyes of "Kang-Prime." Seeing an opportunity, Kang-Prime decided to prune the tree of time of all of his divergent selves. By transporting his doppelgangers into Limbo, Kang-Prime learned he could eliminate them without creating further divergences in the timestream. He also created a robot manufacturing plant inside the citadel. By producing android copies of himself, Kang-Prime secretly seized control of the empires of every divergent Kang he killed, ruling them by proxy.

Recognizing that some doppelgangers were more cunning than others, Kang-Prime recruited two of his most seasoned "brothers" to join him in a Council of Kangs. (It seems likely that one or both of these Kangs represent the Kang seen in the Grandmaster gambit, the Celestial Madonna Saga, the Wild West adventure, and other appearances by Kang after Kang-Prime diverged. Indeed, 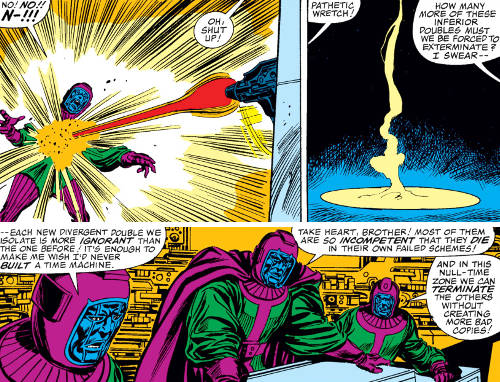 Kang-Prime remarked that one of his counterparts was actually decades older than him.) Kang-Prime convinced them of the basic idea of eliminating those fools unworthy of the name Kang, and the triumvirate sat in judgment of their doppelgangers from the council chambers inside Kang-Prime's citadel. Kang-Prime kept his brothers in the dark when it came to the full scope of his plans, however, leaving them unawares of his robotic replacements or even the true location of the citadel.

After thousands of executions, the Council of Kangs was eventually successful in killing all the divergent counterparts except for the three of them, a fact that Kang-Prime concealed from his "brothers." Kang-Prime then baited a trap to eliminate his fellow Councilmen as well. Kang-Three believed he had found a way to return to Kang-Prime's citadel without being noticed, but Kang-Prime registered his arrival within moments and had his counterpart killed by some hidden weaponry. Down to his last doppelganger, Kang-Prime arranged to pit the Avengers against Kang-Two, leaving him free to eliminate whoever was the victor.

Kang-Prime transported the Avengers from their mansion into Limbo. Once there, he goaded them into action with taunting holograms and robot doubles, while also directing Dire Wraiths by 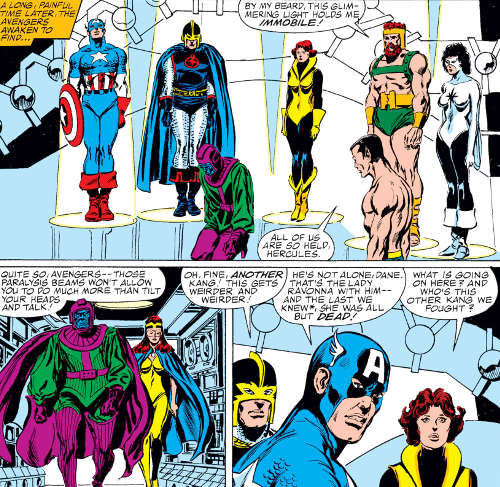 the dozen to get them in a fighting mood. Then, once the Avengers entered the citadel and discovered the body of Kang-Three, Kang-Prime alerted Kang-Two that the Avengers had breached their chambers and killed their "brother." When he arrived and spotted the "assassins," Kang-Two unleashed a Growing Man stimuloid on the Avengers. Once Kang-Two's servant was defeated and his armor disrupted by Captain Marvel's energy powers, Kang-Prime stepped into the fray and used paralyzing rays to capture his brother and the Avengers.

As he boasted of his triumph over Kang-Two and the Avengers, Kang-Prime didn't notice the drain on his equipment caused by Hercules' Olympian might straining against the ray's effects. Ravonna did notice, but she concealed the energy drain from Kang-Prime, tiring of his megalomania. When Kang-Two and the Avengers broke free, the heroes chased Kang-Prime to confront him while Ravonna held Kang-Two at gunpoint. Once the Avengers departed, Ravonna lowered her weapon and tried to convince Kang-Two of the futility of seeking revenge. Kang-Two truly loved Ravonna, as most Kangs did, but even for her he could not forgive the offense Kang-Prime did to him. Exhausted and disgusted, Ravonna let Kang-Two go to his fate. Sure enough, when Kang-Prime was weakened in his struggle with the Avengers, Kang-Two attempted to shoot his "brother" in the back with his battle-suit's weaponry. Instead, he was killed in the backfire of his own weapons, rigged by Kang-Prime while Kang-Two was rendered unconscious earlier.

Kang-Prime was convinced this made him the last divergent Kang in existence, but he soon learned his folly. Immortus stepped from the shadows and revealed he was not only alive, but had manipulated Kang-Prime into taking the steps he did. Immortus also informed his younger self for the first time that he was a future counterpart of Kang. Ravonna had worked as Immortus' agent close to Kang for, while she loved the man, Immortus was in the end all the good things of Nathaniel Richards, while Kang still represented the worst. Furious at being manipulated, Kang was easily goaded by Immortus into taking rash action. Immortus presented a psyche-globe

containing the accumulated life experiences and memories of every divergent Kang eliminated by the Council of Kangs, and claimed it made him the master of Limbo. Kang predictably tried to wrestle the globe from Immortus, and ended up absorbing the full psychic contents of the globe into his mind at once. With that, he truly became "Kang-Prime" -- physically the last Kang in existence who mentally contained the sum total of all Kangs who existed before him. Driven to the brink of madness by the rush of memories from thousands of Kangs, Kang fled the citadel of time and disappeared into the mists of Limbo. [Avengers (1st series) #267-269]

Realizing that the information flooding into his brain was too much for one mind to take, Kang reluctantly activated his temporal circuitry and jumped away, deliberately creating another 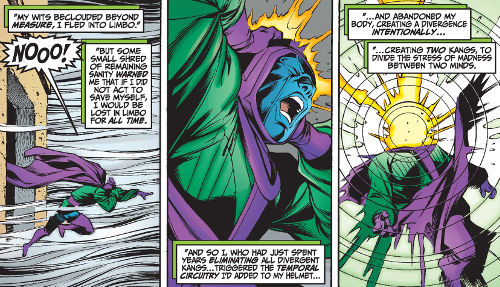 divergence in his timeline despite his efforts to clean up all his existing doppelgangers. Splintering his consciousness like this created two minds able to bear the reduced load of artificially induced memories. [Avengers Forever #9]

[Note: Unless otherwise noted, it is assumed that all published appearances of Kang following this story are chronologically after this point in Kang's personal timeline. Still, because of Kang's non-linear timeline, it is possible that appearances by Kang published after this were appearances of divergent Kangs who were eliminated by the Council of Kangs at some later point in their own timelines. For simplicity's sake, however, we will assume future Kang stories happened to Kang-Prime and his single divergent after the Council of Kangs scheme.]