This page deals with the earliest years of the man who would become KANG. 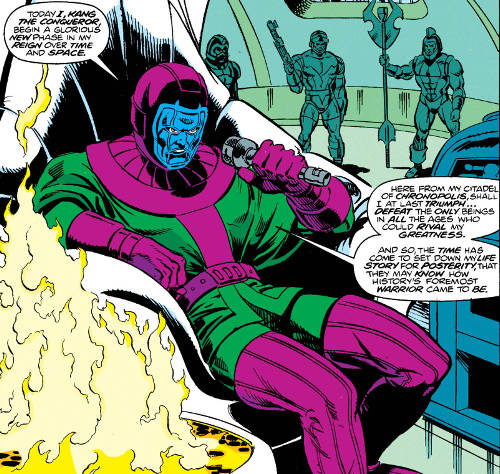 The man who would eventually become known as Kang the Conqueror throughout space and time originated from Earth-6311, a timeline known as Other-Earth. This world was distinguished from Earth-616 due to the fact that it never entered the Dark Ages, but instead experienced an unprecedented growth in science and innovation throughout the period normally recognized as 300 - 1300 A.D. As a result, the people of Other-Earth first landed on the moon in the middle of the 9th century A.D., and restarted their calendar from that point onwards in commemoration of the accomplishment.

Civil war eventually erupted on Other-Earth, however, when a colony on the moon was established and Luna attempted to secede from Terra. The war that followed culminated in the destruction of the moon itself. By the 12th century O.E., large tracks of Earth's surface were desolate wastelands, pelted with meteorites as chunks of Luna continued to fall to the Earth below. It was during this era that Nathaniel Richards the First (father of Reed Richards of Earth-616) traveled sideways through dimensions and took up residence on Other-Earth. 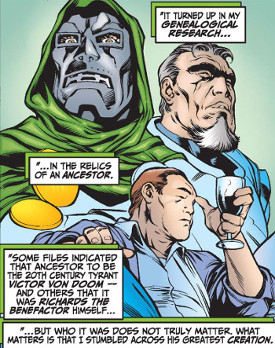 Richards the Benefactor led Other-Earth in regaining their technological and societal footing, revitalizing civilization so that it eventually culminated in a golden age of prosperity. Centuries after Nathaniel Richards first came to Other-Earth, another man named Nathaniel Richards was born, named after the great Benefactor. Nathaniel the Second lived during the 31st century, although the changes in the calendar make it uncertain if he hails from roughly 1000 or 1850 years into the future of Earth-616. [Fantastic Four (1st series) #272-273] All that said, according to the calendar found in his own equipment, Kang was born in the year 3000. [All-New, All-Different Avengers #13]

A great deal of debate has arisen over whether the future Kang was descendant from Richards or Victor von Doom. Early stories (pre-dating the revelation of Kang/Rama-Tut's birth name) suggested that the time machine he discovered belonging to his ancestor was that of Doctor Doom, making him Doom's descendant. Rama-Tut proposed this idea once during a meeting with Doctor Doom, and even unconvincingly suggested that he and Doom might literally be the same person, from different points in one man's timeline. [Fantastic Four Annual (1st series) #2] When Nathaniel Richards and Other-Earth were introduced in the 1980's, Kang's history was directly tied into theirs, and in the 1990's Marvel went so far as to reveal Kang's original name was Nathaniel Richards, the Second, cementing the idea that it was Reed Richards' father's time machine that Kang uncovered. [What If..? (2nd series) #39] Still, even after the revelation of his real name, the debate over whether Richards or Doom was Kang's ancestor continued, particularly by Kang himself. In all honesty, it appears as if the Conqueror would personally prefer to be Doom's descendant, so much so that he ignores or obfuscates data to the contrary, even in his own memoirs or private diaries. [Citizen Kang backups]

Some stories briefly dallied with the idea that Kang was the descendant of BOTH Richards and Doom. Again in the 1990's (during the period of time when Doom and Mr. Fantastic were believed dead at each other's hands), Nathaniel Richards the First told an incredulous Invisible Woman a story about how he once crash-materialized in Latveria during his time travels. Nursed back to health by a local woman, Nathaniel stayed with her for a time before returning to his journeys. According to Nathaniel, a son was born from that union, and grew up to become ruler of Latveria. The shocking implication was that Reed Richards and Victor von Doom were actually half-brothers, and so Kang could theoretically claim both men as common ancestors. In reality, the duplicitous Nathaniel told Susan this story to gain her help in rescuing his actual lost son, who 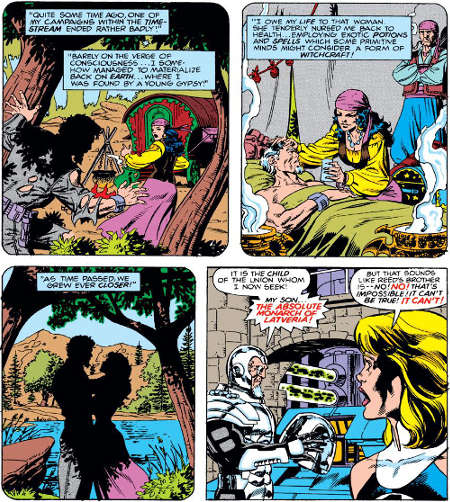 turned out to be Kristoff Vernard, an orphaned Latverian boy whom Doom adopted as his heir, and who did indeed briefly assume the throne of Latveria when Doom implanted a copy of his own genius and memories on the boy. [Fantastic Four (1st series) #395-397] Another set of stories after Heroes Return told of the near-future where Reed Richards died and Sue Storm married Doctor Doom in his absence, producing a child named Valeria von Doom, establishing a shared ancestry between the two lines. However, it was later shown that (through a complicated series of events) the future Doom may have actually been Reed Richards in disguise, trapped in Doom's armor by the Dreaming Celestial and posing as the monarch of Latveria to maintain control of Doom's treacherous allies. [Fantastic Four (3rd series) #14-30]

The future of Nathaniel Richards as a time traveler affected his past early on. In retribution for actions he would one day take as Kang, Vision of the 21st century Avengers arrived at Nathaniel's 31st century crib to murder the child as an infant. Vision was redirected by his own future self, and 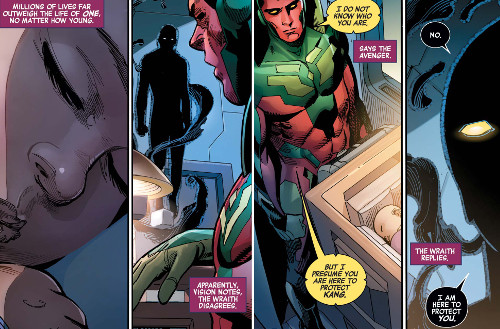 he instead kidnapped the baby to be raised as a better man elsewhere in the timeline. Kang was enough of a walking temporal paradox at this point that the Vision's actions only disrupted his existence instead of erasing it. Kang launched a counter-strike and the Avengers were ultimately forced to return the infant Nathaniel to the moment he was first stolen. [All-New, All-Different Avengers #13, Avengers (6th series) #3]