This page deals with the divergent version of Kang who declined his destiny of becoming Kang and instead decided to remain the Scarlet Centurion.

Choosing to remain active as the Scarlet Centurion, Nathaniel moved sideways through dimensional space and conquered the future of Earth-712 in the 40th century. Dubbed Victorex Prime, his reign began in 3934 and expanded to include not only Earth but a total of fifteen moons and planets. Much like his counterparts who became Kang the Conqueror, the Scarlet Centurion became bored with his successes in the 40th century and decided to travel back to modern times for further conquests. In his first encounter with the original Squadron Supreme, the Centurion arrived in the past using a chronal displacer to steal metals and other valuable resources, transporting them back to his future realm. When the Squadron drove him off, the Scarlet Centurion returned with an army of cross-time commandos to invade their era. Despite this show of force, the Squadron Supreme managed to defeat the Scarlet Centurion once again, and even claimed one of his time devices so that their technical expert Tom Thumb could recreate it later on.

The Scarlet Centurion's next assault on the Squadron Supreme came at them indirectly. The Centurion made contact with the Grandmaster, an Elder of the Universe from Earth-616 obsessed 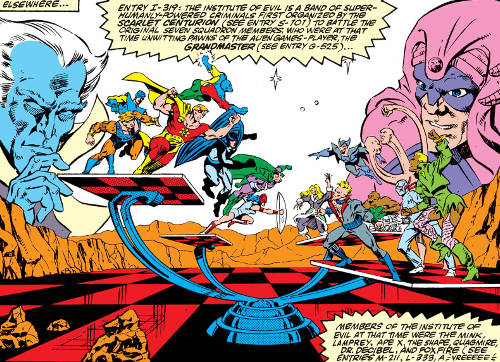 Furious at his own cowardice when faced with the unrestrained threat of Hyperion, Scarlet Centurion found an opportunity to get even. The Squadron's scientist Tom Thumb was desperately racing the clock to cure cancer itself before the parents of his teammate Nuke died from exposure to Nuke's radioactive body. Having exhausted every other avenue he could think of, Tom Thumb decided to approach the Scarlet Centurion by using a trans-temporal somaprojector he reverse-engineered from the Centurion's commandos years earlier. Arriving in 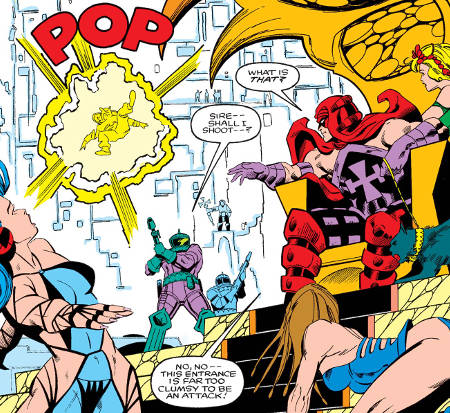 the 40th century in the Centurion's throne room, Thumb explained his needs, and told the Centurion to name his price. The Scarlet Centurion admitted that cancer (along with other diseases, ailments, even aging) had been conquered in his time by use of the Panacea Potion. He offered to provide Thumb with a sample of the potion in exchange for Thumb sprinkling flakes of Argonite, the one substance that could weaken Hyperion, into his leader's food. The act itself wouldn't kill Hyperion, but it would limit his powers so that the Scarlet Centurion could attack Earth without fear of Hyperion's interference. Tom Thumb ultimately refused to betray his friend, and returned to the present empty-handed, with the Scarlet Centurion's laughter echoing in his ears. [Squadron Supreme (1st series) #2]

Several months later, however, Tom Thumb gave in to temptation when his own cancer started to reach its terminal stage. Unwilling to deal with the Scarlet Centurion, Thumb compromised his own moral code by stealing the Panacea Potion from the Centurion's eugenics storehouses with the help of his comrade Lamprey. The Centurion had his guards put forth only a token resistance to the Squadroners' raid. Cruel to the end, the Scarlet Centurion never mentioned to Thumb that the Panacea Potion was little more than 20th century penicillin. Millennia of slow improvements to the immune system of mankind meant that 40th century humanity didn't need anything more effective than that to sustain themselves. [Squadron Supreme (1st series) #9]

Despite this little revenge against the Squadron, the Scarlet Centurion began to suffer from ennui. His conquest of the 40th century was as complete as it would ever become, and he even extended his rule to other time periods and realms as it suited him. Only the 20th century continued to resist his efforts, as even time itself began to conspire against him. A temporal bubble emerged unexpectedly around the late 20th century and surrounding decades, leaving the Centurion incapable of even viewing that time period, much less traveling back to that era. Unchallenged and unfulfilled, the Scarlet Centurion numbly continued to rule his kingdom.

Eventually, in the 35th year of his reign, a crack in the temporal bubble was discovered. The crack only opened more mysteries, however, for it displayed a massive humanoid hand emerging from 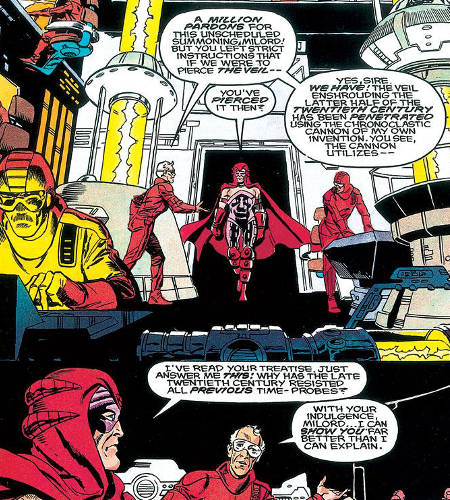 space and growing large enough to engulf the Earth, the sun, and apparently all of space itself. Flushed with this new challenge, the Centurion sent a temporal hologram backwards in time to confer with Emil Burbank, alias Master Menace, the greatest (criminal) scientist of his age. Hyperion had also reluctantly sought out Burbank's assistance with the growing menace from space, and the unlikely trio reached an accord. Menace conceived a device that would stop the entity's spread, but could not complete it in the 10 hours remaining before Earth's consumption. The Scarlet Centurion transported Master Menace to his future, where Menace spent fifteen years perfecting his work before returning the completed device to Hyperion less than an hour after he left.

The Scarlet Centurion holographically accompanied Master Menace and the Squadron Supreme as they journeyed out into space to confront the entity. Although he enjoyed the excitement, Scarlet Centurion remained blasé about the fate of his foes, having already calculated that his own future empire must be divergent enough from the Squadron's present to be unaffected by the entity. When Master Menace's devices failed to arrest the entity's expansion, the Centurion concocted an alternate plan. He retrieved the Overmind, a telepath with the power of an entire Eternal alien species behind him, from his future courts, believing Overmind's mental might could turn back the entity. Even Overmind was unable to stop the entity, however, and his head gruesomely exploded from the psychic pressure he attempted to exert. At this point, the Scarlet Centurion dejectedly admitted defeat. Beaten and unwilling to wait around to watch the end of the universe, the Centurion prepared to return to his future. At the last moment, Arcanna Jones of the 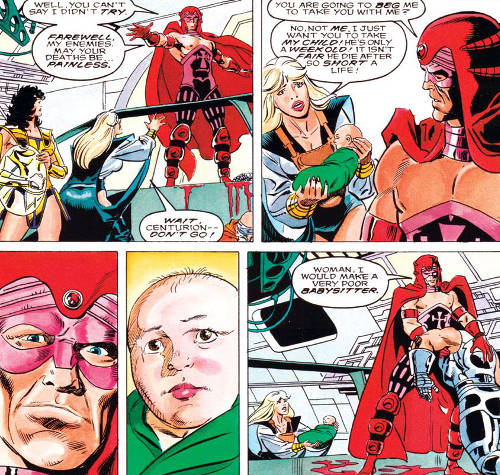 Squadron begged the Centurion to save the life of her infant son, Benjamin Thomas Jones, who was less than a week old. The Scarlet Centurion momentarily considered taking the child into his future, but ultimately rejected the idea and vanished with the parting remark, "Woman, I would make a very poor babysitter."

The crack in the temporal bubble sealed shut after the Scarlet Centurion returned to the 40th century, leaving him unaware of his foes' fate. As a result, he never learned that the Squadron's universe survived the entity. He never learned that Benjamin Jones, self-aware before his time, exchanged destinies with the entity, an outcast from Earth-616 known as the Nth Man, to stop the entity's progress and reverse the annihilation he caused across multiple universes. He never 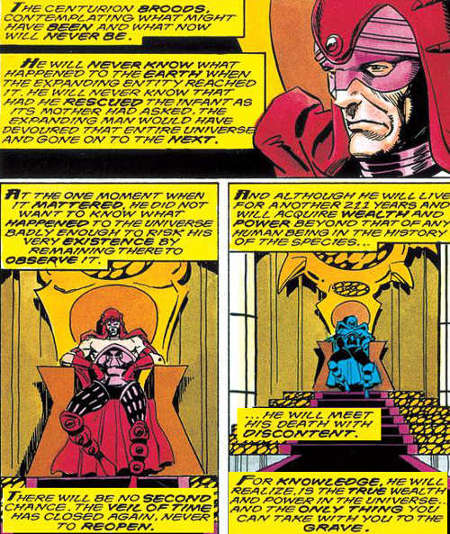 learned that, if he HAD taken Benjamin Jones into the future, the Squadron's universe would have been consumed. All he knew, for the 211 years remaining in his uncontested reign, was that when the key moment came he lost his nerve. He retreated rather than face the unknown alongside the worthiest of foes. The Scarlet Centurion, Victorex Prime, lord of all he surveyed, died unfulfilled without the knowledge he most coveted. [Squadron Supreme: Death of a Universe]

Click here to return to the Nathaniel Richards who did not remain the Scarlet Centurion.