Chris and Darkhawk decided it was time to reveal their secret identity to their parents, in the hopes of turning a corner and mending fences, now that Chris wouldn’t be sneaking off to turn into Darkhawk anymore. The neighborhood was having a welcome home party for Mike Powell when they arrived, though, and Darkhawk was drawn away on other business before he and Chris could get their parents alone. [Darkhawk (1st series) #42] Darkhawk joined a team of auxiliary New Warriors when the original Warriors were cast through time and space by the Sphinx. Darkhawk, Turbo and the others fought against the immortal wielder of the Ka Stone in Egypt and succeeded in recovering Nova, Speedball and the rest from space-time. Despite all their new recruits, the Warriors ultimately chose not to dramatically expand their current roster. Darkhawk appreciated this, and was content to remain only an associate member. [New Warriors (1st series) #48-51] 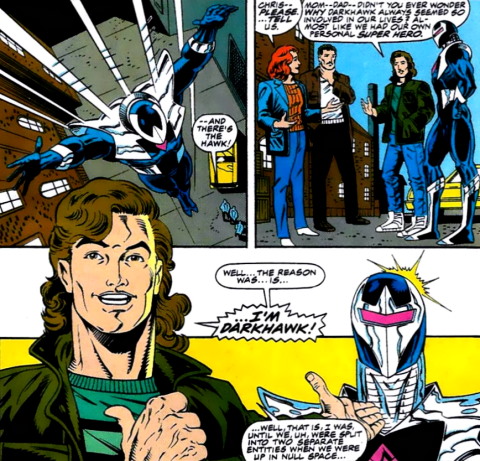 When the dust settled, Darkhawk and Chris finally had the opportunity to speak to Grace and Mike Powell. As Chris tried to explain the whole story of body-swapping and consciousness duplication, though, his parents were naturally incredulous. Instead they blamed Darkhawk, believing the mysterious vigilante had some kind of hold over their son. This only furthered the rift between Chris and his parents, keeping him from moving back home. Still, at WRCK things were looking up. Chris had to bail on work suddenly during the Amulet Quest, and he found Laura had covered for him in his absence. The two of them started to grow closer even as Chris’ relationship with his family became rockier. [Darkhawk (1st series) #42]

Darkhawk started to have problems of his own, completely separate from his former life as Chris. He encountered Portal in Manhattan, and the mutant dimension-jumper told Darkhawk he was being pursued by the Mahari, the alien criminals behind the previous amulet-wielder he had once killed. At that moment, Darkhawk began experiencing spasms of pain, and he had Portal teleport them to the Darkhawk ship to check in with Ned Dobbs. It turned out Darkhawk’s body was not weathering the separation from Chris as well as Powell was. In order to avoid dying, Darkhawk needed a particular set of energetic crystals from one dimension called Kahesha and the unique atmosphere of another called Jormal to sustain himself. In exchange for Portal’s helping arranging Ned’s prescribed cure, Darkhawk promised to aid him against the Mahari once he was healthy again. He also asked Portal to serve as New York’s defender in his absence, and check in on Chris Powell.

Darkhawk had neglected to explain his connection with Chris Powell to Portal, though, so Portal’s vague and curt explanation for Darkhawk’s absence only left Chris confused and worried. Still, he was powerless to do anything about it, so Chris went on with his 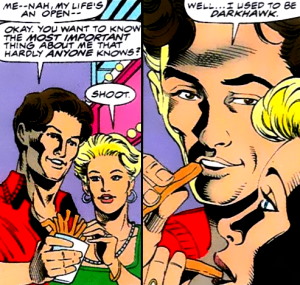 life as best he could. While getting closer to Laura at WRCK, he got an apartment with roommates until he could fix things with his family, and also petitioned Midtown High to lift his suspension and allow him to return to school. When he got back, Chris became acquainted with Dean Coburn, another returning student who took two years off to help his family and had also returned for his diploma. Chris couldn’t stay out of trouble completely. He missed his life as a super-hero and haunted Portal, trying in vain to help defend Darkhawk’s legacy. On a date with Laura at Coney Island, Chris even admitted the whole story about having once been Darkhawk and, surprisingly enough, she believed him. [Darkhawk (1st series) #43-46]

The Mahari caught up to the Darkhawk ship and seized control from Ned Dobbs, looking for the body of their fallen comrade, Kistur. The alien’s inert form still rested on his Perch where it had remained ever since Portal killed his Darkhawk body months earlier. Ned Dobbs used a telepathic signal to reach out to Darkhawk and Portal about the danger he was in. Darkhawk was still recuperating on Jormal, and Portal got himself captured trying to rescue Ned. The weakened Darkhawk raided the ship just long enough to free Ned and Portal, and the three of them teleported back to Jormal. Ned recalibrated the crystal’s healing effect to accelerate Darkhawk’s restoration, but Portal discovered the Mahari had found a way to block his teleporting power, keeping him from returning to Null Space. Fearing that the Mahari intended to seek revenge on Portal by attacking Earth, the heroes returned to New York to defend it. Darkhawk strapped a set of Kaheshan crystals to his body, hoping they could have some residual effect even away from Jormal. However, the Mahari attack in Madison Square Park almost immediately stripped the crystals from his armor. [Darkhawk (1st series) #46-47] 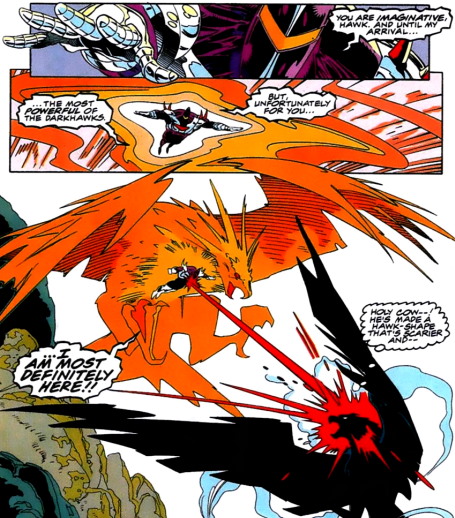 While the heroes were delayed in Manhattan and at Portal’s reservation in New Mexico, the Mahari were able to revive Portal’s former opponent, Kistur. Using the Darkhawk ship technology and combining the two remaining inert androids from their perches, the Mahari brought Kistur’s mind back from stasis as the colossal Overhawk. More than twice as powerful as Darkhawk, Overhawk quickly left his foe completely outmatched. Back in New York, Chris Powell reconnected with Ned Dobbs as they oversaw the transfer of the earliest Mahari invaders to the Vault authorities. However, the Mahari had finally mastered the Darkhawk ship’s transit technology, and brought the entire doomsday vessel from Null Space into the skies over Manhattan, beginning a full-fledged invasion. [Darkhawk (1st series) #48-49] 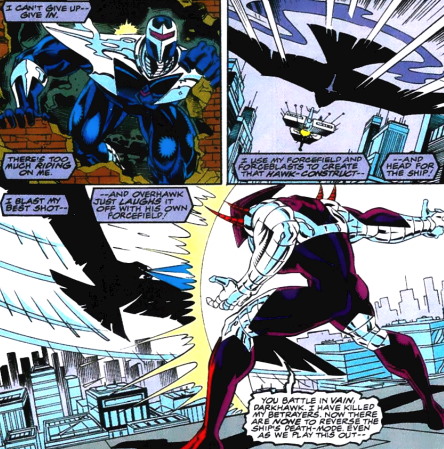 The Darkhawk ship began broadcasting radiation that would eventually eliminate all life on Earth. Darkhawk and Portal defeated some of the Mahari in New Mexico by drawing them into one of Portal’s gateways and abandoning them in another dimension, but Overhawk teleported himself back to Earth. Overhawk had gone mad, though, and killed the Mahari leaders when he learned they had no intention of restoring his organic body as they claimed. Now no one who understood the death-dealing radiation was left alive to halt it. Overhawk battled Darkhawk once again, but then he tackled ‘Hawk towards the radiation emitters. Darkhawk broke free and Overhawk’s momentum carried him into the discharge, obliterating him.

Darkhawk retrieved Ned Dobbs, Chris and Laura from the crowd below to help him examine the control console for the radiation. Ned confirmed the radiation could be halted by manipulating two sets of controls simultaneously and in tandem. Darkhawk and Chris Powell elected to work the machine, for their copied minds were perfectly in synch with one another, and would instinctively match each other’s manipulation of the wavelength modulation controls. As the two young men halted the radiation’s flow, some of the radiation affected them and brought the two halves of Chris Powell together again. Darkhawk and Chris were merged back into one being, able to exchange places at will. 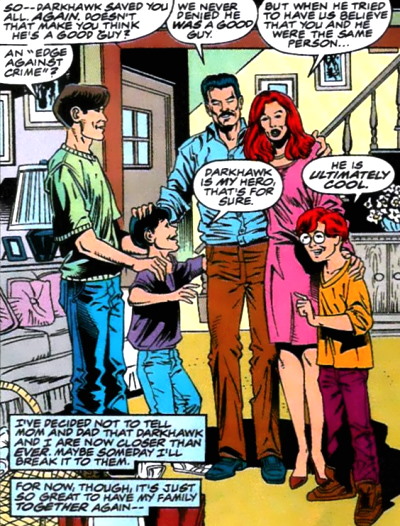 All was not well, however, as Chris discovered a plot had developed against his family while he was occupied elsewhere. Both he and his parents had been independently framed for various crimes, and the twins had disappeared. Dean Coburn was revealed as their kidnapper, seeking revenge after his criminal father was killed by Mike Powell on the job years earlier. He had been seduced by Allegra Bazin into taking action against the Powells, serving as the fall guy for her own plot against her father’s enemies. Once Darkhawk rescued the twins and Dean learned Allegra was only using him, he turned over evidence exonerating the Powells and sending Allegra to jail. Although he gave up (for now) on convincing his parents of the truth about Darkhawk, Chris Powell was happy to have his family back together and everything on stable footing. [Darkhawk (1st series) #50]

Eventually, Darkhawk remembered the Kaheshan crystals he lost at Madison Square Park. Fearing the effect their radiation might have in Earth’s atmosphere, he connected with Spider-Man and the New Warriors to search for them. A group of mostly young people found the crystals and were empowered by them with special abilities. However, the seventh figure to find a crystal was a con artist named Elias Flynn, who gained the power to control the other crystal holders. Flynn forced the others to serve him as costumed criminals called the Metahumes. Darkhawk, Nova, Speedball and Spider-Man fought to rescue the Metahumes from Flynn and another group called the Hostiles, who wanted to exploit them. In the end, the crystals returned to their home world, while the Metahumes retained their powers and an uncertain future. [Spider-Man: Friends & Enemies #1-4] 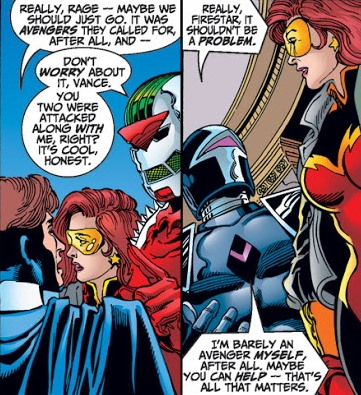 Chris remained active as Darkhawk for some time, although under unexplained circumstances his armor switched back to its original configuration. He continued to be on good terms with the Avengers, and was summoned by Earth’s Mightiest Heroes along with the entire roster to date when faced with the threat of Morgan le Fay. However, Chris chose not to join the team full-time when asked, preferring to focus on being a local hero in Queens and getting up to date on his schooling after his time off. [Avengers (3rd series) #1-4] In a similar situation, he begged off active membership with the New Warriors when Speedball was making the rounds on a recruitment drive of his own. [New Warriors (2nd series) #1]

The consequences of Chris’ life as a super-hero started to pile-up again, though. He was kidnapped by the Stranger (who was posing as the Beyonder) and forced to fight in a version of Battleworld. [Beyond! #3] When Kang briefly conquered the world of the present era, Darkhawk was one of many heroes captured and sent to camps until the Avengers overthrew the time-traveler. [Avengers (3rd series) #51] He was also among the Avengers summoned to the mansion to address the chaos wave, and faced one of their own gone mad in the Scarlet Witch. [Avengers (1st series) #501-503] On top of this, Darkhawk’s reputation took a hit in the press when the Daily Bugle ran an article about Mutant Growth Hormone, a drug that was harvested from the genetic material of superhuman beings and provided a narcotic high and temporary super-powers to users. The Bugle misidentified Darkhawk as a sell-out and willing contributor to the drug peddlers. Despite it making no sense that an armored super-hero would be a source for MGH, “Drughawk” became a laughing stock in New York. [Alias #19]