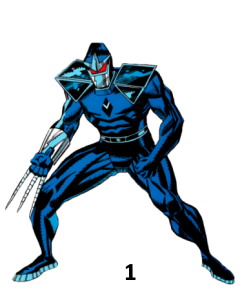 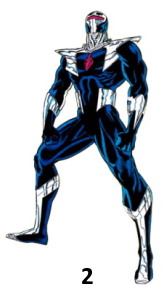 1) The original Darkhawk Raptor body was presented in colors of grey-black or midnight blue, depending on Marvel's coloring pallet at the time. The outer fabric was made of an alien material like a sturdier version of Kevlar. It was adorned with a metallic belt, triangular epaulets on the shoulders and a claw-cable wrist brace on the right arm. The amulet used for the transformation bonded to Darkhawk's chest in the process, serving as both a raised emblem and power source. The neck was reinforced by flexible metal connecting to the removable helmet. Darkhawk's helmet had an extended brim that resembled a hawk's beak from the side, and the design around the visor looking like a talon from straight on. He had collapsible glider wings that unfolded from underneath his arms, generally purple in color with a pointed black trim. [Darkhawk (1st series) #1]

2) Chris’ first upgrade as Darkhawk came during the Amulet Quest. His new Darkhawk body was cast in midnight blue with silver pieces of metal armor around his waist, boots, gauntlets and shoulders. His claw-cable was replaced by a silver point on each gauntlet that seemed merely ornamental at first glance. However, these spikes could telescope as an arm-mounted blade or fire as a wire-guided grappling spear. Although he could still deploy his glider wings, this Darkhawk body relied upon self-propelled flight more than before. His helmet now sported a much less pronounced beak. [Darkhawk (1st series) #38] 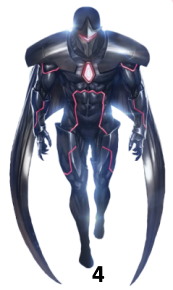 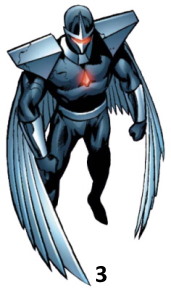 3) After his series ended, Darkhawk went back to his original body design more often than not (with some exceptions). By the time he joined Project P.E.G.A.S.U.S., Darkhawk’s android body mostly resembled his first look, with a few distinctions. His helmet was more like the second armor, without the exaggerated beak. His wings were now silver and made of segmented feathers, closer to Archangel. Finally, his amulet came with a red glow that matched his visor, a distinct color that would prove common for individual Raptors. [Nova (4th series) #17]

--) Once he discovered the origins of his Raptor armor, Darkhawk started to master the power of reconfiguration, changing his default design into different pre-programmed forms selected for specific situations. His previous ability to “summon weapons from the Darkhawk ship” and the debut of his second armor were undeveloped expressions of this ability. Among his configurations were Strike Suit (an exoskeleton of additional heavy armaments), Full or Heavy Combat Mode (a similar design with some power diverted for physical strength), Warflight Mode (a design leaning towards aerial melee), Carbon-Fiber Lightweight Suit (for streamlined acrobatics) or Heavy Duty Suit (for raw strength). [War of Kings: Darkhawk #2]

4) When he and Razor merged again, Chris became an augmented version of his old Darkhawk armor. Because they were now severed from the Tree of Shadows, Darkhawk only had a single configuration stored in the amulet’s memory, switching back and forth between that form and Chris. This Raptor configuration had more pronounced shoulder pads, glowing pink lines of power traced on the armor and an expanded wing design that settled behind him somehow like a cape. [Darkhawk (1st series) #51] 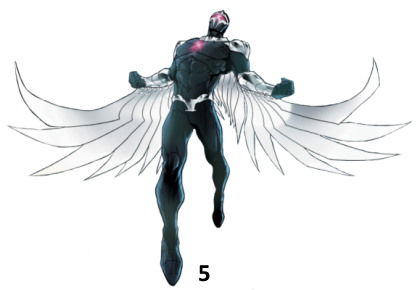 5) By throwing off the influence of the Fraternity, Darkhawk delved deeper into the origins of his amulet and accessed the wild reconfiguration ability that was once the hallmark of Raptor-Prime. Elements of his armor therefore began to look more organic and predatory, like shaped bone instead of processed metal. [Infinity Countdown: Darkhawk #1] 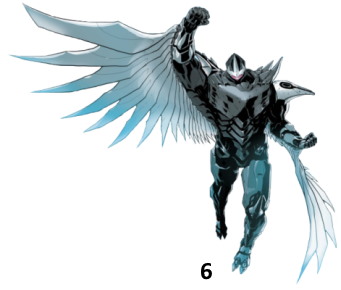 6) This image is NOT to scale. By calling upon the full power of the Tree of Shadows and Raptor-Prime, Chris created a Darkhawk body that could become anything he could imagine. This configuration was not only heavily armored, capable of sublight travel and armed to the teeth, it was also larger than a Shi'ar warship, letting Darkhawk engage the Fraternity's space vessel one-on-one. [Infinity Countdown: Darkhawk #4]