On several occasions, Darkhawk encountered evidence of his famous future incarnation, reverently known as The Powell. Apparently destined to become one of the greatest heroes of his age, Darkhawk first heard about the Powell in Chronopolis’ 2099 era. He later encountered Denak the Earthshaker, who traveled back in time to redeem the legacy of his ancestor Dreamkiller who was beaten by the Powell. Despite these references, Chris never actually encountered any version of this future self.

In the League of Losers saga, the Heroic Age was ambushed by a warlord from 2099 named Chronok. Having compiled files on all the modern era’s heroes from the future, Chronok’s army launched a surprise attack on the past and wiped out more than 90% of Earth’s heroes in a matter of hours. Darkhawk was with Excelsior and saw all his friends killed by the Chronok troopers. Chronok rushed his attack, however, and didn’t have full files on lesser known heroes. In New York, Darkhawk joined forces with a diverse band of survivors including Speedball, Dagger, Gravity, X-23, Sleepwalker and Terror, Inc. They had a confrontation with Chronok himself and Speedball managed to steal his chronometer. The heroes decided to travel into the future a month before the chronometer’s set time, hoping to prevent Chronok’s attack entirely. 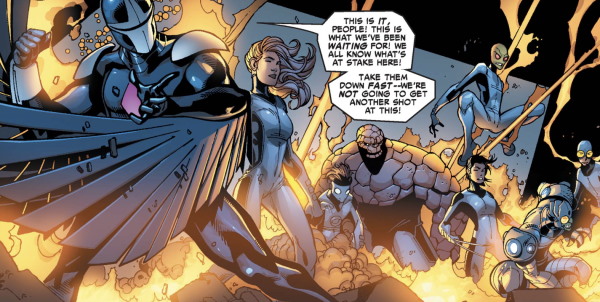 Darkhawk rose as leader of this group and began a relationship with Dagger as they met the future’s preserved brain of Reed Richards and his protégé, Mutant 2099. They discovered the chronometer was of Richards’ design, and so they had several weeks to prepare for Chronok’s attack on the Baxter Center to steal it. Darkhawk’s team beat the Chronok troopers, but the warlord himself still grabbed the device and tried to jump back in time. Darkhawk used his claw-cable to trigger the device, killing Chronok as he was trapped halfway through the time portal. Reed Richards explained that Darkhawk’s team had prevented Chronok’s attack, but that altered history so that they never came into the future, meaning versions of them still existed back in the Heroic Age. Cut adrift from time, Darkhawk and friends chose to remain in 2099 as true heroes for any era. 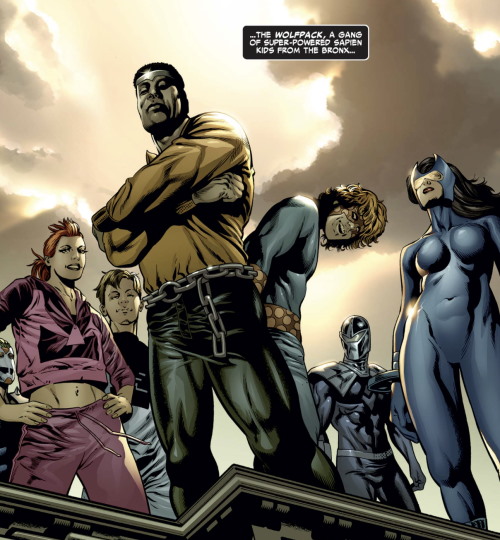 During the House of M, Darkhawk and a number of young Sapien heroes came together as the Wolfpack. They had an understanding with Luke Cage and his Avengers from Hell's Kitchen as they protected normal humans in the Bronx from overreach by mutant law. However, Wilson Fisk betrayed the confederation of human groups to Thunderbird of the FBI. His assassins joined the Brotherhood in striking at the various Sapien groups one night. Darkhawk and the Wolfpack were brought low by Boom-Boom, Blob and Typhoid Mary before being arrested. On Battleworld, another iteration of the House of M existed where Darkhawk and the Wolfpack were part of the larger Human Resistance movement being directed by Luke Cage

Darkhawk was a very different character in the Marvel MAX series, U.S. War Machine. Apparently the product of a S.H.I.E.L.D. operation to reverse-engineer the Stark technology that created War Machine, Darkhawk was publicly known as a vigilante. However, he became mentally unstable at some point and was recovered and held in stasis by S.H.I.E.L.D. The Darkhawk armor tried to mix alien technology with Stark designs, using a virtual reality interface to teach the user how to use the suit on the fly. Darkhawk became obsessed with the VR scenarios and accepted them as his real reality.

He became violently unhinged when reality tried to interrupt the scenarios, so S.H.I.E.L.D. kept him locked in a constant loop of his fantasies. In a bit of parallel reality humor, these "fantasy scenarios" matched events from the life of Darkhawk from Earth-616, such as saving his brothers in the amusement park or joining the West Coast Avengers to fight Doctor Demonicus.