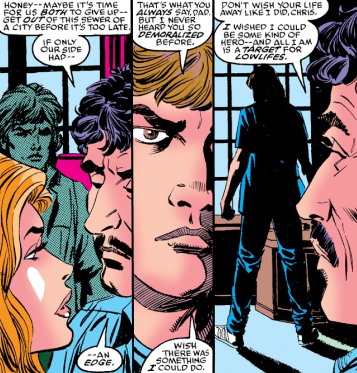 Chris Powell was born and raised in Queens, New York, along with his younger twin brothers, Jonathan and Jason. His family life was centered around criminal justice, with his police officer father and assistant district attorney mother. Mike Powell was a frustrated beat cop, unable to stem the rise of organized crime in New York. He often told Grace and the kids that law enforcement needed some sort of "edge against crime" that never materialized. Grace had similar issues in her constant efforts to make charges stick against the crimeboss Philippe Bazin and his lieutenants. By the time Chris was attending Midtown High School, Grace had annoyed Bazin enough that overtures were made to her. An intermediary gave her an envelope of cash, or the second option of having one less child to feed.

One day, Chris was babysitting the twins while his parents worked over the weekend. He left the kids home alone to hang out with his friends, but they were missing when he got back. Grace was panicking over what might have happened to her sons, so Chris took responsibility to go looking for them. The twins had wanted to visit the abandoned Wonderland Amusement Park before it was torn down by the city, so Chris started there. A homeless man living in the park named St. 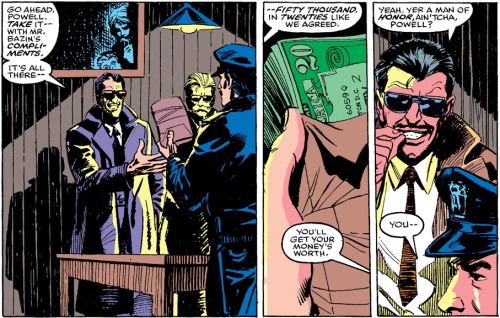 Johnny pointed out where his brothers had run off in the buildings. Chris found Jason and Jon, but together they spotted a clandestine meeting between Mike Powell and Bazin's goons. The Powell boys watched from a concealed spot as their dad, their hero, seemingly took a bribe from the same crime family who were threatening their mom.

A heated argument broke out between Mike Powell and the mobsters, leading Chris and the boys to reveal themselves. Chris saved his dad from being shot, but then had to run with Jason and 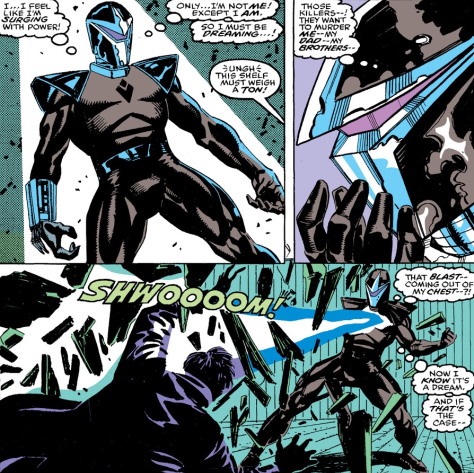 Jon to keep them safe. He had the twins hide in a storage room closet while he desperately tried to distract and hold off the gunmen, throwing anything he could find at them. Wishing he had some sort of "edge" like his father always talked about, Chris reached for a strange amulet and was immediately transformed. Larger, stronger and bursting with power, Chris Powell found himself armored from head-to-toe and bristling with new weapons and abilities. With surprise and raw force on his side, Chris fought off the mobsters. One of them even killed himself with an electrical box and wire while trying to zap Chris.

As the shock wore off, Chris realized how his body had changed and started to panic. He clawed at the amulet where it had fused with his chest, and transformed back into his normal form. Chris raced back to the first room where he found his dad recovering. Mike Powell didn't give his son any explanation -- he just gathered up the money he could and disappeared into the night. After getting his brothers home, Chris returned to Wonderland the next day, only to find the building where he found the amulet had finally been demolished by the renovations team.

St. Johnny appeared briefly to warn Chris about using the power of a "darkhawk" responsibly before disappearing again. Listening to St. Johnny (and to his idealized memory of his father), Chris realized he now had the power to BE an edge against crime, and it was up to him to protect his family and innocent people from thugs like Bazin, as Darkhawk. [Darkhawk (1st series) #1]

Darkhawk's first act was to target Bazin himself, assaulting the crimeboss at his penthouse. Chris hoped to intimidate Bazin into backing off the Powells and revealing anything he knew about Mike Powell's disappearance. Philippe Bazin was only mildly disturbed by Darkhawk's display of aggression, though, and took great interest in his amulet as an object of power. The insane, demonically-possessed super-villain Hobgoblin had forged an alliance with Bazin and his resources to seek out mystical objects of power, and Bazin alerted his "partner" to put Hobgoblin 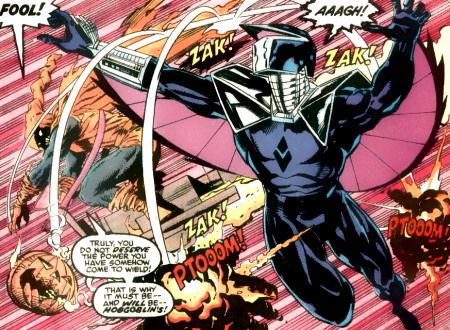 on Darkhawk's trail. Darkhawk clashed with Hobgoblin outside Bazin's office, and took some serious punishment from the shrapnel of Hobgoblin's pumpkin bombs. His Darkhawk body was injured, bleeding out, and he only escaped Hobgoblin by transforming back into Chris after crashing into an alley out of sight. Afraid to change back into the fatally wounded Darkhawk, Chris limped home.

Chris didn't know if he could ever become Darkhawk again, unfamiliar as he was with how to treat his second body's strange physiology and green blood. The next day, he was babysitting the twins again when he saw Hobgoblin strafing Wonderland, clearly looking for Darkhawk. Chris resolved to stay inside this time and avoid risking himself for a fight, especially after he saw Spider-Man arrive on the scene to confront his old enemy. As Spider-Man and Hobgoblin fought through Wonderland, though, Chris spotted some homeless men trapped in the wreckage caused by the battle. Chris ensured the twins would stay home this time and ran outside in his own body to save the men's lives.

After using leverage to pry the men free from the debris, Chris had to consider getting involved further. Spider-Man was losing ground in his fight with Hobgoblin, and Darkhawk might turn the tide. Chris made his decision and triggered the change, prepared to fight even with Darkhawk's injuries. Miraculously, he discovered his Darkhawk body was completely restored, with no signs 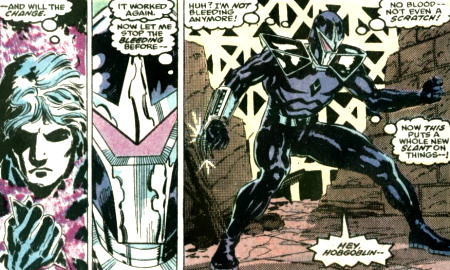 that any injury had even occurred. Chris leapt into the fray, saving Spider-Man from the Hobgoblin. The super-villain launched a girder at Darkhawk, which missed, but continued on speeding towards his house. Chris barely diverted the girder in time to save the watching twins. Hobgoblin flew off, still coveting Darkhawk's amulet, and even Spider-Man was leery of Darkhawk's hostility and aggression. [Darkhawk (1st series) #2]

At Midtown High, Chris tried to maintain a semblance of normalcy on top of everything going on at home. His girlfriend Cheryl and friends Bob, Janet and Steve "Headset" Rubino tried to offer Chris support after the disappearance of his father, but Chris had too many other secrets and concerns to really confide in any of them. In the locker rooms, he overheard rumors about a major Bazin gun deal going down at the Playground Club that night, and vowed to attend. The exchange turned out to be a trap, as Hobgoblin was monitoring Bazin's business interests while looking for another shot at Darkhawk. Spider-Man arrived as well and it turned into a four-way brawl. Chris' anger at Hobgoblin (and at everyone else who had threatened or disappointed him in the past few weeks) exploded so he was prepared to kill his opponent. Spider-Man separated them and denounced the Wolverines, the Punishers, the Darkhawks of the vigilante set who were so willing to kill when it suited them. Chris was shaken by this, if only because he knew he had been out of control and about to kill in anger. He still wasn't sure if killing criminals as Darkhawk was wrong, but resolved that it would be a deliberate choice, not something he did while out of control. [Darkhawk (1st series) #3]

Darkhawk's next move was to break into Riker's Island, seeking out one of Bazin's goons named Louie McPhee who had been present at Wonderland. Chris wanted information on Mike Powell and the payoff from that fateful night. McPhee didn't know where Powell could have run off to -- the money was to pressure his wife to stop her Bazin investigation and arrange protection for “the 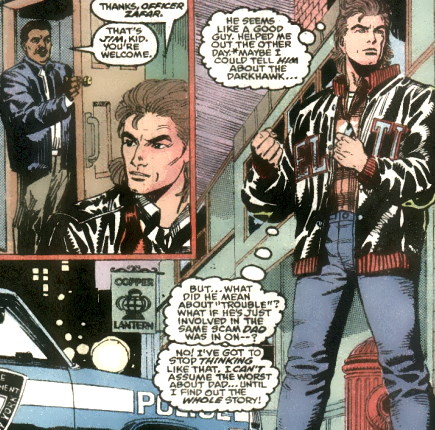 Lilliput.” Chris tried to find out more on his dad's activities from other cops, but most of them wouldn't speak to him now that word got out Mike Powell was crooked. Officer Jim Zafar seemed friendly, but Chris ultimately felt paranoid about trusting another cop until he was sure how deep Bazin's influence went. Meanwhile, Chris was receiving notes and phone calls from someone warning him about the curse of the Darkhawk. He resolved to do more to find out about the mysterious body he had been "borrowing" for weeks.

Chris discovered the Lilliput was a plane smuggling for Bazin out at the Marine Air Terminal, and made a plan to stalk the unloading. Before he could approach the Lilliput, Darkhawk was attacked by a walking tank in armor called Savage Steel. Each of them mistook the other as an enforcer for Bazin's men, and they began tearing apart the air field. During the heavy brawl, Savage Steel was 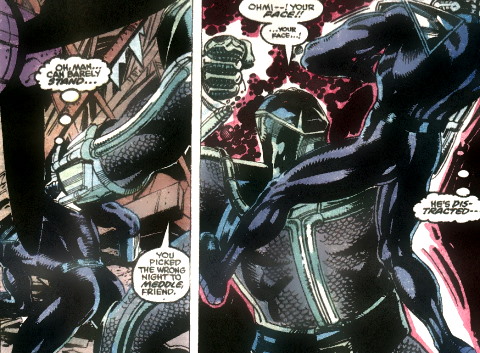 stunned for a moment by the sight of Darkhawk's face when his helmet fell free. The two fighters separated after that and the bruised Darkhawk watched as Savage Steel chased down Bazin's fleeing thugs and blew up their car, killing the criminals. Chris was once again left wondering what direction he would go as a super-hero. Back home, he finally worked up the nerve to look under Darkhawk's helmet himself, only to violently reject whatever sight greeted him in the mirror. Darkhawk's mysteries would remain for another day. [Darkhawk (1st series) #4]

[Note: The "mystery" of Darkhawk's face sort of petered out over time. In the beginning, it seemed as if under Darkhawk's mask was something specific and recognizable. However, later stories veered in the direction of indicating it was fluid, representing the greatest fear of anyone who looked at it. Chris even used his unmasked face like a weapon of last resort 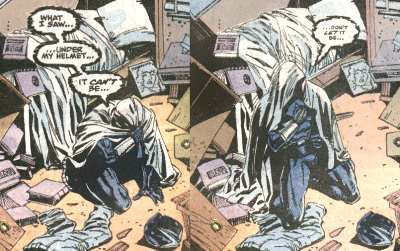 at one point in his career. Some, like Evilhawk, were daunted by it, while others like Overhawk claimed the power of the face couldn’t be used against another Darkhawk. With the Fraternity of Raptors retcon, it was suggested that Chris psychologically rejecting what was under the mask was metaphorical, representing his mind’s inability to process the full information of the Raptors’ datasong.]