One hundred years before he was known as Ronan the Accuser, there was Ronan the Acolyte. Growing up on Kree-Larr, the young, blue-skinned Kree man studied the vast history of his

species in the Bibliopolis, the center of knowledge and wisdom for the Kree Empire. It was here that Ronan learned of the existence of the Inhumans of Earth, created by the ancient Kree as a weapon that was never used. He possibly also learned other secrets of the ancient Kree’s activities on Earth. It would be a lifetime before he used that information. [Inhumans (3rd series) #1]

In his youth, Ronan became romantically involved with Una-Rogg, the daughter of Yonn-Rogg. As an ambitious social climber, Una’s position in a respectable family was quite desirable to Ronan. Their relationship was not all politics, however, as there was genuine passion between the pair. Unfortunately, when they made love for the first time, this unlocked a latent ability to absorb a male’s lifeforce within Una. Such dangerous abilities were illegal within Kree society, with women essentially neutered to remove this power. While Una managed somehow to escape this fate, her relationship with Ronan was ended. [Captain Marvel (4th series) #24]

At some point, Ronan joined the Kree Public Accuser Corps, the Kree Empire’s premiere law enforcement organization. As an Accuser, he was cybernetically enhanced and provided with advanced combat armor and the vastly powerful “Universal Weapon,” to better dole out justice. Ronan worked his way through the ranks, and eventually became Supreme Accuser of the Corps.

One particular assignment for the Accuser would kick start a long and turbulent relationship with the planet Earth. When the Fantastic Four were forced to destroy a long abandoned Kree base on 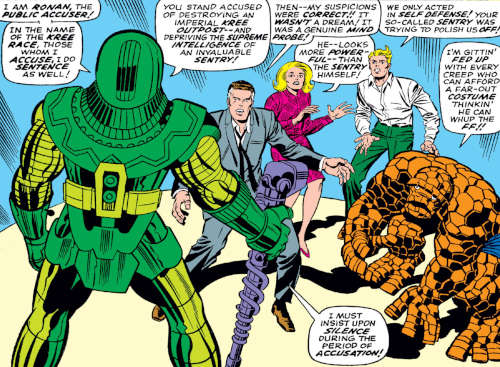 Earth and the Sentry that guarded it, Ronan was dispatched to deliver justice. Not wasting any time, Ronan abducted the four humans and initially bested them with ease. However, when the time came to execute his prisoners, the four superhumans fought with surprising vigor, catching the Accuser off-guard and causing him to be disabled by his own weapon. His ship immediately teleported Ronan away before he could be apprehended by the humans, and he left with the knowledge that humankind was not just an intelligent race, but a race of fighters. [Fantastic Four (1st series) #65]

Having being reminded about the potential of the Earth, the Kree decided to invade. As the representative to the Kree Imperial Minister, Ronan was placed in charge of overseeing the invasion, though he assigned General Yon-Rogg with the task of leading the invasion. Yon-Rogg in turn tasked Captain Mar-Vell with infiltrating the Earth, however the man’s morals and apparent fondness for the Earth forced Ronan to involve himself more directly in the invasion on more than one occasion. [Captain Marvel (1st series) #1, 5, 7]

However, everything was not as it seemed. Ronan, as a blue Kree, considered himself genetically pure, and resented the prominence of the pink Kree in society. Together with Imperial Minister Zarek, the pair had concocted an elaborate plan to put themselves in a position of supreme power. Having previously been defeated by representatives of Earth, Ronan was eager to see the planet destroyed and thus the pair had initiated the invasion. Meanwhile, on Kree-Lar, they established a fake cult to the god Tam-Bor and built a world-destroying device within their idol. They manipulated both Yon-Rogg and Mar-Vell, knowing that Rogg’s jealously of Mar-Vell, and Vell’s nature, would drive him to rebel. Next, they posed as a powerful entity named Zo, and manipulated Mar-Vell into attacking the cult of Tam-Bor.

Ronan intercepted Mar-Vell while he battled the cult, his plan being to kill and frame the man as the leader of the cult. He and Zarek planned to blame the cult’s rise in power on the Supreme 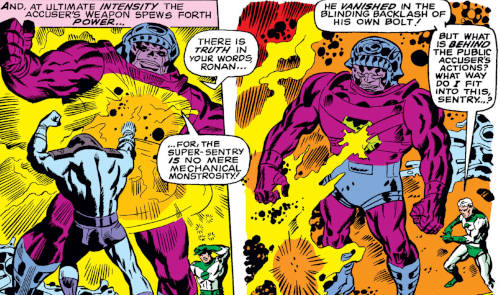 Intelligence’s lax policies, and seize power from the living supercomputer. However, their plan went awry when the Supreme Intelligence learned of it and sent his super sentry to arrest Ronan. The Accuser fought valiantly against the giant robot but was outmatched. Despite, escaping briefly, he and Zarek were both later captured and incarcerated. [Captain Marvel (1st series) #16]

Ronan’s time in prison was short lived, however, as those sympathetic to his cause freed him. With his powerful universal weapon back in his hand, he successfully led a coup against the Supreme Intelligence, capturing the supercomputer and seizing control of the Kree Empire. As his first act as leader, the Accuser activated a deactivated Sentry on Earth to kill Captain Mar-Vell, whom he considered a threat to his rule. [Avengers (1st series) #89]

Recognizing the Earth’s potential for generating superhumans could eventually prove a threat to the Kree, Ronan resolved to destroy mankind. In ancient times, the Kree had built a device in 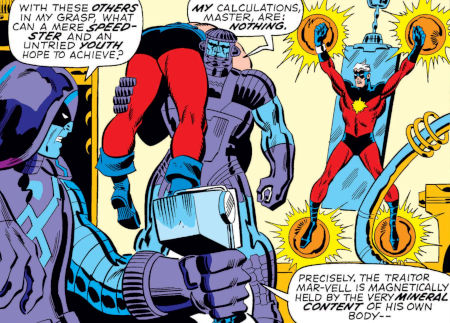 Earth’s arctic, known as the Atavus Plan, which would devolve all life on the planet. The Kree leader teleported to Earth and activated the machine, creating a prehistoric jungle in the middle of the artic that would eventually consume the planet. Before killing Mar-Vell, he decided to taunt the Kree man by making him watch.

This plan understandably brought him into conflict with the Avengers, though with the aid of a Sentry unit he managed to subdue most of the team easily. The Accuser reveled in this position of power, taunting his prisoners and taking delight in mocking the blossoming romance between Vision and the Scarlet Witch. Tables turned for Ronan when his prisoners escaped, then mid-battle he received a troubling transmission from Hala: the Skulls had invaded and war between the Kree and Skrulls had broken out once more. As Surpremor of the Kree, it was Ronan’s priority to lead his people and he immediately abandoned his plans on Earth to manage this new crisis. [Avengers (1st series) #90-91]

Back in his empire, Ronan lead the war response against the Skrulls. The Earth soon became a focal point in the war, due to its strategic location in the cosmos, with both sides vying for control.

With what he learned about the Inhumans back as an acolyte, Ronan assigned some troops to round up Inhuman soldiers, but they subsequently failed, returning with only the Avenger’s human 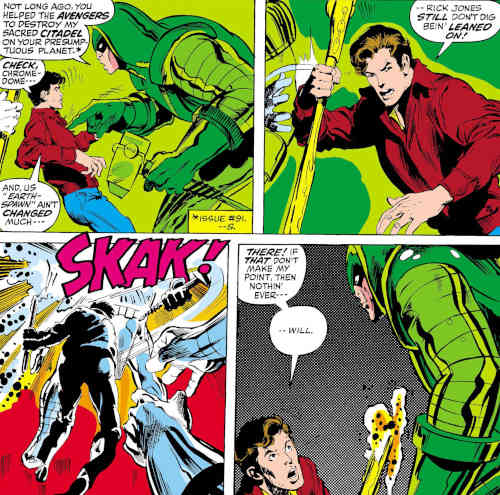 friend Rick Jones. The Accuser decided he liked the human’s guile and decided to make him his servant, though ultimately Rick was too rebellious and Ronan imprisoned him with the Supreme Intelligence. This proved a fateful mistake for the Accuser, however, as the Kree supercomputer helped unlock vast superhuman potential within Rick Jones, which he subsequently used to freeze the entire Kree and Skrull military forces, including Ronan, in place. With Ronan subdued, the Supreme Intelligence seized control once more. [Avengers (1st series) #96-97] 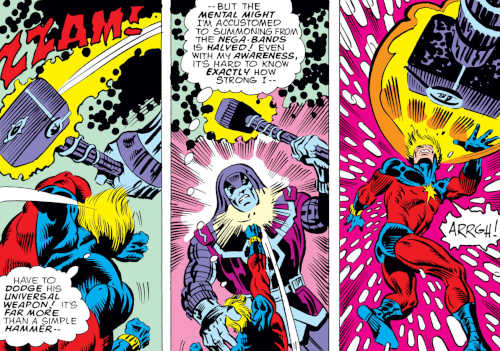 Later, during yet another encounter with Mar-Vell, the Supreme Intelligence was apparently killed. The incapacitated Ronan eventually fell into the custody of two Kree scientists who we were testing a hypothesis that an Earth-based virus was responsible for the recent irrational behavior displayed by the Accuser and other Kree. However, when the scientists’ ship was shot down over Mexico, Ronan escaped. He encountered Mar-Vell soon after and the pair fought, with Ronan killing Rick Jones’ friend during the conflict. This act incensed Captain Marvel, and the man beat Ronan senseless in a rage, before handing him back to the scientists. [Captain Marvel (1st series) #47-49]

As it turned out, the Supreme Intelligence was playing possum and seized control of Ronan’s mind once more. It reshaped the Accuser’s thoughts so he was now a staunch supporter of Supremor. The Kree supercomputer sent Ronan to capture Carol Danvers, a friend of Mar-Vell’s who had recently undergone a process via a Kree psyche-magnetron and had received not only some Kree DNA but superpowers. Ronan fought both Mar-Vell and Danvers, who was operating as the superhero Ms. Marvel, and captured both. While Supremor attempted to merge with Danvers mentally, Mar-Vell goaded Ronan into attacking him, which subsequently freed him and cut off communication with Supremor. An enraged Ms. Marvel took down Ronan with a single punch. Captured once more, Mar-Vell sent Ronan back to Kree-Larr with the scientists that were studying him, to inform the Kree Council that the Supreme Intelligence was in fact alive. [Ms. Marvel (1st series) #19]

The Supreme Intelligence took control of the Kree Empire once more and placed his now loyal servant Ronan back into the role of Supreme Accuser. Later, Supremor was removed from leadership of the Kree once more, having been rendered insane by absorbing pink Kree minds. Ronan, however, retained his position and served under the new leader of the Kree, Nenora. At the same time, a new Kree-Skrull war also broke out.

When the Silver Surfer was reported as attacking Kree outposts, Ronan was dispatched to eliminate the threat. Unknown to the Accuser, however, was that it was actually a Skrull posing as the Surfer responsible for the attacks. Ronan hunted the real Surfer and fought him on a number of occasions while the Surfer tracked the imposter. Eventually, Ronan encountered the imposter himself and killed him with his universal weapon, believing he had killed the real Silver Surfer.

As the Silver Surfer encountered Kree on several occasions after this during the war, Ronan presumably learned he wasn’t dead. He later came face to face with the former herald once more when the Surfer was tricked by the Skrulls into breaking a truce he had made with the Kree to protect his homeworld Zen-La. Ronan attacked the Surfer when he returned to Zen-La, though was soundly beaten by the former herald. [Silver Surfer (3rd series) #13-14]

Soon after, the new war with the Skrulls was brought to a close, only for the Kree to be drawn into a war with the Shi’ar almost immediately after. As a member of the Public Accuser Corps and not the military, Ronan was given little influence in this war. However, when the Avengers were arrested and brought to Hala, Ronan jumped at the opportunity to seize custody of the Earthers now they were in his jurisdiction. He exerted his dominance over the Kree military officer Shatterax, and took control of the prisoners, only for the Avengers to escape from right under his nose.

After a reprimand from the Kree leaders, Ronan’s accusers managed to capture the Avengers once more. When Iron Man came to his teammate’s rescue, Ronan fought the Avenger brutally, 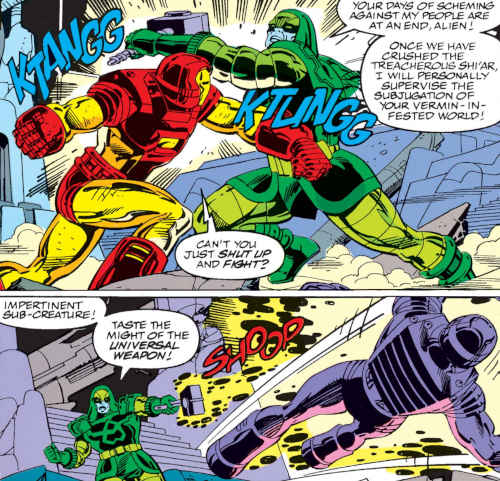 outmatching his primitive human technology, until the other Avengers escaped and overwhelmed him. Despite this defeat, Ronan was inducted into a new elite team assembled by the newly returned Supreme Intelligence: Starforce. Together with his new teammates, the Accuser teleported to the Shi’ar throneworld Chandilar to assassinate Empress Lilandra in retaliation for her sister’s murder of two Kree leaders. Unfortunately for Starforce, they were unprepared for a contingent of Avengers to be present on Chandilar also. While the Kree team fought well, they were outmatched by the combined might of the Avengers and the Imperial Guard and were captured.

Lilandra wished to execute Ronan and his teammates for their crimes. However, when the Avengers helped reveal Skrull agents had been manipulating both sides of the war, Lilandra took mercy on them. Unfortunately for the Kree, the Skrull’s hijacked a Shi’ar nega-bomb and detonated it in the heart of the Kree’s galaxy. Hala, and presumably Ronan’s homeworld Kree-Lar, were devastated by the massive explosion. The Shi’ar seized upon this opportunity and claimed victory in the war, seizing control of the Kree Empire. Lilandra appointed Deathbird as her viceroy for the Kree territories and assigned the Starforce as her personal guard. [Operation: Galactic Storm crossover]