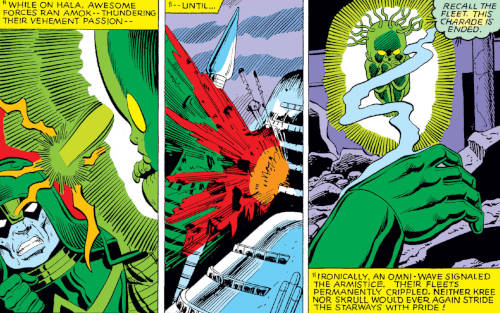 During the Kree/Skrull War depicted in What If (1st series) #20, Ronan made one key decision differently. He killed Rick Jones rather than imprison him. This eventually led to his downfall as the imprisoned Supreme Intelligence, having lost a key pawn in its plan, seizing Jones’ body and merging with it. This powerful hybrid killed Ronan easily and seized its empire back. 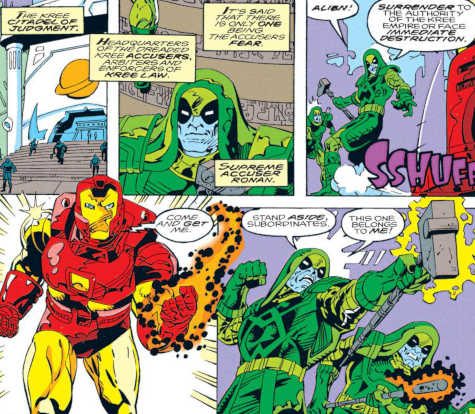 In a version of the Kree/Shi’ar War shown in What If (2nd series) #55, the Kree intercepted Deathbird’s assassination attempt, changing the course of the war. The Avengers that were dispatched to Hala found themselves arrested. Iron Man, however, wouldn’t go down without a fight and battled Ronan one on one, before detonating his armor and killing the both of them in an epic blast. 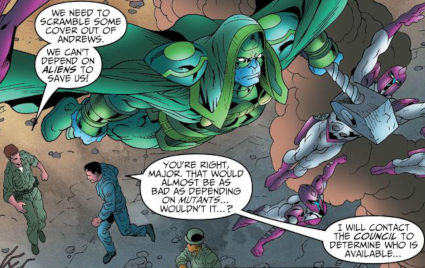 Judge Advocate Ronan was the main ambassador for the Kree to the House of M, and was the lead delegate in negotiations attempting to forge a new treaty. His soldiers also assisted the House of M with domestic matters. When one of Ronan’s soldiers, Genis-Vel, went AWOL, he dismissed any aid from his mutant allies and tracked the soldier himself. He showed genuine concern for his soldier when Genis started displaying the odd ability to split time, threatening the planet. Ultimately, it was some rogue humans who helped subdue the soldier with a biotoxin designed to eliminate the Kree.

In the Ultimate Universe, Ro-Nan served as Grand Admiral of the Third Kree fleet, fighting a 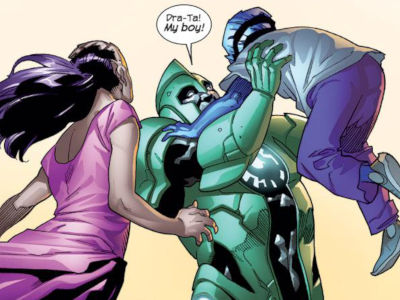 never-ending war against the Chitauri. During one particular battle against their foes, both forces were surprised by the Gah Lak Tus swarm, which soon merged with the Galactus of 616 universe, increasing its power. Recognizing the threat, Ro-Nan attempted to negotiate a temporary alliance with the Chitauri but they refused. Later, when Galactus attacked Hala, Ro-Nan sent his wife and child away on arks while remaining behind himself to help fight off the Devourer. The Grand Admiral and Hala survived the attack, thanks to the efforts of Mahr-Vel, the Silver Surfer and Rick Jones. [Hunger #1-4] 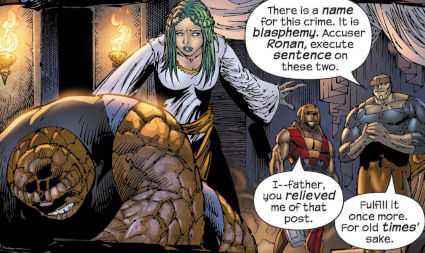 When the Fantastic Four of the Ultimate Universe travelled to another plane of existence, they discovered the Endless Resurgence, an empire ruled by Thanos, based on the planet Acheron. In this reality, Ronan was Thanos’ son and quelled rebellions in his role as Public Accuser. He fought the Fantastic Four and received a rare defeat, though later earned his father’s respect once more during an invasion of Earth. Unfortunately for Ronan, the Fantastic Four managed to kill Thanos with the help of Ronan’s own sister, and presumably the Accuser lost his role in the empire.