Noh-Varr managed to steal a ship and escaped Hala, after which he returned to Earth, despite the Avengers telling him never to return. He parked his ship in orbit around his adopted world and embraced a more carefree attitude to life, discovering a love for human music. Whether he reconnected with Annie is unknown. However, if he did, their relationship didn’t last long, because when he was next seen he had formed a relationship with Kate Bishop of the Young Avengers after a one-night stand. Kate apparently held no hard feelings against Noh-Varr for their last encounter, when the brainwashed Kree attacked the Young Avengers and kidnapped her friends.

[Note: A future version of Annie did claim that Noh-Varr reconnected with Annie upon his return to Earth, but he eventually drifted away and left her. However, this Annie was later revealed to be a magical construct, so the truth of her words is questionable.] 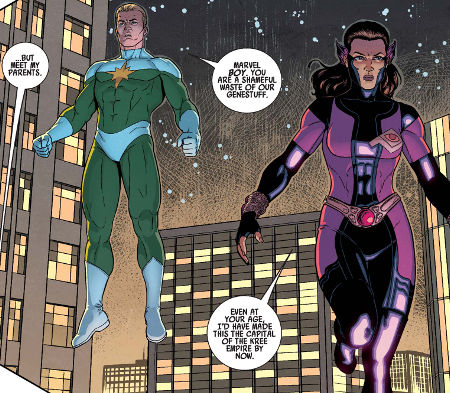 When Kate learned that her fellow Young Avengers, Wiccan and Hulkling, were in trouble, she enlisted Noh-Varr’s aid in helping free her friends from the clutches of the interdimensional parasite Mother. Noh-Varr was instrumental in freeing Kate’s friends, along with their uneasy allies, America Chavez and a young Loki. Unfortunately for Noh-Varr, one of Mother’s abilities included creating simulacrums of deceased parents, meaning he came face to face with copies of his own parents, Captain Glory and Star Splendor. However, he handled this encounter well, going as far as even killing the copy of his father and calmly claiming it was what he would have wanted.

While the disparate group of young heroes managed to evade Mother’s clutches, the monster was too powerful. She blinded adults to her presence, swayed parents to her side and created simulacrums of dead parents. They would have to run and avoid anywhere their parents had died. Kate offered Noh-Varr an out, as it wasn’t his fight, but he opted to stay by Kate’s side and provided his ship as transport. [Young Avengers (2nd series) #1-6]

This ersatz group of Young Avengers spent the next three months avoiding Mother, travelling and having various adventures. Noh-Varr grew much closer to Kate and her friends during this time, even helping Hulking through a personal crisis. During these adventures, the team took to calling Noh-Varr “Marvel Boy,” a name he seemed to hate and ignored.

After a time, it almost appeared as if the group had forgotten about their troubles. This was ended when the former X-Man Prodigy sought out the group to tell Wiccan that his brother Speed had been kidnapped by a doppelganger of their friend Patriot.

Miss America and Loki determined that Speed had been dragged into the multiverse and used her abilities to help the group follow his trail. For the next five weeks, the friends travelled the multiverse, often seeing terrible versions of themselves, as if “Patri-not” were trying to show them something. For his part, Noh-Varr encountered several universes where he had followed through on his promise to make Earth the capital of his Kree Empire, often with apocalyptic results. On one of these worlds, he found himself face to face with doppelgangers of Oubliette, the Exterminatrix, which dragged up old feelings. 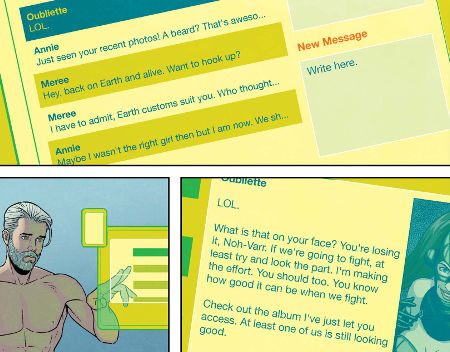 Unbeknownst to Noh-Varr, Mother had recruited some of his past lovers; Oubliette, the time travelling future version of Annie, and Meree, whom Annie had apparently plucked from the timestream before her death. All three began sending messages to Noh, attempting to lure him back, though only Oubliette’s messages seem to rattle him at all.

Things finally came to a head with Mother when she captured Hulkling and threatened to unleash a horde of evil ultimate reality versions of the Young Avengers, including various nasty Noh-Varrs, 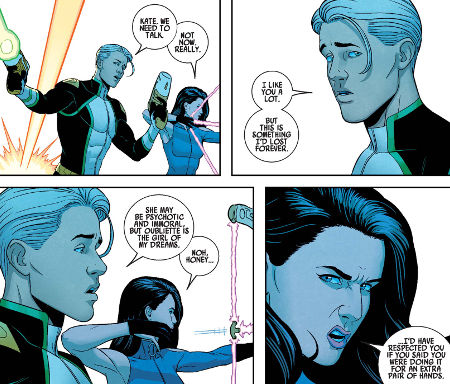 on the Earth. With adults under Mother’s influence, the Young Avengers called on an army of superpowered kids to help fight the parasite’s forces. Meanwhile, Noh-Varr and the others entered Mother’s dimension and battled the small group of the teams of exes she had gathered, including Annie, Meree and Oubliette. Noh-Varr was enthralled by Oubliette and, when she asked him to come back to her, he broke up with Kate there and then. Unfortunately for Noh-Varr, Oubliette and the other exes weren’t real; rather they were constructs created by Mother (…or Loki’s ex Leah… or maybe Patri-not) which evaporated with Mother’s defeat. [Young Avengers (2nd series) #8-13]

Afterwards, the young group of friends and their allies threw a New Years’ Eve party to let off steam and celebrate Kate’s birthday. Noh-Varr realized the mistake he had made and tried to reconcile with Kate, though she wanted nothing to do with him. After this, the young Kree questioned his life. He had tried both to conquer and save the Earth and wound up with nothing, so he decided he would just live for himself. [Young Avengers (2nd series) #14-15]

Noh spent time either wallowing in self-pity or relaxing (depending on who you ask) in his space station, so he was oblivious when the Exterminatrix participated in a public fight with the Avengers over one of the Watcher’s eyes, resulting in an explosion of knowledge in New York when the eye detonated. Hulking and Prodigy informed Noh-Varr of his ex’s activities and the three headed to New York to investigate. Instead, the trio stumbled across the Hood trying to steal the Watcher’s knowledge from a building full of drug addicts. While he never found Oubliette, Noh did find catharsis while defeating the Hood. He also found himself back on speaking terms with Kate, exchanging friendly text messages with her during the ordeal. [Original Sins 1-5]

When Noh-Varr learned that the Inhumans had lost the last of their terrigen, he came to the realization that he could help them with his extradimensional knowledge. Now embracing the Marvel Boy moniker, he approached the Inhuman royal family and made an impassioned speech 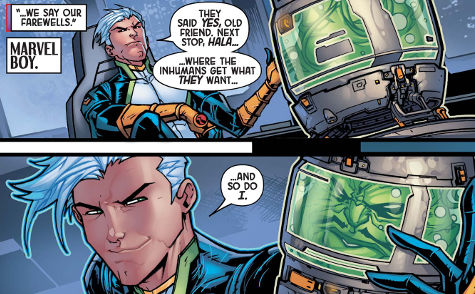 about how he had lost his way since he came to this Earth and had forgotten the learnings of his people. He told the Inhumans he knew the secret of terrigen, and the secret of who the Inhumans really were, buried deep within Hala. Together with the Inhuman royal family, they would travel to Hala, recently devastated by J’son of Spartax, to recover the secret of terrigen. However, Noh-Varr had an ulterior motive. He had recently scrapped together the last traces of the Plex Intelligence into a seed and hoped the trip to Hala would provide the opportunity to resurrect it. [Inhumans Prime #1, Royals #1]

Together with representatives of the Inhuman royal family, Noh-Varr travelled to Hala, though they were immediately attacked by Ronan the Accuser. With his pocket battlefield, Noh-Varr managed to save everyone when the ship crashed and soon after he was confronted by visions of Kate, brought on by Ronan’s new abilities. Noh admitted to “Kate” that leaving her was a mistake, because he didn’t trust his didn’t trust his feelings. He was faced by visions of Carol Danvers , Norman Osborn and Captain Glory, each accusing him of his failures, all before he finally used his pocket battlefield to break free.

Now free, Noh planted the Plex seed with the remains of the Supreme Intelligence, resulting in a resurrected Plex Intelligence that incorporated all the knowledge of Supremor with its own. Plex

formed a psychic connection with Noh-Varr and, through him, the Inhumans learned about the creators of the Kree, the Progenitors, and the existence of primagen, the substance on which terrigen was based. [Royals #4-5]

The Progenitor’s world was in fact a massive installation containing numerous worlds and various classes of the gigantic robotic aliens, a World Farm. Almost immediately upon arrival, the group’s ship was brought down by the Progenitors, though Noh-Varr’s pocket battlefield thankfully saved the day again. While fighting their way through the facilities of the World Farm, Noh-Varr was immolated by a Progenitor and, though he survived being burned alive, he was out of commission for the result of the mission. Despite this, the Inhumans managed to retrieve some primagen and escape back to Earth. [Royals #9-11]

The group’s actions on the World Farm drew the ire of the Progenitors, who tracked them back to Earth. Holed up on the moon, a healed Noh-Varr aided the Inhumans in their battle against the Progenitors. Ultimately, the ancient and powerful automatons were driven back by Maximus and Medusa in the astral plain, taking advantage of the Progenitor’s weakness to mental attacks. [Inhumans: Judgment Day #1]

With his obligations to the Inhumans fulfilled, what comes next for Noh-Varr remains to be seen.