After a brief time as a solo superhero, the Protector was approached by the Avengers, who needed his aid. Recently, Norman Osborn had fallen from grace and his Dark Avengers had been 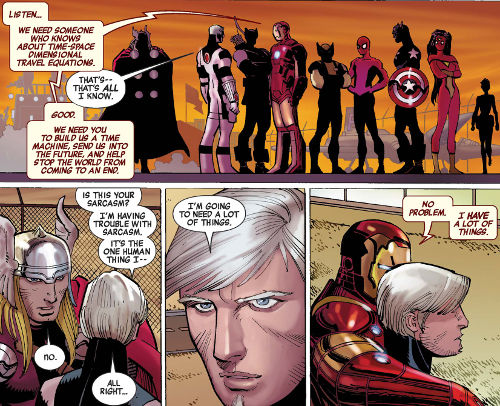 disbanded. With SHIELD reformed and Steve Rogers placed in charge, he reformed the “real” Avengers. The timestream was damaged and the Avengers needed his knowledge of advanced technology and reality travel to construct a time machine. Iron Man was skeptical about allying with Noh-Varr, given his history, but the Kree assured him that, while he struggled to adjust to life on Earth, he knew his purpose now. He was the Protector. [Avengers (4th series) #2]

With the aid of the Avengers’ other big brains, Iron Man and Spider-Man, Noh successfully created a time machine that allowed the group to first view the future and then actually travel to it. Together with some of the Avengers, Noh-Varr witnessed the chaotic future of the Kang/Ultron War, which would subsequently cause the timestream to fracture. The future Tony Stark failed to recognize Noh-Varr and realized that he was the one thing that was different from the past, which somehow made him key to changing the future. Together with the Avengers, he time travelled to before the Ultron Kang/War and helped convince Ultron to let Kang win, thus preventing Kang from breaking the timestream in a desperate bid to win. The Protector’s Kree technology was key in preventing Ultron from killing them, and in convincing the robot to help them. With their mission a success and the timestream saved, Noh-Varr was officially invited to join the Avengers. An offer he gladly accepted. [Avengers (4th series) #3-6]

A significant step in any superhero’s relationship is introducing their significant other to their teammates. After a brief time with the Avengers, Noh-Varr introduced his awestruck girlfriend Annie to his colleagues. Unfortunately for Annie, her introduction was interrupted by the Red Hulk smashing into Avengers Tower. [Avengers (4th series) #7]

When the Asgardian fear god, the Serpent, attacked the Earth, the Protector fought alongside his fellow Avengers. With an Asgardian-enhanced Hulk on a rampage in South America, Noh-Varr was sent to intercept him alongside some of his teammates. While the young Kree briefly held his own, he was outmatched by the Green Goliath and the team were force to retreat.

After returning to New York, Noh-Varr fought valiantly alongside his teammates against the overwhelming odds of the Serpent’s forces. Using his advanced technology, Noh managed to hack into Tony Stark’s systems and activated a legion of Iron Man armors, greatly increasing their forces. He backed this up by hacking the systems in the enemy’s mechsuits, shutting down a significant portion of the Serpents forces.

Ultimately, the Avengers were successful and Noh-Varr participated in the final battle against the Serpent and his Worthy. However, the victory did not come without loss; Noh-Varr’s comrades Thor and Bucky Barnes were both slain. [Fear Itself crossover] 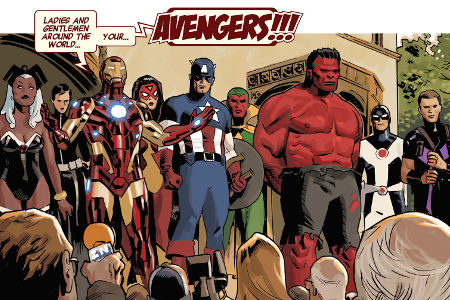 After this period of turmoil, the Avengers roster went through a change. Captain America wished to bring in some familiar faces, along with some new powerhouses, to make up for their losses, while Iron Man used this as an opportunity for some good publicity. Noh-Varr retained his position in the new lineup.

Almost immediately upon announcing the new lineup in a press conference, the group were surprised by the return of Norman Osborn and his revived HAMMER, which had incorporated HYDRA, the Hand and A.I.M. If Noh-Varr was rattled by the return of the man that manipulated him, he didn’t show it. Whilst paired up with Iron Man, trying to locate Osborn, Iron Man’s armor 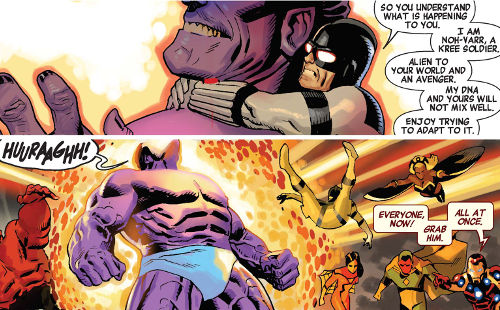 was hacked by HAMMER and the Protector was forced to fight his comrade. Noh fought valiantly against Stark but, in the end, he fell and was captured alongside many of his teammates. However, after later escaping with his comrades, his Kree DNA was key in destabilizing Osborn’s new Super-Adaptoid derived based abilities and defeating the man. [Avengers (4th series) #18-24]

Noh-Varr and his advanced technology once more made him the MVP for the team when he managed to track down the remnants of A.I.M., from Osborn’s HAMMER, where no one else could. Both Iron Man and Captain America praised the young Kree and he thanked them both for the opportunity, as he loved being an Avenger and learned so much while on the team. Unfortunately for Noh, almost immediately after, he was contacted by the Kree Supreme Intelligence, who informed him of a change to his mission parameters. The Phoenix Force was coming to Earth and he was to capture it for the Kree and, if any of his teammates stood in his way, he was to eliminate them. This news left him visibly conflicted, though he didn’t reject the directive.

The Avengers became aware of the oncoming Phoenix soon after and assembled a team to intercept and capture it, a mission that Captain America deemed a likely suicide mission. Noh-Varr was selected for the mission, or volunteered, alongside a group of some of the most powerful Avengers. However, because of the Supreme Intelligence’s mission, Noh knew he would likely burn his bridges with the Avengers and never be able to return. Because of this, he went to see Annie and said goodbye to his girlfriend one last time. He gave Annie a crystal to remember him by and kissed her goodbye before teleporting out of her arms.

When the Avengers encountered the Phoenix, they failed spectacularly, forcing the team to retreat to the Kree homeworld to heal their wounded and repair their ship. Although Noh-Varr was from another dimension, he still felt deeply happy to be back on Kree soil. However, part of this feeling 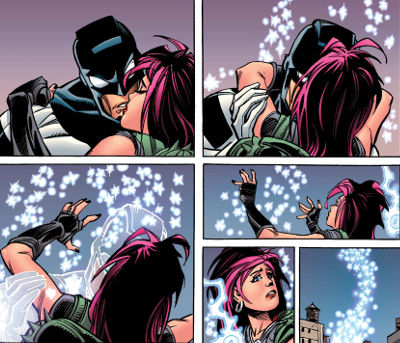 may have been due to outside influences. A Kree minister, nephew of the late Captain Mar-Vell, used the Phoenix Force to resurrect his uncle and used him to lure the Phoenix to Hala, in the hopes of jumpstarting Kree evolution. He also used an omniwave projector to subdue the population into submission, which drove Noh-Varr and Ms. Marvel to attack their teammates and ally with the revived Captain Marvel. Ultimately, Vision was able to interfere with the omniwave signal, freeing Noh-Varr and Carol from control. In the end, Mar-Vell sacrificed himself to set the Phoenix back on its original course, back towards Earth. 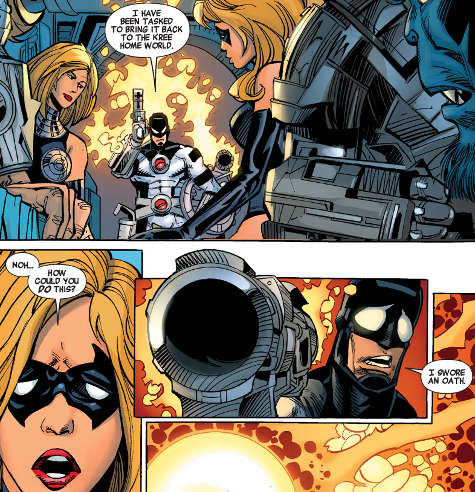 After studying Thor’s hammer, Noh-Varr had a breakthrough with developing a new containment vessel to capture the Phoenix. With it, Thor managed to absorb a piece of Phoenix, through which the Avengers hoped to learn a means to fight the cosmic entity. However, for Noh-Varr, he had reached the point of no return he had been dreading; betray his teammates or the Kree? A clearly conflicted Noh-Varr chose his people and betrayed the Avengers, as he stunned the team and stole the fragment of the Phoenix Force.

However, when Noh-Varr delivered the Phoenix fragment to the Supreme Intelligence, he was shocked to learn that the entity had no intention of saving the Earth from the Phoenix. Whilst the 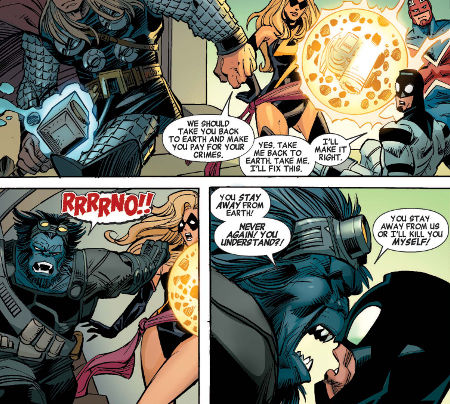 Supreme Intelligence had appointed him protector of the Earth, it was to prevent the Earth’s resources from being used against the Kree, not to protect mankind. Noh-Varr rejected this violently and attacked the Supreme Intelligence and his Kree soldiers. When the Avengers arrived soon after, he tried to explain his actions but his teammates didn’t want to hear it. They angrily abandoned him on Hala and took back the Phoenix fragment. To make matters worse, because he had betrayed the Kree, they deactivated his nega-bands, greatly reducing his abilities on a planet that wanted him dead. [Avengers vs. X-Men crossover]