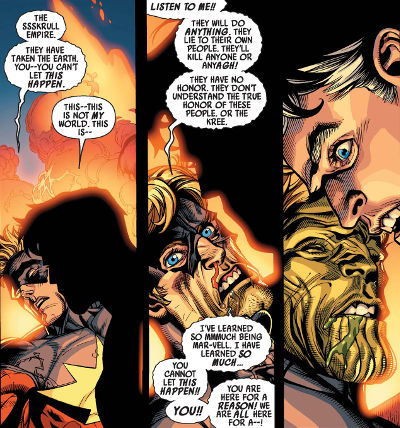 Unfortunately, Noh’s time in charge was brought to an end when a Skrull infiltrator destroyed his omni-wave projector, driving the prison into chaos. The Secret Invasion had begun. With the Cube no longer in his control, Noh-Varr left and sought out Captain Mar-Vell. He soon discovered the hero, mortally wounded after bringing down a Kree ship. The Captain begged Noh-Varr to stop the Skrulls, telling the younger Kree he was there for a reason. When Mar-Vell finally succumbed to his wounds Noh was shocked to learn that he was actually a Skrull imposter.

Despite this, the Skrull’s words still impacted the teen, and Noh-Varr raced to New York to join in the final battle against the Skrulls and was present when the alien invasion was ultimately defeated. [Secret Invasion crossover]

With nowhere else to go, Noh-Varr returned to the now abandoned Cube, where, after a period of silent contemplation, he was discovered by Norman Osborn, the new head of SHEILD (soon to be renamed HAMMER). Osborn was putting together a new team of Avengers and told Noh-Varr he wanted him on his team. As a sworn enemy of the Skrull Empire, one who publicly declared his allegiance to Earth during the final battle with the Skrulls, Osborn considered him perfect for the role of the new Captain Marvel.

Noh-Varr agreed, though little did he know that Osborn’s new team were a dark mirror of

Avengers that had come before, largely made up of criminals and psychopaths. As far as the naïve Kree knew, he was a member of Earth’s premier team of heroes. [Dark Avengers (1st series) #1]

As a member of the Avengers, Noh-Var participated in missions against Morgan le Fay, the frost giant Ymir and the Olympus Group, as well as clashes with “rogue” heroes such as Luke Cage’s Avengers and Thor. [Dark Avengers (1st series) #2-4, Free Comic Book Day 2009 #1, Thor (1st series) #600]

When the savage She-Hulk, Lyra, hopped realities on a mission, apparently to kill Norman Osborn, Noh-Varr and the Dark Avengers were sent to intercept her. Upon meeting the powerhouse, Osborn singled Noh-Varr out to take her down one on one, because, in his words, the young Kree had failed to impress him. Noh-Varr deployed his pocket battlefield and cockily confronted the She-Hulk. However, his bravado was misplaced as his opponent nearly overpowered him, before a distraction from Daken allowed him to take Lyra down with his poisoned thumbnail. [All-New Savage She-Hulk #2-4]

Noh-Varr’s predecessor, Mar-Vell, had set a high bar for him, having inspired a whole church of humans following his example. When Noh debuted as the new Captain Marvel, this had the unexpected side effect of driving the members of the South Carolina Church of Hala to committing suicide, for fear of being corrupted by the “false prophet.” Noh felt very guilty for what happened and began to feel the level of responsibility the title of Captain Marvel brought with it. He snuck out 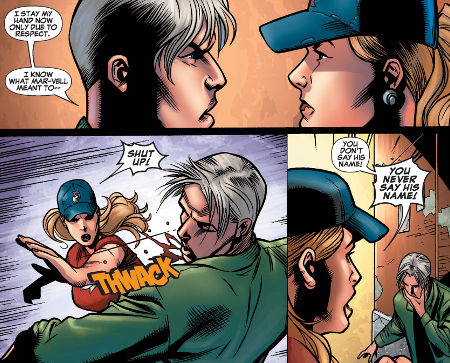 of Avengers Tower and attended the mass suicide site. While there, he crossed paths with Carol Danvers, Ms. Marvel, and the pair exchanged heated words about the late Mar-Vell and Noh-Varr’s role on Osborn’s Avengers. Carol slapped Noh for just speaking Mar-Vell’s name and when the pair parted ways Noh pointed out that, while she had attacked him multiple times, he had not raised his hand to her once during the interaction. However, he promised that next time he would not hold back. [Ms. Marvel (2nd series) #35]

While Noh didn’t form any close relationships with any of his teammates, he did catch the eye of Karla Sofen, Ms. Marvel, who had formerly been the criminal Moonstone. After one mission, Karla 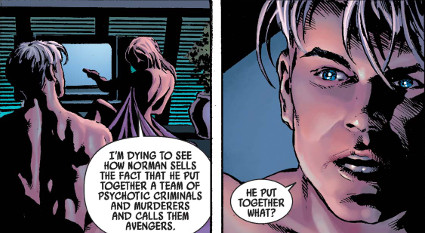 invited Noh into her room and the pair had casual sex, the first human Noh-Varr had slept with. Afterwards, Karla casually revealed to Noh what was common knowledge to everyone else; Osborn’s Avengers were all criminals and psychopaths. Noh-Varr was stunned by this revelation. [Dark Avengers (1st series) #5]

Noh fled Avengers Tower before the morning and went on the run. Now recognizing the kind of man Norman Osborn was, Noh-Varr immediately set about trying to thwart his plans. Before he ran, he had learned that Osborn was actively trying to acquire The World, the advanced facility that had belonged to the defunct Weapon Plus project. Noh-Varr sought out Wolverine and together the pair travelled to The World, only for Logan to immediately fall under the mind control virus released by the now sentient facility. The rogue Captain Marvel fled the hordes of mind controlled genetic experiments (and a savage Wolverine) and managed to shut down the facility with the help of debonair international thief (and Weapon XIII) Fantomex. Unfortunately for Noh-Varr, to shut the World down he had to make out with the facility’s giant exposed brain, to show they weren’t a threat. [Dark Reign: The List – Wolverine]

While he successfully managed to evade his former teammates in the Avengers, Noh was eventually captured by SWORD as part of their mass deportation of all extraterrestrials. However, this plot was part of coup by Henry Peter Gryrich and, when Abigail Brand seized back control of SWORD, all abducted aliens, including Noh-Varr, were returned to Earth. [SWORD #2, 5]

Whilst in hiding from Osborn, Noh-Varr desperately tried to contact the Kree Empire. Initially, he just wanted to leave the Earth, but he soon realized that what he really wanted was to stay and help mankind. Frustratingly for the young Kree, he didn’t know what humans wanted, so he regularly tried to reach the Kree for their guidance, with no response.

While striking a conversation with a young student at NYU named Annie, he was confronted by the Sentry, who planned to take Noh-Varr back to Osborn. Noh-Varr, however, had no intention of going back to the Avengers and used every piece of alien technology he had available to fight off the immensely powerful Sentry. Despite his valiant efforts, Noh was outmatched and, if not for Annie using one of Noh’s stray weapons on the Sentry, he would have been captured. 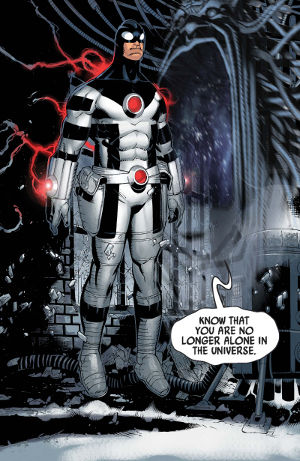 The young Kree fled to his hideout and tried to contact the Kree once more, and this time was surprisingly successful. The Kree Supreme Intelligence informed Noh-Varr that his valiant and heroic efforts had been observed and that they agree the Earth should be protected. It appointed Noh-Varr the Ruhi-Tugu, or Protector of Earth, and provided him with a set of nega-bands and a new costume. With this new upgrade to his abilities and a new mission to learn how to best help mankind. [Dark Avengers Annual #1]

Noh-Varr reconnected with Annie soon after and the pair soon started a romantic relationship. Whilst on a romantic getaway, the pair were confronted by a mysterious armored woman, apparently from the future. The attacker cryptically told Noh she was there to test him, physically and mentally, and attacked innocent civilians to push his abilities. In a rage, Noh knocked the woman’s mask off, revealing she was an older version of Annie. The older Annie promised Noh this would all make sense one day, before disappearing into the timestream. Noh chose not to tell his version of Annie about the attacker’s identity. [Ms. Marvel (2nd series) #50]