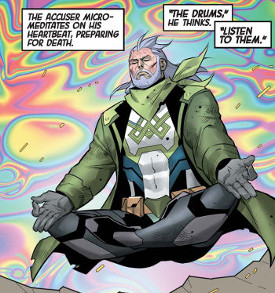 Five thousand years in the future, Noh-Varr the Accuser, and the last Inhuman Maximus, dwelled upon a ravaged Earth that had been devastated by the Progenitors millennia ago. In preparation for the return of the Progenitors. After travelling across the world, the pair revived an ancient and crystalline Inhuman Flint, dubbed the King of the Moon, to defend their planet. In the end, Noh-Varr was incinerated and the Earth destroyed, but the trio successfully save managed to prevent their future from ever playing out by sending the elder Maximus’ memories back in time to his younger self. [Royals #1-12] 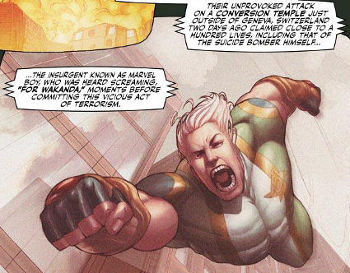 In a reality where the Skrulls won the “Secret Invasion,” the aliens were gradually supplanting humanity by convincing them to convert themselves into Skrulls. Noh-Varr was manipulated by Norman Osborne into blowing up a Skrull conversion temple in Geneva, to implicate the Avengers. [What If? Secret Invasion]

Whilst travelling the multiverse with the Young Avengers, Noh-Varr encountered various versions of himself. Some were extremely different, like a giant monstrous Noh-Varr/Plex hybrid. Others were almost identical, like eyepatch Noh-Varr, and some were just plain weird, like a Noh-Varr that was half-wood.