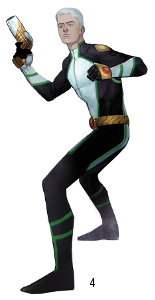 1) As an ensign on The Marvel, Noh-Varr was issued with a uniform that consisted of a single, green and white, short-sleeve body suit, cut off at the thighs, golden gauntlets that morph into pistols, a gold belt and green and gold boots. On his shoulder and chest were golden emblems of the Kree military.

2) As Captain Marvel, Noh’s costume was very similar to his ensign uniform, though gone were the shorts.

3) As the Protector, Noh-Varr issued with a uniform by the Kree Supreme Intelligence. The uniform was black and white full body suit, consisting of a black cowl with prominent white goggles and an open mouth, matching twin red circles on his chest and belt and white nega-bands on his wrists.

4) After falling out with the Kree and losing his title as Protector, Noh-Varr adopted a full bodysuit with black coloring running up both sides, black arms and legs, and a white strip down the middle accentuated by green striping. Once more, he donned the golden gauntlets that transformed into pistols, which matched the emblems on his shoulders, along with his belt.