Mar-Vell of the Kree was born in the city Rad-Nam on Kree-Lar, capital of the interstellar Kree Empire. Not much is known about his early history. Mar-Vell was a "Pink Kree", a Caucasian equivalent among his people caused by genetic drift from the original "Blue Kree" skin color. Although Pink Kree were more populous in the Kree Empire at present, they were still looked down upon by the more traditional Blue Kree minority factions.

His mother was a highly decorated military officer while his father was a starship designer who worked on improving lightspeed engines. Mar-Vell was enrolled in the Third Nor-Eastern Regional Military Academy as a child. His mother was assigned as military liaison to his father's lightspeed project, and the last time he saw her was when she dropped him off at the academy. She told him to be brave and be strong, words he remembered throughout his life. Mar-Vell saw little of his parents after that, but he often studied the ship schematics his father sent him in correspondence, as a way of staying close to him. When his parents died during the lightspeed project, Mar-Vell was fully raised by the military state. Mar-Vell held the honor of being the youngest officer in the history of the Kree military. [Captain Marvel (1st series) #11, 15, Untold Legend of Captain Marvel #2-3] 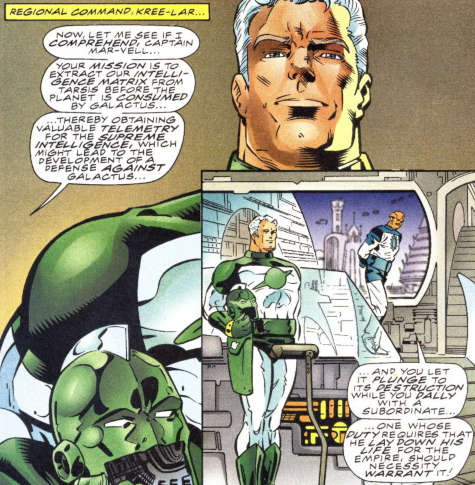 As he rose in the ranks to become Captain Mar-Vell, his military record was exemplary...mostly. Mar-Vell was decorated three times, received the Star Cluster medal for his actions in Sub-Galaxy NGC 205, and was widely recognized as "the People's Hero". But on the occasions when military objectives clashed with the safety of his troops or innocent lives, Mar-Vell's instincts were decidedly Un-Kree. His impulse was to prioritize life over duty, something which frusterated his commanders to no end. After saving a hapless lieutenant instead of an intelligence matrix on Tarsis during a mission to gather data on Galactus, Mar-Vell was reassigned to the Pama under Commander Zen-Pram and his second, a Colonel Yon-Rogg. 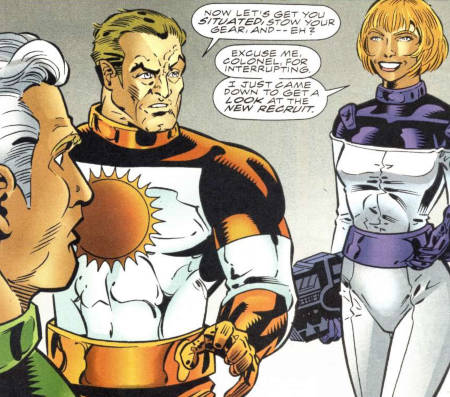 Aboard the Pama, Mar-Vell came to the attention of Medic Una. Una was a maverick among the Kree for practicing the scorned field of medicine, widely believed to be fit only for those unworthy of combat. In fact, Una saw herself as a true Kree warrior on the front lines of a war for life itself, preserving the Kree Empire by defeating disease and saving Kree lives rather than killing enemies. She had read the report on Mar-Vell's actions on Tarsis and saw a kindred spirit, despite his initial protestations.

The Pama was dispatched to Absolom Sector on a secret mission to locate the missing flagship of Admiral Devros and either rescue the veteran Kree or ensure his high-ranking intelligence did not fall into enemy hands. Mar-Vell and Una grew closer over the long voyage despite the jealousy of the posturing yet impotent Colonel Yon-Rogg. The journey proved eventful as the Pama battled the Skrulls and rescued a Shi'ar envoy craft with Regent Deathbird. They also learned the fate of Devros's flagship...an encounter with a Brood Acanti space whale.

When Mar-Vell and the Pama located the crashed flagship, they also found Devros, partially transformed into a new member of the Brood hive. The crew were all infested with Brood eggs. Captain Mar-Vell managed to break his restraints and began freeing the crew, but reinforcements forced him to flee with Una alone to avoid recapture, despite Yon-Rogg's pleas. Mar-Vell got Una to sick-bay to work on a cure for their infestations, while he disabled the ship to prevent Devros from returning to Kreespace with his Brood allies. He used his father's knowledge of starships to destroy the Pama's engines, defeated Devros, and was forced to kill a fully transformed Commander Zen-Pram. 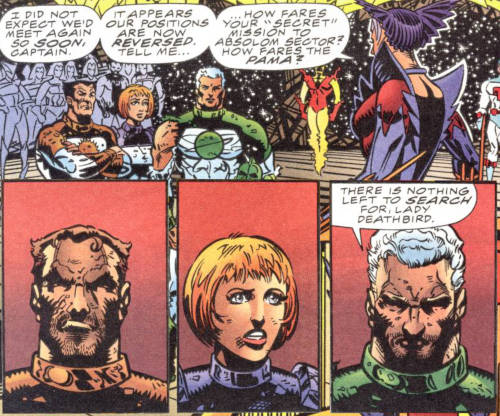 Una succeeded in concocting a radiation treatment to kill the Brood embryos inside them, and the pair prepared to jettison sick-bay away from the Pama before it exploded, wiping out the rest of the Brood. Moments before, however, Mar-Vell spotted Yon-Rogg, badly wounded but having freed himself and making his way towards the ship. Despite the risk and his disdain for the man, Mar-Vell raced the countdown to fight through the Brood and rescue his superior officer before blast off. After three weeks of isolation in close quarters inside the sick-bay / escape pod, Mar-Vell, Yon-Rogg and Una were rescued by the Shi'ar and brought back to Kreespace. As seniormost surviving officer, Yon-Rogg was given the credit for their success.

A bitter relationship now existed between the captain and the colonel. Yon-Rogg felt he had saved himself from the Brood after Mar-Vell abandoned him in the hive, despite Mar-Vell's last minute efforts. Una now clearly loved Mar-Vell, and Yon-Rogg also knew the accolades he received from high command were from Mar-Vell's actions, and Mar-Vell's silence. Yon-Rogg's personal and professional jealousy made him nearly mad, and he longed to eliminate Mar-Vell and perhaps even claim Una as his own afterwards. When Yon-Rogg was given command of his own ship and Mar-Vell and Una were assigned to work under him, all three knew it would be an unpleasant tour of duty. [Untold Legend of Captain Marvel #1-3]

The otherwise backwater planet Earth came to the attention of the Kree Empire after a series of incidents. The Kree Sentry #459 was unearthed on the planet from an ancient survey mission, only to be defeated by adventurers known as the Fantastic Four. When Prime Accuser Ronan traveled to Earth to judge the Four, they rebuffed him as well. Somewhat daunted, the Kree Empire decided a more discreet and long-term reconnaissance mission was necessary to determine the potential threat Earth posed to the empire. 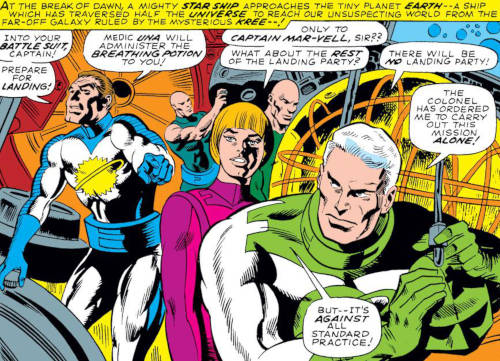 Captain Mar-Vell and Medic Una were among the crew of the Helion with Colonel Yon-Rogg assigned to this mission. When the Helion arrived in Earth space, Yon-Rogg declared that Mar-Vell alone would be sent down to the planet as a scout, instead of a full team as dictated by regulations. Mar-Vell and Una understood Yon-Rogg's true intentions, but could do nothing to defy their commanding officer. Captain Mar-Vell set down near Cape Canaveral, but his arrival upset a delicate missile guidance system being tested, inadvertently alerting the authorities to his presence. After narrowly avoiding a military patrol, Mar-Vell arranged residence at a nearby hotel while posing as a human. He had not prepared a human alias in advance, and unthinkingly signed into the guest book as "C. Marvel." After securing his hotel room, Mar-Vell was contacted by Yon-Rogg and remotely implanted with a wrist monitor, enabling his commander to constantly monitor his subordinate's activities in the field (as well as giving Yon-Rogg a degree of control over Mar-Vell, even at a distance). [Marvel Super-Heroes (1st series) #12]

Mar-Vell's military helmet could process Earth's atmosphere for him so long as he was wearing it, but to move unobtrusively among humanity he needed a supply of the Kree breathing potion, which he had to take once an hour when his helmet was off. Needing a fresh supply, he arranged for a rendezvous with the Helion. Yon-Rogg plotted Mar-Vell's death, however. He intended to "misfire" the Helion's laser weapons as Mar-Vell flew up to greet them, blaming the captain's death on a tragic "accident." As fate would have it, though, a small, one-man plane happened to fly in-between the captain and the Helion at the crucial moment. The plane was destroyed and the explosive backwash only threw Mar-Vell for a loop instead of killing him. Fully aware of what had just transpired and why, Mar-Vell nonetheless was loyal to his mission and continued on, regardless of the treachery of his commander. Una managed to beam down a new supply of breathing potion for Mar-Vell, despite Yon-Rogg's efforts.

While surveying the crash site of the private plane, Mar-Vell found the pilot dead. His personal papers identified him as Doctor Walter Lawson, a missile system and robotics expert bound for 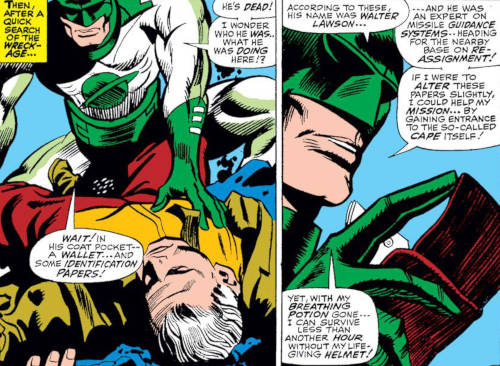 Cape Canaveral. Seeing an opportunity, Mar-Vell altered the records for Lawson and assumed his credentials to infiltrate the Earth base. As Lawson, Mar-Vell was given direct access to Earth's top secret and most advanced ballistic and weapons technology. He studied the fledgling civilization's efforts to improve itself and made notes for his report back to the Kree Empire over the following week.

With 709 Issue Summaries online, chances are you may not have read the following Issue Summary: