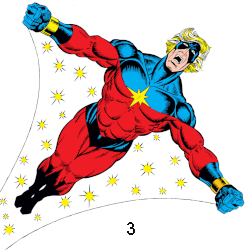 1) Mar-Vell wore a traditional uniform for the Kree military, which was mistaken for "Captain Marvel's" super-hero costume by the people of Earth. The primary uniform color is white, with the secondary color signifying his rank. As a captain, his boots, gloves, trunks, belt, shoulder trim and finned helmet were green. He also had a ringed planet symbol on his chest that resembled Saturn, but was actually the Kree homeworld of Hala. [Marvel Super-Heroes (1st series) #12]

2) The Supreme Intelligence granted Captain Mar-Vell a unique uniform in recognition for saving his life. This red suit came with blue trim around his chest and shoulders, extending up into a blue face mask that was open at the top, letting his silver hair show. It also had blue trunks, boots and gloves. The original suit also had golden bands around the wrists even before Mar-Vell adopted his Nega Bands atop them. Finally, a large yellow starburst was emblazoned on his chest. It first appeared as a sixteen-pointed star, although subsequent artwork would reduce the complexity of the design. [Captain Marvel (1st series) #16]

3) When he was chosen by Eon to become Protector of the Universe, Captain Marvel's silver hair became naturally blond and his costume underwent minor cosmetic changes. His chest symbol was officially redesigned as an eight-pointed design, later designated the "Hala star" of Kree cultural significance. His blue trunks became somewhat smaller as well, and his boots now had a tip in the front. [Captain Marvel (1st series) #29]