Simon Williams grew up as the second son of Sanford and Martha Williams. Simon idolized his older brother Eric, despite Eric's tendency towards acting out, leading to a growing cruelty towards

people and animals. Sanford was a brilliant innovator who ran his own business as Williams Manufacturing, but as a father he could be brutal towards Simon and Eric. As Eric became increasingly volatile in response, Simon retreated inwards as a bookworm and grade-'A' student in the hopes of pleasing his disapproving father. [West Coast Avengers (2nd series) #2, Uncanny Avengers (1st series) #9]

After Sanford passed away, Simon continued to be the "good son" and took over Williams Manufacturing & Innovations, while Eric began a life of crime as part of the Maggia. Despite their drastically different life trajectories, Simon and Eric remained on relatively good terms. Williams Innovations initially prospered under Simon's leadership. His innovative mechanics kept the company in the black until Stark Industries began to overtake them. Stark was not deliberately competing with Williams; the two companies just happened to be producing in the same field. The company began to crumble after that, as it became clear Simon was a better inventor than businessman, and couldn't course-correct the company after the initial setbacks.

As the head of Williams Innovations, Simon embezzled money in order to make ends meet. His

criminal activities were discovered and he was arrested. His bail was made by Amora, the `Asgardian Enchantress, who had a proposal for him. Amora proved highly convincing, and Simon accompanied her to South America to meet with Baron Zemo and the Masters of Evil. Zemo and Amora played on Simon's emotions, feeding him the idea that Stark Industries was responsible for manipulating the market and causing Williams Innovations to fail. They offered Simon the chance to get even with Tony Stark and his friends, Iron Man and the Avengers.

Zemo had masterminded the creation of an ionic bombardment process that harnessed a divergent form of Pym Particles to increase the strength and durability of organic tissue. Simon 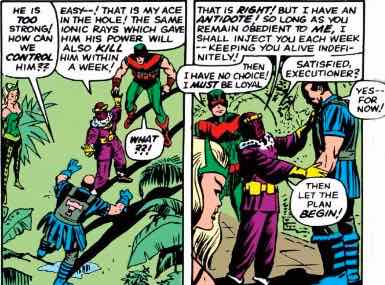 submitted to the procedure and quickly felt his cellular structure swell with ionic energy, increasing his musculature and causing his eyes to glow with ionic power. Only after the procedure was complete did Zemo tell Simon the ionic process was fatal and would kill him in one week if an antidote was not administered as well. Faced with both the carrot and the stick, Simon was now firmly under Zemo's control. He was given a costumed identity as Wonder Man, outfitted with miniature recording lens so that Zemo could also monitor him for betrayal.

Putting their plan into motion, the Masters of Evil attacked New York City, drawing the attention of the Avengers so that Wonder Man could appear and help foil the villains, earning the Avengers' trust. Simon introduced himself to the Avengers as a new super-hero and told them an edited version of his situation. After hearing that he was dying, the Avengers leapt to Wonder Man's aid, putting their various medical and scientific minds to the study of his deteriorating condition. In the meantime, Wonder Man was considered for full membership in the Avengers, with a vote likely to be held at the next meeting. 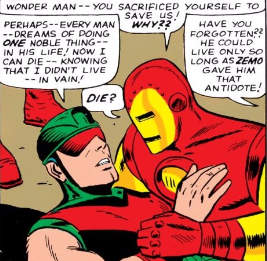 Once he had earned their trust, Wonder Man kidnapped the Wasp and radioed the Avengers to come to South America and help him rescue her from the Masters of Evil. The Avengers individually fell to Wonder Man's treachery when they arrived, and the Masters quickly gained the upper hand. After hearing Zemo planned to murder the Avengers, instead of merely holding them captive, Wonder Man decided to turn against the Masters of Evil. He freed Thor and gave the other Avengers time to recover before being blasted by Zemo's ray machine. Dying from the ray blast and Zemo's treatment, Wonder Man apologized to the Avengers before he seemingly passed on. [Avengers (1st series) #9]

Unfamiliar with Wonder Man's unique ionic physiology, the Avengers kept him specially preserved in a glass coffin, and Giant-Man made a copy of Simon's brain wave patterns for study. The Avengers mourned Wonder Man as a fallen comrade and believed his story was done. Unknown to everyone, Wonder Man was not actually dead. The ionic energy had triggered a radical transformation in his cellular structure, and Simon fell into a death-like, comatose state. As he lay lifeless and inert, his body went through a chrysalis process and slowly evolved into a new kind of lifeform.

During his time dormant, Wonder Man was not completely absent from Avengers adventures. His brain wave patterns were stolen by the robot Ultron to create the basis for the mind of his new synthozoid, the Vision, who later joined the Avengers. [Avengers (1st series) #58] Simon's body was stolen by his brother Eric, who blamed the Avengers for his death and created a super-villain identity as the Grim Reaper to seek revenge on them. The Grim Reaper once offered Simon's

preserved body to the Vision as a possible human body for him to inhabit. [Avengers (1st series) #108] Finally, a version of Wonder Man appeared in Limbo as part of Kang's Legion of the Unliving, although it was likely just a Space Phantom mimicking Simon's appearance. [Avengers (1st series) #131] After returning to life, Simon remarked that he had no recollection of working with the Legion. [Avengers West Coast #50]

Simon's return to life started in a rather horrific manner. In his continuing efforts to torment the Avengers for letting his brother die, Eric made contact with the houngan of New Orleans, Black 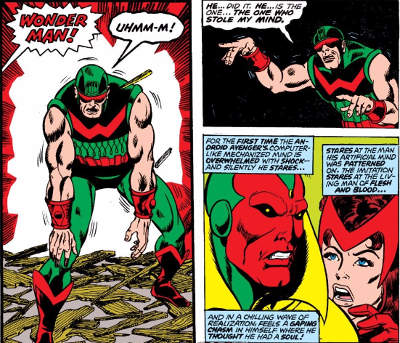 Talon. He had Simon's "dead" body reanimated as a zuvembie using the Talon's voodoo magic, creating a grotesque mockery of life. Eric then mailed Simon's active but unliving form to the Avengers in New York. In a spectacular twist, the crate arrived at Avengers Mansion the same day the team was announcing their new roster on the front lawn. The commotion apparently stirred zombie Wonder Man into action, for he broke free from the crate and shambled towards the Vision. With a voice like the grave he pointed and repeated "He did it... he is the one... the one who stole my mind." over and over. [Avengers (1st series) #151]