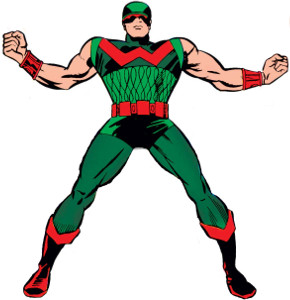 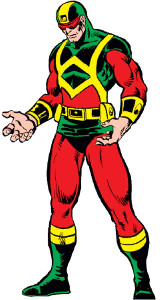 1) Wonder Man's first costume was a sleeveless green body suit with a large red 'W' on his upper chest and swirling infinity symbols adorning his lower body. He wore a red belt, wristbands and boots. A green cowl covered all of his head except his face, combined with a bright red visor. [Avengers (1st series) #9]

2) Designed by the Beast, Wonder Man's second costume is often considered one of the worst of all time. The basic green of his body suit remained, but with red sleeves and leggings. His boots swapped to green, with gold trimming to the top of the boots, his wristbands and his belt. An extremely large 'W' and 'M' rested atop each other in a stylized design on his chest. His cowl now also had a gold stripe down the center. [Avengers (1st series) #161]

3) Wonder Man decided to avoid a traditional super-hero uniform after that, switching to a red leisure jacket worn over typical black pants and a turtleneck. He continued using smoked red sunglasses in place of his visor to hide his glowing eyes. [Avengers (1st series) #167]

4) As his confidence grew, Wonder Man adopted a more super-heroic look again. Similar to his original uniform in different colors, Simon wore a sleeveless blue-black body suit with a red 'W' on his chest, red belt jets, and boots, along with gold wristbands. [Avengers (1st series) #253] 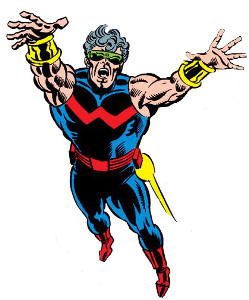 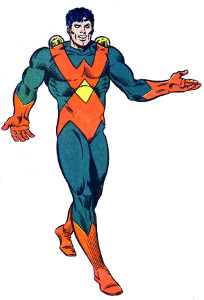 5) Simon's Hollywood contacts decided to update his costume, but unfortunately they used his second uniform as a template. This lime green body stocking had an enlarged 'W' and 'M' running down his body, connecting with a yellow diamond in the center of his gut. He wore red gloves and boots along with a gold jet pack in place of his belt jets. Simon also decided to avoid a mask or goggles, letting his red eyes show for the first time. [West Coast Avengers (2nd series) #12]

6) Hollywood quickly decided they hated the costume they had insisted he wear, so Simon went back to a slightly modified version of his previous costume. This suit included a larger 'W' on his chest, red wristbands instead of gold, and more of a tank-top shirt design. [West Coast Avengers (2nd series) #25] 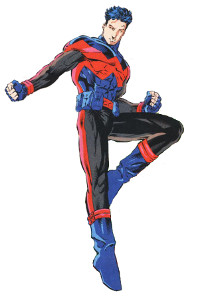 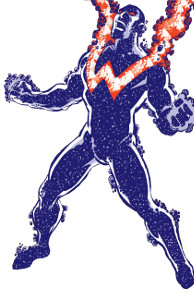 7) After a series of personal crises, Simon adopted a much busier version of his costume. This look included blue boots, fingerless gloves, and body suit contrasting black sleeves and leggings. His red 'W' also extended further around his chest, connecting with red stripes down his legs and a 90's belt adorned with pouches and an infinity symbol on his buckle. [Wonder Man #25]

8) When Wanda restored his physical form, Wonder Man appeared as a crackling energy being radiating ionic power. His bled purple-black ionic plumes from most of his skin, with his traditional red eyes and a red 'W' across his chest. [Avengers (3rd series) #2]

9) Once he was restored to life, Simon could power down his energy form again, giving him a typical costume as well. He wore a black short-sleeved body stocking with red stripes on his boots and wristbands, as well as red highlights on his sides and shoulders. [Avengers (3rd series) #12]

--) Over time, Wonder Man began wearing his leisure suit jacket again, sometimes belted up like it was originally worn, other times worn atop his classic West Coast-era look. Simon could now control his ionic form so he appeared "charged" or not at will.

10) After taking an aggressive stance against the Avengers' existence, Wonder Man adopted a slightly modified version of his classic costume, which included red bands around his upper arms and thighs. [Avengers (4th series) #2]