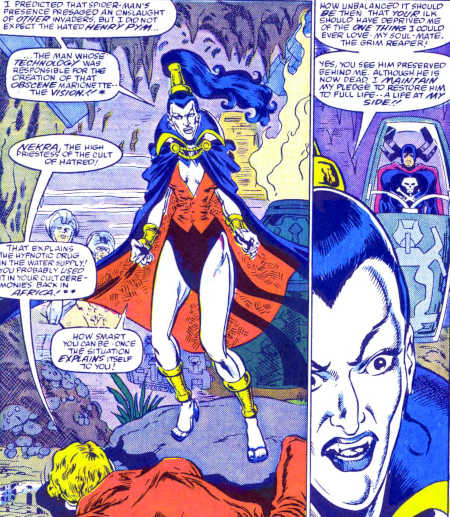 Nekra retained control of Adrienne Hatros’ property and eventually opened another clinic at Shriver Cove, Cape Cod, Massachusetts, where she began polluting the local water supply with a drug making people raving and hateful. Spider-Man and Hank Pym were drawn into a fight with her. Nekra deeply hated Pym for creating the Vision, the ‘travesty’ of the Reaper’s brother, but even so, she wasn’t a match for the two heroes and ultimately fled. [Web of Spider-Man (1st series) #46]

Sometime later, the mystical being known as Llan the Sorcerer began summoning various villains to Canada and Nekra was among those who felt the call. Not consciously aware of the summoning, Nekra believed her coming to Canada was in response to the Superhuman 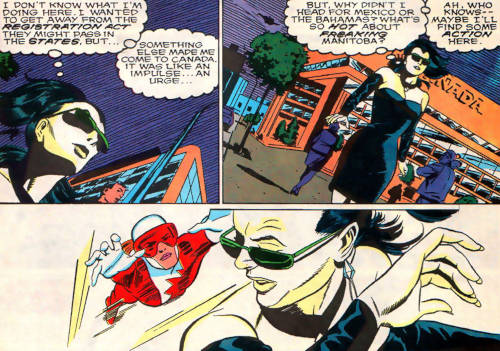 Registration Act that was soon likely to be passed soon. Alpha Flight’s Vindicator tracked her down and attacked her on the streets of Winnipeg, trying to force her to leave the country. The various villains summoned by the Sorcerer succeeded in banding together. It took the abilities of another member of Alpha Flight, Witchfire, to break their possession by the Sorcerer and put them to sleep. [Alpha Flight (1st series) #79-80]

Returned to the United States, Nekra ended up being incarcerated in the maximum-security prison for supervillains, the Vault. [Avengers Spotlight #29] While in prison, Nekra had a one-night stand with her fellow inmate, Mister Hyde. During a major breakout, Nekra and 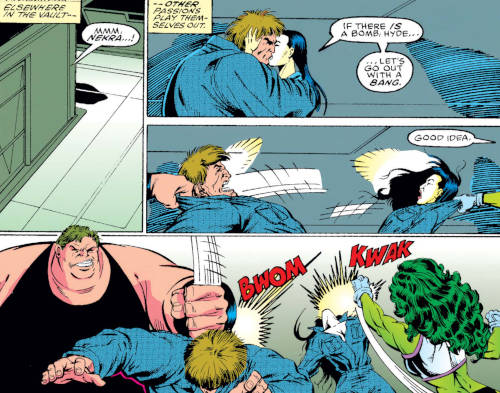 Hyde took some private time together to kiss, in view of the fact that a time bomb had been planted in the Vault and perhaps these were their final moments together. Nekra and Hyde were interrupted by the Avengers and the Freedom Force, who had infiltrated the Vault and were trying to get things under control again. When interrogated about the plans of inmate Venom, Nekra simply spat in contempt, causing Blob to almost choke her in retaliation. [Marvel Graphic Novel #68 / Avengers: Deathrap: The Vault]

The brief taste of romancing Nekra had in prison probably made her nostalgic of the Grim Reaper and, once she was free, she set about to resurrect him using voodoo once again. When he emerged alive out of the cemetery where he was buried, Nekra proclaimed that the kiss he had 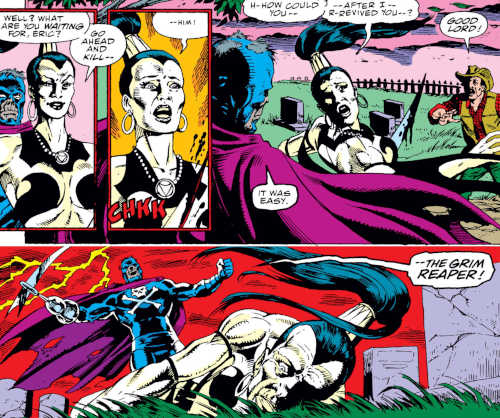 given her when he had last died in her arms had made her realize she loved him. The only thing required of him to remain alive was to claim at least one human soul with his scythe every 24 hours. Unflinchingly, Grim Reaper stabbed her through the heart and drained her life-force. With her dying breath, Nekra wondered why he chose her as his victim, considering she was the one who had brought him back from the dead. Mandrill went after the Reaper to avenge Nekra but was also slain. [Avengers West Coast #65-66]

But now it was Nekra’s turn to taste reanimation. Hellstorm resurrected her and gave her the task of seducing the arrogant Doctor Druid, who sought to cause mayhem with his use of forbidden magic. Nekra regained control of her cult of Kali and contacted Doctor Druid in New York. She claimed that a few white men had infiltrated the chapel of her cult in California and pilfered several 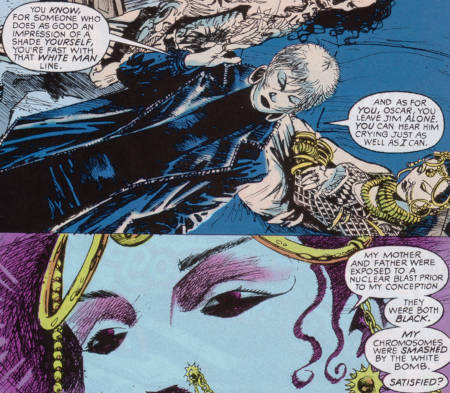 corpses, which they intended to defile. Druid, who was instantly taken with her, promised to help. Baby Icon, a clairvoyant living with Druid, was less impressed with her story and couldn’t help but bring up that Nekra herself was, strictly speaking, ‘white.’ Once again, Nekra clarified that she identified as black, stressing that both her parents were black and that her own “chromosomes were smashed by the white bomb” after her parents had been exposed to a nuclear blast. When Druid indeed proved himself to be a threat to the world, Nekra killed him at Hellstorm’s behest. [Druid #2-4]

Nekra was later taken into S.H.I.E.L.D. custody, only to escape again. She began donating her own genetic material to a Mutant Growth Hormone ring in order to make a living. Her new plans were foiled by the superheroes known as Loners, even though she proved strong enough to take on the entire team on her own. [Loners #1, 4-5] Sometime later, Nekra reconciled with the love of her life, Grim Reaper. Reaper recruited various criminals in his plan against Norman Osborn, who had recently ascended to power as head of H.A.M.M.E.R. Nekra was once again smitten with the Reaper and was more than happy to do his bidding as part of his reformed Lethal Legion. However, also part of the team was Mister Hyde, who kept flaunting his onetime sexual dalliance with Nekra. Reaper’s jealousy put a strain to his already uneasy relationship with Nekra.

Eventually, the team stormed into Oscorp, Osborn’s corporation, but were double-crossed by one of their own and were locked up in The Raft, another prison for superpowered criminals. Soon afterwards, the Reaper was seemingly murdered in his prison cell, leaving Nekra once again devastated. When asked by her lawyer how she could grieve for Reaper, a man who had once murdered her, Nekra clarified that she knew he was no good for her but she loved him

nevertheless and accepted his instability. She was determined to always come back to the man she considered her soulmate. Unbeknownst to Nekra, Grim Reaper was the traitor who had double-crossed them. He had conspired with Osborn, who brought him back to life using voodoo, and he was assigned to build a new power base for Osborn in Europe. The Reaper momentarily expressed regret for once again betraying Nekra, but Osborn assured him there was no other way for their ruse to work. [Dark Reign: Lethal Legion #1-3]

Now going solo again, Nekra became more interested in her own status as a mutant and the responsibility that went along with it, especially now that she was one of the very few mutants on Earth who had retained their powers post-M-Day. She came back to San Francisco, seeking refuge on the island of Utopia, but soon found herself among hundreds of people violently protesting in the streets against a new proposed legislation regulating mutants’ reproductive 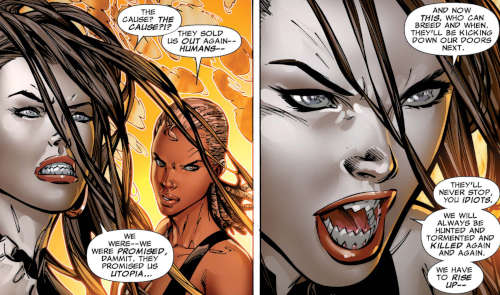 rights. During the riots, Armor scolded Nekra for her aggressive behavior, telling her she was doing the mutant cause a disservice, to which Nekra countered they should finally rise up against humans and their endless persecution of mutants. Just then, Nekra was attacked by Ms. Marvel a.k.a. Karla Sofen, a member of Osborn’s Avengers sent there to dispel the crowds.  Nekra later took her revenge by taking Karla out together with Frenzy and Bling! [Utopia crossover]

Nekra and Frenzy became good friends while fighting alongside each other. Probably feeling restless, they later burned down the San Francisco Museum of Modern Art, protesting the fact that an artist whose work was exhibited there systematically exploited his models. Proving themselves enforcers of law and order as well as mutants’ rights, X-Men’s Northstar and Dazzler showed up and both Nekra and Frenzy were taken into custody. [Uncanny X-Men (1st series) #528] In Ryker’s Island prison, Nekra once again began studying the dark arts. By now, she was a magic/voodoo enthusiast and freely shared her knowledge with others. She happily shared information with her cellmates, White Jennie and Black Mariah, on a powerful magic artifact, the Supersoul Stone, and even taught Jennie the incantations with which she could control the Stone. [Power Man and Iron Fist (3rd series) #2, 4]

During the Chaos War event, Grim Reaper and Nekra, along with her cult of Kali, allied themselves with the Chaos King and fought several Avengers who had been brought back to life. Nekra confronted Doctor Druid, who understandably still hated her for once deceiving and 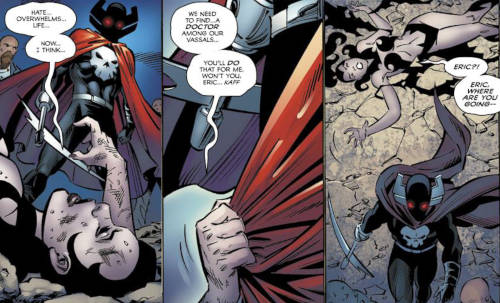 murdering him. After Nekra was seriously injured in a battle against Deathcry, she asked the Reaper to call a doctor for her. However, he ignored her pleas, once again proving he didn’t care for her as much as she did for him. The couple was brought to another untimely end when they were both caught in an explosion caused by the Vision’s voluntary self-destruction. [Chaos War: Dead Avengers #1-3]

Given their track record with death and resurrection, both Nekra and her ungrateful lover are bound to turn up alive in the future.

A young villainess called Death Reaper has since appeared, claiming to be Nekra’s daughter, although she also claims not to know the identity of her father. [Dark Reign: Zodiac #1]

With 693 Issue Summaries online, chances are you may not have read the following Issue Summary: