Nekra Sinclair was born in 1946 in Alamos, New Mexico, the daughter of African-Americans Buck and Gemma Sinclair. Her mother worked as a cleaning lady at the Los Alamos National Laboratory, one of the earliest US atomic research facilities. In 1944, Gemma and a Caucasian scientist, Frederic Beechman, absorbed massive doses of radiation when an explosion breached the facility’s nuclear pile due to some fault in the electrical wiring. One year later, Frederic’s wife gave birth to what was conspicuously a mutant baby boy, with black skin and tufts of hair, who 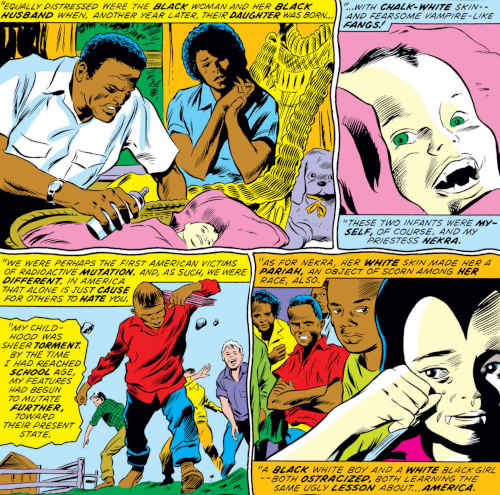 gradually acquired an ape-like appearance. A year after that, Gemma gave birth to a mutant baby girl with an equally startling appearance, sporting chalk-white skin and vampire-like fangs. As expected, the two children, the boy, Jerome, and the girl, Nekra, had an extremely difficult childhood due to their unusual physical appearance, being routinely bullied by their schoolmates. As an albino, Nekra was further ostracized, being seen as neither black nor white.

When Nekra was about fourteen, she ran away from home, her everyday life being a nightmare at this point. While wandering in the desert, she happened upon Jerome, who had been abandoned there by his parents without any food or water, seemingly to die. Nekra offered him water and immediately the two bonded and became inseparable partners, regarding each other as siblings. It is also likely that Nekra was instantly attached to Jerome, due to his powers of pheromone manipulation. The duo decided to live a nomadic life, forever on the move and shunning all other individuals.

Over the next six years, Nekra and Jerome educated themselves by eavesdropping outside 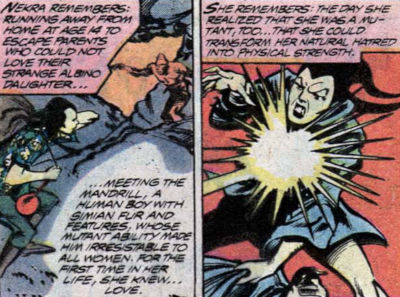 schools and stealing books to read. One night, outside a town in Missouri, they were attacked by a mob of locals whose children had warned them of the two ‘monsters’ lingering outside the school. Nekra was overcome with hatred for their attackers and, when shot by one of them, proved to be nigh-invulnerable. It was then and there that she realized her mutant power: if she worked up sufficient hatred, she could metabolize her emotions into physical strength and invulnerability. Working together, Nekra and Jerome slew their attackers. [Daredevil (1st series) #110, Spider-Woman (1st series) #16]

[Note: In Daredevil (1st series) #110, Mandrill was mentioned as being ten years old when he met Nekra in the desert, which would make her nine at the time. Spider-Woman (1st series) #16 mentions her as being fourteen at the time, which seems a more likely age for someone to run away from home]

Eventually, Nekra and Mandrill – the codename Jerome adopted for himself – also became

partners in crime. Using his powers of pheromone manipulation, Mandrill was able to attract and enslave several women, all of whom became his fanatical followers and were recruited as soldiers in his Black Specter organization. The women’s collective hate-energy in turn fueled Nekra’s own powers.

Several years later, Mandrill conceived an ambitious plan which involved the overthrow of three African countries, with Mandrill seizing control of them and creating a utopian country, as an alternative to what he saw as the corruption of the United States. In Western Africa, Mandrill’s plans were foiled when he was defeated and captured by Shanna the She-Devil, whose father he had abducted. Shanna and her friend, Patrick McShane, also captured Nekra, but even at gunpoint Nekra refused to reveal where Shanna’s father was being kept. Ultimately, Nekra managed to escape after murdering Patrick with her bare hands. Shortly afterwards, Mandrill also escaped. [Shanna the She-Devil #4-5, Daredevil (1st series) #111]

Mandrill and Nekra reunited and came up with a new plan: the overthrow of the US government. In San Francisco, Nekra captured Black Widow, hoping to use her as a slave in Mandrill’s army, and was also involved in a fight against Daredevil and the Thing. After blackmailing the US government by threatening to detonate an atomic bomb in New York, Mandrill was offered what he coveted most. Settling himself in the Oval Office of the White House together with Nekra, Mandrill had a brief taste of his triumph, being before attacked and defeated by Daredevil, Shanna and Black Widow. Even though Mandrill fled, Nekra was taken into custody after losing her concentration, which was necessary for her in order to maintain her hate and thus her superhuman strength. [Daredevil (1st series) #110-112, Marvel Two-In-One #3]

Nekra was confined in a SHIELD prison and spent months in a drug-induced stupor which kept her from hating, doing nothing but watching television. One day, however, she watched a news report of a rally held by the villain Hate-Monger at the Yonkers Stadium. The broadcast had been engineered to send waves of emotion through the screen. Finally energized, Nekra was able to overcome her stupor and escaped prison. Now resentful of her old partner for abandoning her, 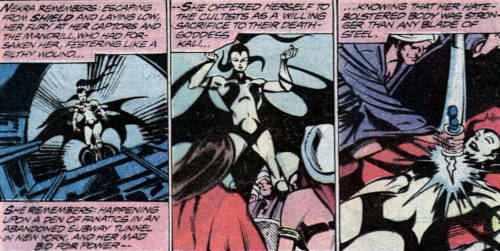 Nekra hid in an abandoned subway tunnel in New York, where she came across a cult of followers of Kali, goddess of death. Nekra offered herself as a sacrifice to the cultists, knowing fully well that her hate would make her invulnerable and thus no knife could pierce her flesh.

Upon seeing this, the cultists considered it a miracle and Nekra claimed she was the goddess Kali incarnate, who had been sent to lead them. Indeed, she became the new high priestess of the cult after having the other priestesses sacrificed as a proof of the cultists’ loyalty to her. Together with her worshippers, she moved back to San Francisco, where she had Adrienne Hatros, the owner of a clinic on emotional research, murdered and usurped her identity, intent on using the clinic as a front for her own purposes.

In the clinic, Nekra became extremely interested in the unique case of Jessica Drew, a.k.a. Spider-Woman. Jessica emitted pheromones, which often repelled other people around her but had the exact opposite effect on Nekra. Jessica was the only person Nekra had ever met, apart from Mandrill, who did not generate feelings of hate and disgust in her, but rather love and affection. Nekra was curious to find out why this was the case and had Jessica studied by her 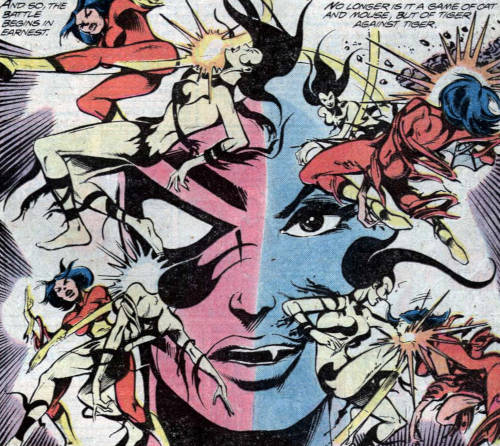 scientists. After having Jessica analyzed for a few weeks, Nekra created a pill which gave her immunity to Jessica’s pheromones. Nekra decided to test the drug and invited Jessica to Hatros’ mansion. There, the two women fought brutally as Nekra was, indeed, no longer susceptible to the pheromones. In the end, though, the effects of the drug began to wear off and, no longer able to hate Spider-Woman, Nekra was knocked unconscious. [Spider-Woman (1st series) #13-16]

Several months later, Nekra and Jessica were reunited under very different circumstances, when they were both kept prisoners by the man known as Locksmith, who had set out to capture various heroes and villains alike. Thanks to Spider-Woman’s efforts, they broke free. [Spider-Woman (1st series) #50] 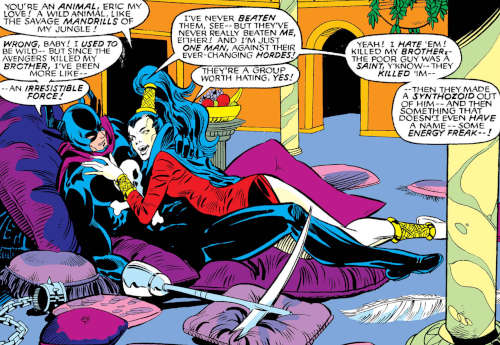 Man and the Vision as walking travesties of his ‘late’ brother. On one occasion, the Reaper went on a racist rant against his teammate, Man-Ape, calling him a ‘black savage.’ On witnessing the Reaper’s bigotry, Nekra was confused as to why he didn’t also hate her, even though she was also black. Grim Reaper insisted she was white, to which she retorted she was actually albino. Grim Reaper held to his position and the two locked lips. Distressingly enough, Nekra didn’t seem particularly disturbed by his racial slurs. The villains eventually fought and even captured the Avengers, but their plan ended in catastrophe when the Reaper fell to his death off a cliff. [West Coast Avengers (2nd series) #1-2, Vision and the Scarlet Witch (2nd series) #1-2]

Despite her earlier aversion to voodoo, Nekra was tutored into the black arts by the Black Talon, hoping to use them to bring the Reaper back to life. Ultimately, she succeeded, although there was one caveat: her reanimation spell would keep working as long as her subject was unaware of his resurrection. As such, she couldn’t reveal the truth to the Reaper about his own revival. Nekra and Reaper soon attacked Wonder Man once again. Nekra’s strength was impressive enough to match even Wonder Man’s but, when the Reaper found out he was a zombie, he withered away and died within a few seconds, leaving Nekra devastated. [Vision and the Scarlet Witch (2nd series) #12] Nevertheless, she preserved the Reaper’s body, hoping to resurrect him again in the future.

With 719 Issue Summaries online, chances are you may not have read the following Issue Summary: