Born in Paterson, New Jersey, Eric Williams was destined to be the black sheep of his family. Firstborn son of the abusive industrialist Sanford Williams, Eric and his little brother Simon were

often subjected to their father's brand of "tough love.” While Simon retreated into books and study as an escape, Eric grew up violent and cruel. He tortured small animals from a young age, and often tried to get Simon to join him. Simon's refusal didn't drive a wedge between the brothers -- instead, Eric relished in the idea of Simon being "the good son," using it as an excuse to be "the bad son" as much as he desired. [West Coast Avengers (2nd series) #2, Uncanny Avengers (1st series) #11]

When they reached adulthood, Simon took over their late father's work as Williams Manufacturing, while Eric became an enforcer for the Maggia. Simon's initial success as an inventor soon paled in comparison to Tony Stark's innovations, however, and Simon's lack of business acumen led to Stark Industries rapidly overtaking Williams Manufacturing and driving it to bankruptcy. Simon went down a dark path where he embezzled money from his own company and later fell in with Baron Zemo and the Masters of Evil. Zemo transformed Simon into Wonder Man as a pawn to use against the Avengers, but Wonder Man turned on the Masters at the last minute and died a hero saving the Avengers from Zemo. [Avengers (1st series) #9]

Furious and borderline insane over his brother's death, Eric swore revenge against the Avengers. He stole the specially-preserved body of Wonder Man from Avengers custody. He also somehow

made contact with the evil robot Ultron-5, who shared his hatred of the Avengers. Ultron provided Eric Williams with the equipment he needed to craft a costumed identity as the Grim Reaper, the specter of death haunting the Avengers. [Avengers (1st series) #160-161]

While preparing to strike against the Avengers, the Grim Reaper intercepted a radio broadcast from Captain America to the team, nominating the Wakandan hero T'Challa, the Black Panther, as his replacement in the team's ranks. Seizing the opportunity, the Reaper concocted a plan to kill the Avengers and frame their newest member for the act. Eric broke into Avengers Mansion shortly before T'Challa was due to arrive and launched a surprise attack on those present -- Goliath, Wasp and Hawkeye. With his opponents off guard, the Grim Reaper overwhelmed them with the power of his scythe. The weapon's coma-inducing effect allowed Eric to send his victims into a death-like state, their life signs all but imperceptible. Mere minutes later, the Black Panther arrived and was caught by S.H.I.E.L.D. agent Jasper Sitwell standing over the apparently dead bodies of the Avengers.

Although he was taken into custody, the Black Panther soon escaped the authorities and returned to Avengers Mansion, where he found the Grim Reaper hiding away inside. During their struggle,

the Reaper bragged about the Avengers' fate, which would soon become irreversible without the use of his scythe to undo the coma. The Panther and Reaper struggled over the scythe until Williams was accidentally impaled on his own weapon. The Black Panther took the weapon and rushed to the city morgue, where he used it to revive his comrades. The Grim Reaper wasn't as seriously injured as he seemed, however, and escaped before the Avengers could return. [Avengers (1st series) #52]

Months later, Grim Reaper made a second attempt on the Avengers' lives. He banded together several of the Avengers' former opponents (Swordsman, Power Man, Living Laser and Man-Ape) as the Lethal Legion. The Reaper placed a bounty on each Avenger's head, prompting the Legionnaires to compete for the capture of the various heroes. Man-Ape had the first successful win, defeating his nemesis the Black Panther. Grim Reaper insisted the Avengers be captured, not killed, so that they could all die together for his revenge. Even his fellow Legionnaires questioned the Grim Reaper's motives, pointing out that most of the active Avengers those days joined after Wonder Man's death, and played no part in it. Still, the Reaper insisted the Avengers as an organization were to blame for his brother's death.

After explaining his plans in front of the prisoner, the Reaper allowed Black Panther to escape long enough to radio his friends about where the Lethal Legion were going, in order to split up the 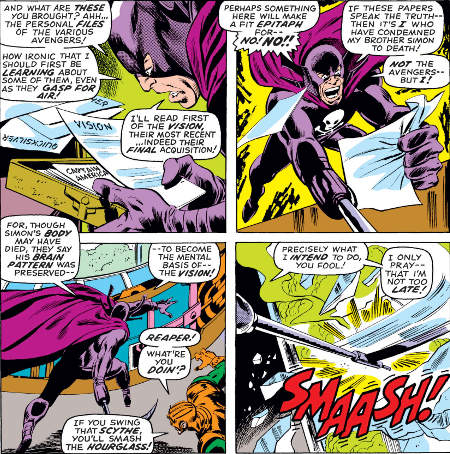 heroes. Captain America, Quicksilver, Goliath and Scarlet Witch were soon captured by the Legion as well. When Power Man seemingly returned with the Vision after ransacking Avengers Mansion, it appeared as if the Grim Reaper had succeeded. The Avengers were placed inside a transparent cage as lethal doses of gas were pumped inside. As the Reaper entertained himself by reading the Avengers' secret files taken from the mansion, however, he was shocked to learn the origin of the Vision. Although an android, the Vision's mind was based on the brain wave patterns of Wonder Man. The Grim Reaper flew into a panic, realizing that, if the Vision died, HE would be responsible for his brother's death, not the Avengers. Before the Lethal Legion could stop him, the Reaper smashed open the death trap and freed the heroes. The crazed Reaper was struck down by the Black Panther, and his Lethal Legion were turned over to the authorities. [Avengers (1st series) #78-79] 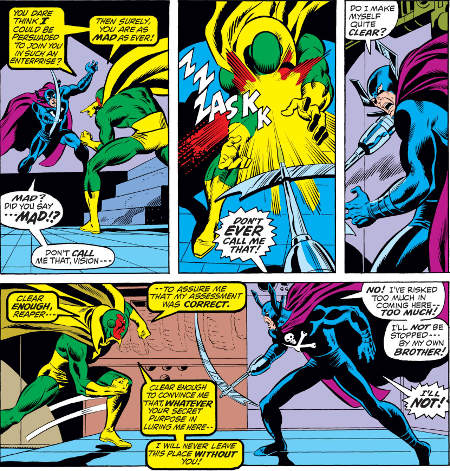 After escaping custody, Grim Reaper was contacted by the Space Phantom, who wanted a partner in the destruction of the Avengers. In exchange for Grim Reaper's knowledge of the Avengers' operations and security, Space Phantom agreed to use his technology to move the Vision's mind into a human body, thus bringing Grim Reaper's brother Simon Williams back to life (as far as the Reaper was concerned, at least). The Reaper privately approached Vision with this offer, trying to lure him into joining forces. Although Vision initially refused to trust him, Grim Reaper gave him time to think it over, as well as an amulet to contact him when he changed his mind. [Avengers (1st series) #102] 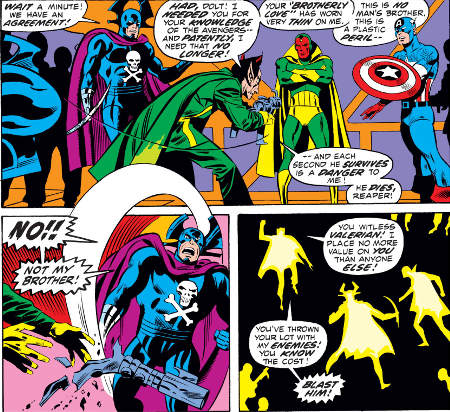 Captain America and then transfer Vision's mind into Cap's lifeless body. The Vision agreed this time, but Grim Reaper quickly learned it was only a ruse so that he and Captain America could rescue the other Avengers. Grim Reaper and Space Phantom confronted the Avengers, and the Phantom ordered his HYDRA soldiers to kill all the heroes, including Vision. Grim Reaper balked at this betrayal and began fighting against the Phantom alongside the Avengers. As the battle concluded, the Reaper had exhausted the power of his scythe and submitted to custody. [Avengers (1st series) #106-108]

The Grim Reaper's next plot was to haunt the Avengers with their crimes by bringing Wonder Man back as a zuvembie. Recruiting the voodoo houngan Black Talon for his cause, the Reaper had Simon's specially preserved body reanimated and delivered to the Avengers Mansion. During a ceremony celebrating the new Avengers roster, Wonder Man burst free of the crate in which he had been transported and began hauntingly accusing Vision of stealing his mind. [Avengers (1st series) #151-152]

Eric's macabre joke took a surprising turn when Simon actually did return to life -- not just the shambling half-life of a zuvembie, but full awareness and cognizance. Faced with the possibility that his brother really had come back from the dead, Eric's twisted mind could not accept that both

Wonder Man and Vision could be Simon Williams. Deciding that one must be an imposter of his real brother, and therefore must die, Grim Reaper broke into Avengers Mansion and took the Avengers present captive. He set up a mock trial scenario, with Black Panther as opposing counsel to determine once and for all whether Wonder Man or Vision was really his brother, and used energy induction bonds to force the Avengers to comply.

During the "trial," Grim Reaper cited Vision's actions protecting him during the fight with Hydra as signs of a true brother, but showed his bigotry when he denounced the idea that Simon would ever marry a "mutie" like the Scarlet Witch. He thought Wonder Man sounded and acted more like what he remembered Simon to be, but was surprised to find out Wonder Man was not technically a man anymore, but a cauldron of ionic energies raging beneath the surface. Still, Grim Reaper ultimately accepted Wonder Man as his true brother, and triggered the energy induction bonds to incapacitate the Avengers so that he could murder the Vision uncontested. The bonds didn't stop