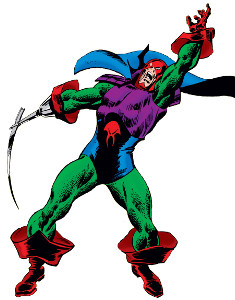 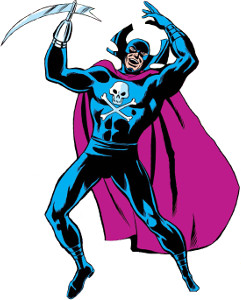 1) The Grim Reaper's original costume was an assault on the senses. He wore a two-tone purple tunic with a red death's head motif on his belt. His belt and leggings were a brilliant green, ending with bright red buccaneer boots and gloves. He also wore a purple cape and a red headpiece, with antler-like protrusions from the sides. Naturally, his right hand held his traditional power-scythe. [Avengers (1st series) #52]

2) While keeping the same basic design, Grim Reaper mercifully streamlined his costume and its color scheme to create his classic look. His costume was now a uniform blue-black color from head to toe, with a white Jolly Roger on his chest.  [Avengers (1st series) #78]

--) After coming back to life as an energy-draining zombie, the Grim Reaper kept the same basic costume, but added a hood to his cape in addition to or instead of his mask. [Avengers West Coast #65] 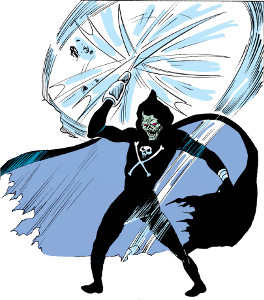 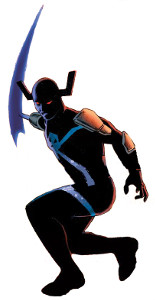 3) As he descended further into the supernatural, Eric Williams drained all the color away from his costume, wearing a fully black hood, cape, and attire. [Avengers (1st series) #352]

--) When he was returned to life through the power of the Scarlet Witch, the Grim Reaper reassumed his classic second costumed appearance. [Avengers (3rd series) #11]

4) Resurrected and transformed again by the power of the Celestial Lifeseed and Deathseed, the Grim Reaper was imbued with Celestial power and armor. His traditional costume now wore with a set of shoulder epaulets while his Jolly Roger glowed with an internal energy. [Uncanny Avengers (1st series) #9]