Roberto R. Reyes was born to Alberto and Juliana Reyes in Hillrock Heights of east Los Angeles, California. A loving family for the most part, Alberto's black sheep brother Eli Morrow was a menacing presence in their lives. Eli was not only an enforcer for the Russia mafia, he was also a serial killer and a practicing Satanist. Juliana often fought with Alberto over the danger his brother 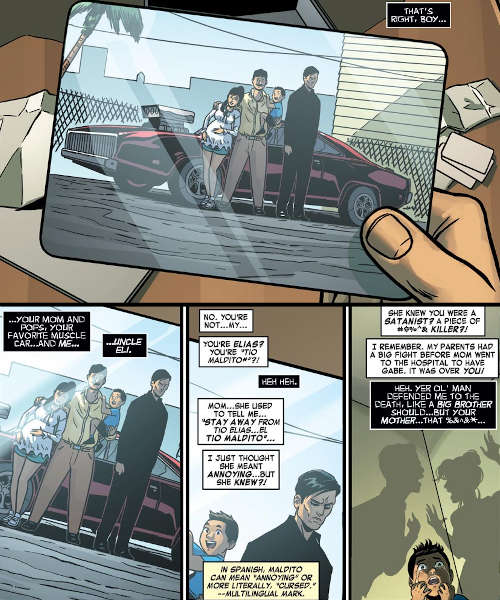 was bringing into their lives. One night, when Robbie was about four years old, Eli lashed out at the pregnant Juliana, pushing her down a flight of stairs. The baby was seriously injured in the fall, and Robbie's brother Gabe was born with physical and mental handicaps. Eli was exiled from the Reyes' residence after that, and eventually met his end when his boss Yegor Ivanov had him killed. [All-New Ghost Rider #11]

Many years later, Robbie Reyes was raising Gabe alone after his parents disappeared. It was difficult for Robbie to keep up his studies in high school, look after Gabe and support them with his job as a mechanic at Camelo's Auto Body Shop. To make ends meet, Robbie was an accomplished driver and occasionally got involved in illegal street racing for extra money. Still he struggled, especially when a local thug named Guero and his posse stole Gabe's expensive electronic wheelchair and broke Robbie's nose when he tried to get it back. 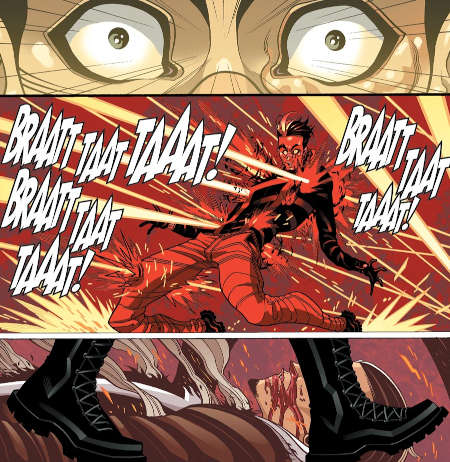 One night, an impressive 1969 Dodge Charger was brought into the shop for a tune-up. Robbie snuck in at night to “borrow” the car for street racing. During the race, Robbie was caught in the spotlight of a helicopter. Fearing the police, Reyes tried to lose them but, despite his skills and the car's maneuverability, he couldn't shake his tail. Robbie finally gave up and drove into an alleyway, getting out with his hands up and surrendering to the vehicle following him. Instead, Robbie was murdered in a hail of gunfire and left bleeding and cold in the alleyway.

Robbie's pursuers were actually paramilitary soldiers who were part of a new drug cartel setting up in Los Angeles. Calvin Zabo, the former Master of Evil member called Mr. Hyde, was interested in building a drug empire in California, mass producing a weaker version of his Hyde formula in little pink pills. His soldiers attempted to build local support among the gangs, showing off their enterprise. However, a gang banger named Grumpy stole seven duffle bags full of pills from Zabo 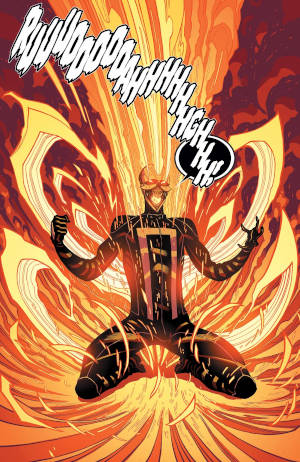 while at their warehouse. Six of the bags were left in the trunk of Grumpy's Charger when his boys dropped it off at Camelo's for repairs. The paramilitary corps therefore killed Robbie to retrieve the drugs and eliminate any witnesses to their operation. [All-New Ghost Rider #1]

But Robbie didn't stay dead. Hellfire rose up from the Dodge Charger and Robbie Reyes was resurrected, seemingly with the power of a Spirit of Vengeance. The Charger itself was transformed as well, supernaturally linked to its driver. The new Ghost Rider and his Hell Charger pursued the soldiers in the name of revenge. Ghost Rider destroyed one of the four Humvees, but was blasted off the L.A. freeway by the other cartel thugs using a rocket launcher. The next day, Robbie Reyes awoke in his bed, alive and healed from his bullet wounds. Even his nose was restored from Guero's beating the day before.

Robbie thought he had just suffered through the worst nightmare in history, but he couldn't get the Charger out of his head. He found the car back at Canelo's and, that night, he prepared to take 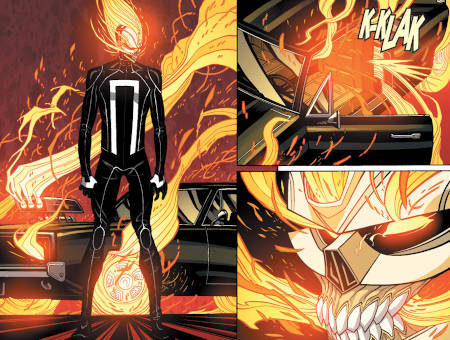 the car out again. Grumpy's boys had come by to pick up the vehicle, though, and saw Robbie making off with their boss' car. When threatened, Robbie spontaneously changed into the Spirit of Vengeance, and made short work of Grumpy's gang. Now certain he wasn't dreaming, Ghost Rider drove to a junkyard and changed back into Robbie before questioning just what was going on with this car. [All-New Ghost Rider #2]

Surprisingly, the car answered him. The Spirit of Vengeance attached to Robbie was actually a human spirit, that of his Satanist uncle, Eli Morrow. Eli's supernatural dealings prior to his death left his spirit linked to his Dodge Charger through an unexplained devil's pact. When Robbie, blood of his blood, died in the presence of the car, Eli was able to reach out, resurrect his nephew and bestow his power upon him. Robbie didn't know the full history of his “Tio” Eli and so Eli's 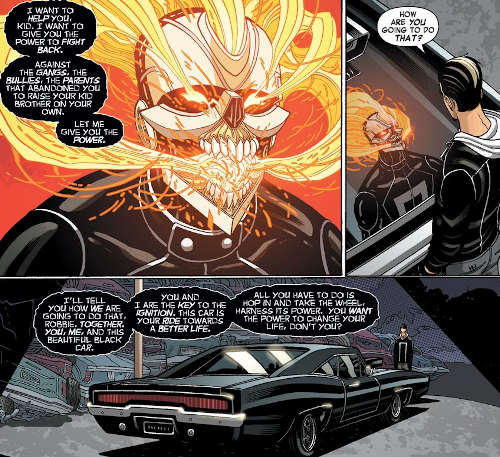 spirit only told Robbie half-truths about their connection, and hid the fact that they were related. Eli spoke of power, vengeance and punishment, and convinced Robbie they were linked together as the new Ghost Rider for a greater destiny.

Grumpy's gang returned to the auto body shop when Robbie was out and shot Camelo and the other employees while retrieving the car. Transforming into Ghost Rider, Robbie was linked to the Charger and so could manifest himself at the site of the car even while it was in motion. He ejected Grumpy's guys from the vehicle, but Grumpy had got a hold of the last bag of pink pills and maxed out on the bootleg Hyde formula. Robbie was caught off-guard by his first superhuman opponent and beaten into the street by Grumpy before he fled. [All-New Ghost Rider #3-4]

Robbie tried picking up extra shifts for money at Canelo's while the other employees were in the hospital. However, a gang war shootout started up in Hillrock Heights between Zabo's paramilitary and Grumpy's gang, and Gabe's school bus was caught in the crossfire. Robbie and Eli reached the scene as Ghost Rider and helped get Gabe and the other children to safety. Ghost Rider 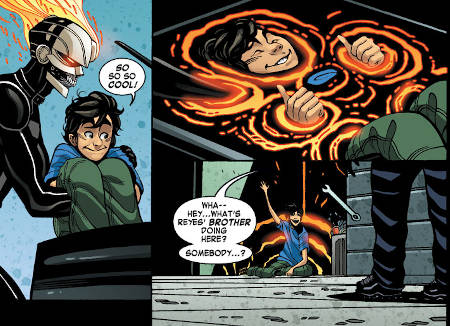 turned on the shooters next and made short work of them, but then Mister Hyde showed up. Robbie remembered his fight with Grumpy and managed to do some damage to Hyde, tag teaming with his Charger. Hyde overreached by trying to power up on the pink pills, only to render himself so overly muscular and mutated that he couldn't hold his form, and reverted back to Zabo. Ghost Rider emerged as a new local hero, La Leyenda of Hillrock Heights. [All-New Ghost Rider #5]